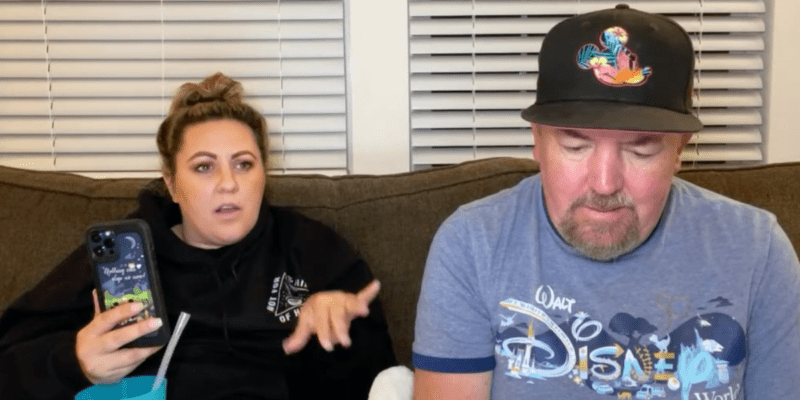 Two Southern California local Disney influencers have become the latest target of the internet’s fury after admitting to going to Disneyland Resort while ill, allegedly with COVID-19.

Spencer and Katie of Best Life & Beyond share their Disney Park adventures on Instagram and YouTube. This week, the couple posted a video in which Spencer goes to Downtown Disney by himself, and Katie is notably missing from the video.

On Wednesday evening, the couple held a live stream for paying subscribers in which they discussed why Katie was missing from the video and their plans for future Disneyland content.

A Disneyland fan shared a screenshot of the live stream to Reddit, which has since been deleted. u/diskneelvr wrote:

Disney Influencers are sick with Covid but are going to Pirates of the Caribbean Opening tomorrow at Disneyland. Is there a way to report this?

Fans in the comments suggested e-mailing or calling Disneyland’s Guest services division. This comment from u/life_is_a_show got 50 votes of support:

They should be banned from the parks for life for this.

u/TheVoicesofBrian suggested reporting them to YouTube and other social media platforms for “being reckless with the safety of others.” This would be a significant blow to the couple, as influencers make a large portion of their income from ad revenue and sponsorships:

It took some time, but most Social Media platforms are now taking this seriously.

Get ’em demonetized and kicked off.

Inside the Magic obtained the entire 1.5-hour-long private stream, in which Katie coughs throughout and both Katie and Spencer sound stuffed up. The couple refuses to confirm or deny having COVID-19 but describes symptoms consistent with the Omicron variant.

In a clip made public by a fan, Katie contradicts herself, saying they didn’t do any testing but that there was no specific explanation for her illness:

“I had vomiting, and then it went to like, almost like a cold… I don’t know what it was; I had like superbug… We were hanging out with… my niece, and she got really sick… No tests, or testing… didn’t know what was going on.”

Another public clip shows the couple discussing their plans to go to Disneyland Park on Friday for the reopening of Pirates of the Caribbean. Katie says it sounds like Spencer is getting sick, too, after being at Disneyland Resort that same day:

Later in the live stream, the couple discusses taking a trip to a fast-food restaurant that night – again disobeying quarantine guidelines if either of them genuinely has COVID-19.

This isn’t the first time Best Life & Beyond has been in the spotlight. A petition to ban the couple from filming at Disneyland has 213 signatures on Change.org:

Katie Slockbower of Best Life and Beyond continues to break park rules and harass and attack park goers while recording her vlog posts at the park.  During one video she openly mocks a handicapped woman riding a scooter and during another vlog she attacks an African American family especially the children while on the Mark Twain after cutting the family off.  She has a history of making false claims against guests at the park.  She uses staff and security at the park as a weapon and constantly video’s about how she will use them against park goers.

Her attitude and actions goes directly against the values and magic of Disney and they need to be stopped for creating videos inside the park that are meant to intimidate guests and promote selling of their personal merchandise.

Katie & Spencer of Best Life & Beyond released the following statement on Saturday:

The assertion that they had the disease was fan speculation based on Katie’s symptoms, exposure, and, at the time, lack of known testing.

Face masks are only required in First Aid and health care settings at Disneyland Resort. Regulations and rules are subject to change at any time.

Check Disneyland Resort’s COVID-19 guidelines before your trip to stay updated on the latest requirements.