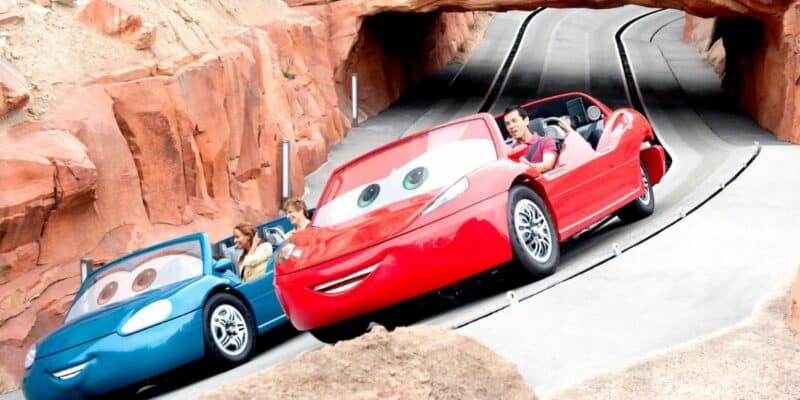 The last Guests are riding Radiator Springs Racers at Disneyland Resort before it goes down for an indefinite refurbishment next month. The already popular ride regularly boasts hours-long wait times as Guests get their Cars (2006) fix in while they still can!

Some Guests skip the wait by utilizing the Disney Genie+ and Lightning Lane service – a paid version of the now-retired FastPass. But others try to cheat their way to the front.

Reddit user u/Qwerty-4natural witnessed a group of teens jumping from the Single Rider Line to the Lightning Lane line at Radiator Springs Racers last weekend. Another group saw the teens and followed suit. While the Guest was frustrated, they decided not to say anything at first.

But as the Guest waited, they noticed the same group of teens jump from the Single Rider Line to the Lightning Lane line again. And that was the final straw.

“At that point I was frustrated enough that I recorded them jumping into the LL, flagged down a cast member, and showed them the recording,” the Guest recalled. “They watched it twice, thanked me and said that it was basically theft, and then proceeded to let my wife and I into the lightning lane for saying something. “

The Guest wasn’t sure if the teens were kicked out of Disney California Adventure or reprimanded for their actions. But their experience proves it’s always worth it to pay attention!

Radiator Springs Racers opened alongside Cars Land on June 15, 2012. The ride is considered an updated version of Chevrolet Test Track in EPCOT at Walt Disney World Resort. From Disney:

Start your engines! Zoom through the desert landscape of Cars Land, inspired by the Disney and Pixar movie Cars.

Have you ever seen line jumpers at Disneyland Park or Disney California Adventure?