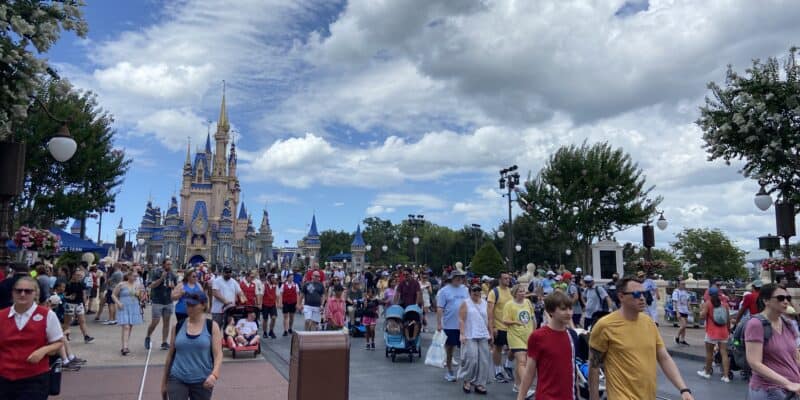 If you have read any of our stories over the last few weeks, then you will surely have seen a few stories about fights at theme parks. Shockingly, a few included altercations at The Walt Disney World resort a place that prides itself on being “The Most Magical Place on Earth.”

These incidents are not just limited to Disney, however. Universal Studios has also seen a few fights at the Park recently, and this apparent uptick in fights is not something to look away from and forget.

Theme parks across the United States have all been gaining an unwanted reputation for having violent teen brawls and agitated Guests.  While some of these altercations did not result in any serious injury, Guests are starting to feel way less safe when visiting.

“It’s something we’ve never really seen in our theme parks until last year,” said Dennis Speigel, an industry expert with International Theme Park Services. “Guests are shorter tempered as a result of the pandemic. The most minor altercation will set something off.”

This comes from a new story shared by Daily Press in which author Brady MacDonald discusses this concerning increase in theme park fights.

As stated above earlier, these fights were not just limited to Disney. Last month, Knott’s Berry Farm was forced to close several hours early due to an overwhelming amount of violent crowds fighting across the entire Park.

Knott’s Berry Farm typically closes at 11 p.m., but the Park reportedly started shutting things down around 9 p.m. The California theme park eventually introduced a chaperone policy which was put in place in order to cut down on the number of unwatched teens at the park.

As part of this commitment, we have added additional security protocols and operational policies. A new Chaperone Policy went into effect on Fridays, Saturdays, and Sundays at both Knott’s Berry Farm and Knott’s Soak City in July. This policy will now be extended to all event nights of Knott’s Scary Farm. In addition, a bag policy will be implemented for Knott’s Scary Farm. Guests will not be permitted to bring bags larger than 6.5” x 4.5” x 2” into the park, including purses, backpacks, or diaper bags during Scary Farm operation. All bags will be searched prior to entry.

Chaperones must accompany their party during entry, remain inside the park during their visit and be available by phone throughout their stay. Guests ages 17 years old or younger who are found inside the park unaccompanied by a chaperone will be subject to ejection.

However, these fights are not just limited to angsty teenagers, at least according to Speigel. “It’s not relegated just to teens,” Speigel said during a phone interview. “You’re seeing adults get into fights.”

As we reported, a fight broke out at the Magic Kingdom in Walt Disney World last month, sending social media and the news ablaze. The fight was intense, occurring in the Fantasyland section of the Park. The incident involved several Guests who all looked well over 18 years of age. The incident was shared on spaces like Twitter and TikTok shortly after.

Another incident unfolded on one of the Walt Disney World trams, with several Guests screaming at each other. The fight occurs at one of the tram drop-off/pick-up stations at Disney World between a Guest on the tram and others waiting to get on. Cast Members attempt to handle the situation, but the Guest starts yelling uncontrollably from the tram. We are unsure what happened after this video was recorded.

Another fight broke out at Walt Disney World recently, though this time it was more verbal. A video recording of the fight was shared on social media. The fight occurred at one of the tram drop-off/pick-up stations at Disney World between a Guest on the tram and others waiting to get on.

Cast Members attempt to handle the situation, but the Guest starts yelling uncontrollably from the tram. We are unsure what happened after this video was recorded.

Please note that Disney Cast Members and security officials are always at the theme parks in order to maintain a safe environment as much as possible. If you ever witness activity such as a fight or anything of this nature, or if you are ever concerned when visiting one of the Disney Parks, be sure to find the nearest Cast Member or report your issue with Guest Relations, located in each of the Disney Parks

The situation unfolded after the group of Guests refused to leave the Park, with one deputy attempting to detain a group member where a struggle ensued, according to Constable Mark Herman.

A man was also arrested after allegedly pushing a police officer at Six Flags Great America. The man is also alleged to have hit a security guard in the face. This all transpired during a fight at the theme park.

Much like Knott’s Berry Farm, The Universal Studios Resort in Orlando, Florida, recently revealed a new policy it will implement in order to keep Guests safe. Guests under 21 will now have to abide by a curfew on Fridays, Saturdays, and Sundays, effective immediately.

Guests under the age of 18 visiting will be escorted out of CityWalk by security after 9 p.m. if they do not have a parent or other member of their group who is over 21 accompanying them. Guests over 18 but under 21 will be allowed to remain in CityWalk after 9 p.m.

Guests under 21 will not be allowed through hub security after 9 p.m. if they are unaccompanied by an older Guest. There are a few exceptions, however:

Pennsylvania’s Waldameer Park has had to deal with a series of fights as well. In early July, a fight between two Waldameer passholders sent one to the hospital. One Guest was banned from the Park.

Amusement Industry Consulting owner Jerry Aldrich said the growing number of theme park fights could simply be a result of increased reporting, something that social media plays a big part in. “There are more fights than I can recall having a problem with,” Aldrich said during an interview.

“Theme park guests as well as the public in general have changed,” Aldrich said. “Our society doesn’t penalize like we used to. The kids think they can get away with it and they normally do.”

Attractions Magazine Editor and Publisher Matt Roseboom noted how “rare” these violent outbreaks were before grabbing headlines in recent months. “It does seem like it’s been in the news a lot lately,” Roseboom said.

“With TikTok, it’s easy to grab a video, put it up, share it and then it gets spread around more than before,” Roseboom said. “There’s probably been fights in the past that nobody happened to record and just didn’t get any publicity. People are uptight. They’re on edge with COVID,” Roseboom said. “They’re just now getting out. This is the first full summer people are finally getting into the parks after a couple of years.”

Whether these actions are the result of people being “locked up” during 2020 or not, there’s no denying the uptick in fights at theme parks, at least with reports of altercations that is.

Oaks Park in Portland, Oregon was forced to shut down last month after a fight broke out. The amusement park shut down an hour and a half early due to “unruly behavior and altercations involving a number of patrons.”

During the altercation, a security guard reported that they heard a teenager on the phone tell someone to “come shoot up the Park.” However, police questioned the teen, and they said that they were only calling for a ride home and that someone else from an opposite group had made the statement.

More recently, a shooting took place at Six Flags in Illinois, which left multiple people injured, as reported by The Chicago Tribune.

A car drove into the Six Flags parking lot around 7:50 p.m. and headed towards the entrance. One person got out of the sedan and began shooting in what authorities say was a targeted attack on another individual. They then got back into the sedan and fled the scene. A boy, 17, from Aurora, Illinois, and a woman, 19, from Appleton, Wisconsin, were shot. Both were shot in the leg and treated at Advocate Condell Medical Center.

Do you feel safe when visiting theme parks?