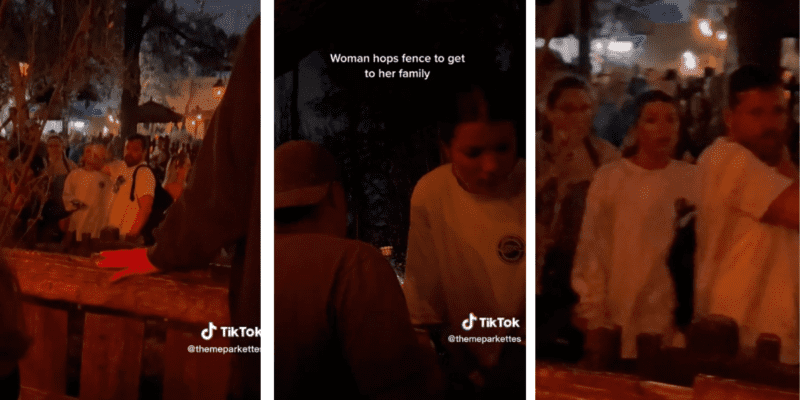 Disneyland Resort and Walt Disney World Resort are home to some of the most cutting-edge Theme Park attractions in the world… So lines can get long!

Some Guests skip the wait by utilizing the Disney Genie+ and Lightning Lane service – a paid version of the now-retired FastPass. But others try to “hack” their way to the front by cutting in line.

But not all Guests mean to cheat the system. Sometimes, nature calls… Especially with kids. It’s best to be understanding of others’ situations and avoid confronting other Guests about potential line-cutting. Instead, alert a Disney Cast Member if you think someone is breaking the Disney Parks rules. Some Guests have even been rewarded for doing so!

This week, a man confronted a woman returning from the bathroom and refused to let her pass, leading to a fight.@themeparkettes witnessed the incident while waiting for Seven Dwarves Mine Train at Magic Kingdom and shared this video on TikTok:

Note: This is not my normal content. I try to share only helpful and fun theme park content and travel tips. But at every park I’ve been to, at least once a day, the question of “is it saving a spot or is it cutting?” comes up. Every so often, it leads to an argument. This one was louder than most. And because of where it was in line, could not have been handled by a Cast Member, so it was really up to the people in line, the “court of public opinion” to decide. But no one seemed to definitively know if it was against the rules or not. What do YOU think the rule should be? #themeparktiktok #themeparktok #disneyfights #linecutting #themeparkqueue

“I’m on my period. I had to change my tampon. I was in the bathroom. I have been waiting an hour and a half,” the woman pleaded with the male Guest who blocked her way.

“It’s one person. You’re waiting in line for a ride,” one family member yelled.

“No. No,” the male Guest repeated , shaking his finger and blocking the Guest from getting to her family.

Eventually, the woman’s father got involved. “Hey, buddy. She was stuck here,” he said. “She had to go to the bathroom. I’m sorry.” But the man refused to let the woman through.

As a last resort, the woman hopped over a fence and trekked through a garden to get to her family. Onlookers clapped as the man continued yelling at her. “She was already up here, and you went after her,” the father exclaimed before moving forward in the line.

“It is in a spot where there really couldn’t have been a Cast Member getting involved,” the witness explained. She asked her followers if saving a spot in line for a family member while they use the bathroom is acceptable.

Overwhelmingly, fans said yes – as long as it’s just one Guest or a parent and a child leaving to use the restroom. “1 person is fine, or a parent with a kid, fine. But more than 2, absolutely not!” @disneymama_13 wrote.

“There should be a paper pass handed to someone who exits the line for an emergency bathroom to bring back through the line to show the time and date,” @ttmc_karenmorgan suggested.

A Disney Cast Member (@toritreble) said she’d witnessed many heated arguments while families tried to reunite in line and suggested that Guests should always ask for assistance when returning to a queue. “People do get verbally harassed or physically assaulted over trying to reunite with their parties, so it’s best to talk to a CM while trying.”

Do you think it’s acceptable for a family to save a spot in line for someone in the bathroom?