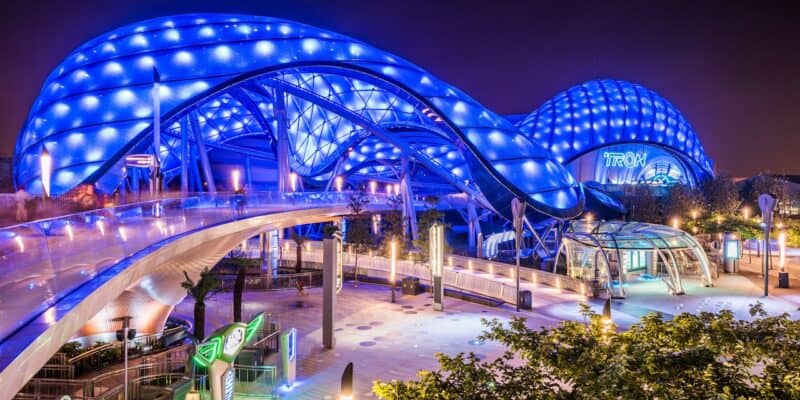 If you’re a diehard Disney fan, you likely have an entire route mapped out for how you’ll be navigating lands like Tomorrowland, Frontierland, Adventureland, and Fantasyland in Magic Kingdom at Walt Disney World Resort.

These magical lands give Disney Park Guests a unique look at many iconic attractions with distinctly-themed decorations and much more.

In Tomorrowland, you can take a ride on Space Mountain, then hit up the Tomorrowland Transit Authority PeopleMover for a look at tomorrow’s future today. Walt Disney’s Carousel of Progress is a classic, and Buzz Lightyear’s Space Ranger Spin is a blast. Don’t forget to head over to the Monsters Inc. Laugh Floor, as well, to see Mike Wazowski and enjoy a hilarious and interactive performance.

The most anticipated attraction coming to Magic Kingdom will also reside in Tomorrowland: TRON Lightcycle/Run.

The coaster has been under construction for multiple years now and Disney fans have been anxiously awaiting the day when they can ride the coaster. At the D23 Expo in Anaheim, CA this past September, Disney made an announcement that the TRON attraction would be opening in the spring of 2023.

However, it seems that there will have to be at least a little bit of work to the show building of the attraction before it’s presented to Guests.

User DisneyWorldTom shared a video on TikTok where you can see mold and mildew on the show building.

Of course, none of this shows structure issues that will have to be fixed, but it does show just how long the building has been around.

Are you looking forward to TRON Lightcycle/Run opening in Magic Kingdom?