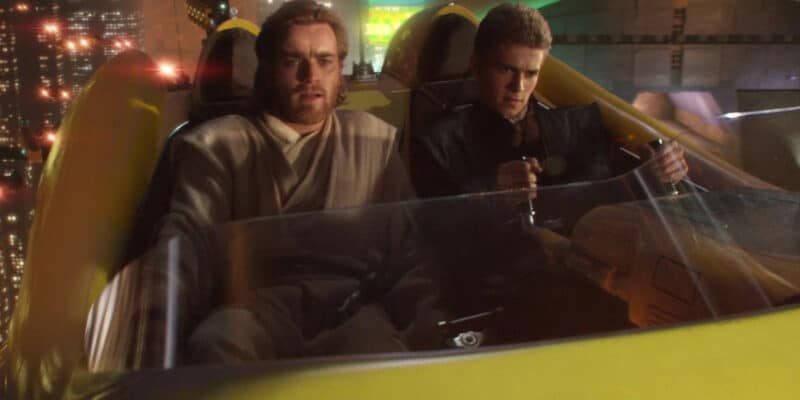 With just about two weeks to go until Obi-Wan Kenobi releases on the Disney+ streaming service, Star Wars legends Ewan McGregor (Jedi Master Obi-Wan Kenobi) and Hayden Christensen (Darth Vader/Anakin Skywalker) are gearing up for their official return to a galaxy far, far away.

The duo have been doing a press tour for the live-action show and recently stopped in Berlin, Germany, where they made time to go out together. The actors also thrilled fans by unexpectedly stopping for selfies and autographs during their evening together.

One report noted that 41-year-old Christensen and newlywed 51-year-old McGregor were more than happy to spend time with their adoring public:

Fans flocked to the Hollywood stars as they attempted to make their way to their awaiting cars to whisk them off to their hotels.

The pair who recently have kicked off the press tour for the limited series, stopped to pose for photos as fans waited patiently to catch a glimpse of their heroes.

While the majority of fans looked for a selfie, a selection of the crowd asked for autographs which Hayden delightfully signed while wearing a face covering

The outlet also Tweeted about the outing, noting:

Newlywed Ewan McGregor catches up with Star Wars co-star Hayden Christensen in Berlin ahead of Obi-Wan Kenobi release on Disney+.

#EwanMcGregor and Hayden Christensen appear at a photocall in Berlin. #ObiWanKenobi

Thanks to denniswerth on IG.

#EwanMcGregor and Hayden Christensen appear at a photocall in Berlin. #ObiWanKenobi

In the ensuring years, however, nostalgia has reigned and the fandom is now thrilled to see McGregor’s Kenobi reunite with his former Padawan in the upcoming Obi-Wan Kenobi series.

In addition to McGregor and Christensen, Bonnie Piesse and Joel Edgerton are set to reprise their prequel roles as Luke’s Aunt Beru and Uncle Owen Lars, while newcomers like Moses Ingram, Kumail Nanjiani, Indira Varma, Rupert Friend, O’Shea Jackson Jr., and Sung Kang will join the Star Wars story for the first time.

Numerous other cameos are also expected, including the return of Princess Leia (Vivian Lyra Blair) and the reported appearance of droid bounty hunter 4-LOM, who originally appeared in the iconic “bounty hunter scene” in Star Wars: Episode V – The Empire Strikes Back (1980).

Are you looking forward to this new Star Wars series?