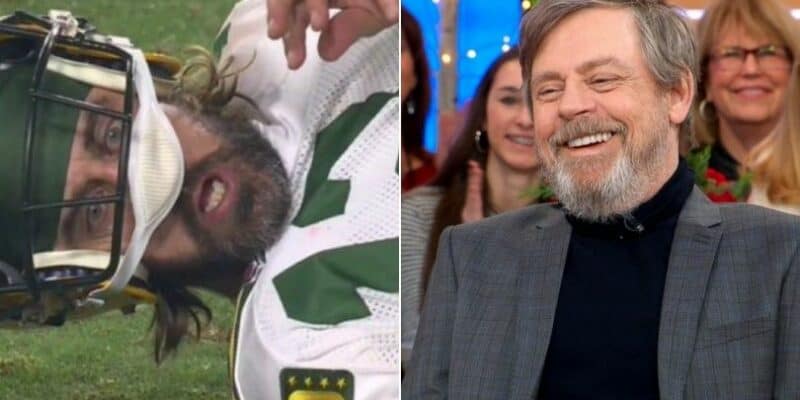 Recently, NFL quarterback Aaron Rodgers — who has played for the Green Bay Packers organization since 2005 — came under fire when news broke that he had been untruthful about receiving the COVID-19 vaccination.

ESPN summed up the situation in a recent article:

…[Rodgers acknowledged that] he might have misled people about his vaccination status — but stood by his decision — and said he hoped the reaction will be the same as always when he’s introduced at Lambeau Field on Sunday.

In his weekly appearance Tuesday on “The Pat McAfee Show,” Rodgers attempted to clarify some of the points he made Friday, which drew criticism both in and out of the sports arena.

Rodgers remains on the reserve/COVID-19 list after testing positive last week, when it was also revealed that he was unvaccinated despite him telling reporters in August that he had been “immunized.” The earliest he can be cleared is Saturday, one day before the Packers host the Seattle Seahawks.

Now, an unlikely source has weighed in on the Rodgers drama. Star Wars icon Mark Hamill is less-than-pleased with Rodgers’s clothing choice when he defended himself on former Indianapolis Colts punter McAfee’s show.

Hamill noticed that Rodgers — a known Star Wars fan — chose a Star Wars: Episode IX – The Rise of Skywalker sweatshirt for his recent appearance. The Things We Do In the Dark actor, who has an active social media presence, took to Twitter to say:

Of all the sweatshirts he could have worn, he had to take full responsibility in THAT one?

Of all the sweatshirts he could have worn, he had to take full responsibility in THAT one? 😩 https://t.co/c4vntkHAHg

Hamill has been vocal about his support of the vaccine, so his reaction is unsurprising. Rodgers has not responded to the Star Wars legend at this time.

He then, of course, made his epic return to the Star Wars universe as a CGI version of Return of the Jedi-era Skywalker in Jon Favreau and Dave Filoni’s The Mandalorian Season 2 finale episode (“Chapter 16: The Rescue”), shocking Star Wars fans everywhere.

The Jedi then left with Grogu and R2-D2 in tow, indicating that there is far more of his story left to tell. While we don’t know at this time if Hamill will continue portraying Skywalker in CGI form — this seems unlikely as a long-term solution, frankly — or if another actor, like Marvel’s Sebastian Stan, will be cast in the role, it seems to be all but a foregone conclusion that Skywalker will appear again in the “Mando-verse”.

Favreau, Filoni, and their team are currently working on at least three series — The Mandalorian Season 3, Ahsoka, and The Book of Boba Fett. The latter is set to debut on December 29, 2021.

Another Mandalorian spinoff, Gina Carano’s Rangers of the New Republic, is no longer in “active development” following the controversial actress’s firing in February 2021.

Rumors of a full Luke Skywalker series remain unconfirmed at this time.

What do you think about Hamill’s comments?