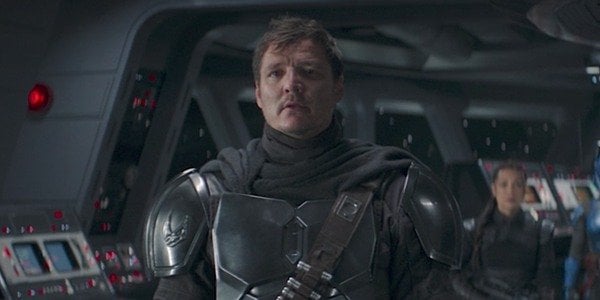 Last year, The Mandalorian‘s leading man, Game of Thrones alum Pedro Pascal (Din Djarin) indicated that the series would experience a major time jump at some point during its upcoming third season.

Although Pascal has not yet been on set due to work on his new HBO adaptation of the video game The Last of Us, filming for The Mandalorian Season 3 has gotten underway with actors like Carl Weathers (Greef Karga) and Giancarlo Esposito (Moff Gideon) already reporting for duty.

Exclusive: Photos and video of an unknown Mandalorian on set of ‘The Mandalorian’ season three!

It’s worth noting that there are a few different purposes this particular Mandalorian warrior could be serving on set. The most obvious answer is that this is simply a stunt double or stand-in for Pascal while he finishes shooting The Last of Us.

However, the armor looks more dinged up than Pascal’s shiny Beskar steel from The Mandalorian Season 2, so if this actor is, in fact, supposed to be Djarin, it is likely that we are seeing the character at an earlier point in the Star Wars timeline. Whether we’ve only gone back to Season 1 — set approximately five years after the original trilogy ended with Star Wars: Episode VI – Return of the Jedi (1983) — or even earlier in Djarin’s life, perhaps when he was a child learning the tenets of ‘the Way of the Mandalore’, remains unknown.

It would also be remiss to not mention the ongoing rumor that Djarin will be joined by 75 other Mandalorians for an epic scene during Season 3. It is possible, though not particularly likely, that this scene is currently being filmed.

Finally, there is, of course, the chance that we’ve made a huge jump in the timeline and entered the World Between Worlds. It is most likely that this Force portal will debut in live-action in Ahsoka during Ahsoka Tano’s (Rosario Dawson) search for Grand Admiral Thrawn and fellow Jedi Ezra Bridger, but there is a slight possibility we’ll see it in The Mandalorian first.

Favreau and Filoni have continued their famously tight-lipped production process — there’s a reason none of us had even the slightest inkling Jedi Knight Luke Skywalker (CGI Mark Hamill) was returning until The Mandalorian Season 2 finale episode (“Chapter 16: The Rescue”) – so other than the fact that the Darksaber storyline with Gideon and Bo-Katan Kryze (Katee Sackhoff) will continue, details about The Mandalorian‘s third season are scant.

Perhaps the biggest question at this time is when we will see Grogu (AKA “Baby Yoda”) again in the Star Wars universe. In last season’s finale, the 50-year-old infant was spirited away by Skywalker to complete his Jedi Order training, meaning that he is no longer accompanying Djarin at all times.

With two known spinoff shows, Temuera Morrison and Ming-Na Wen’s The Book of Boba Fett — officially debuting on December 29, 2021 — and Rosario Dawson’s Ahsoka, in the works (Gina Carano’s Rangers of the New Republic is not in “active development”), plus a rumored Luke Skywalker series coming down the pipeline, though, there is plenty of room for all of the stories the “Mando-verse” needs to tell.

What do you think will happen in The Mandalorian Season 3?