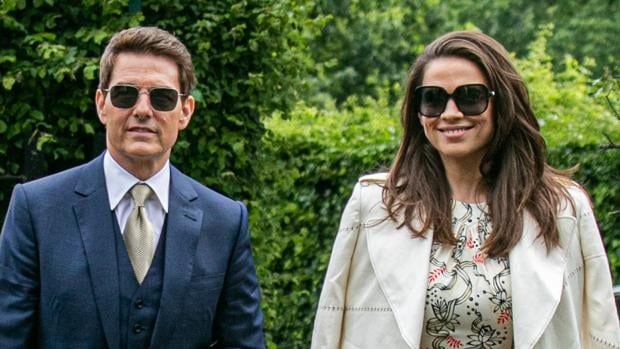 Tom Cruise (MISSION: Impossible, Risky Business) is on top of the box office for the first time in years with Top Gun: Maverick (2022).

The movie star’s personal life, however, does not seem to be going as swimmingly. Numerous reports have surfaced that Cruise, 59, has dumped his MCU star girlfriend, Hayley Atwell, after she supported him on the red carpet at Maverick’s London premiere on May 19, 2022.

‘What was working behind closed doors didn’t work out so well when it was made public, and the fanfare around them as a couple exploded again,’ the source stated.

The source also insisted that the couple’s romance was ‘genuine’, stating ‘In spite of some rumours to the contrary, it was never just for the cameras.’

The duo were originally linked in December 2020 before splitting for the first time in September 2021. Neither of the actors have issued official statements regarding their current relationship status.

Atwell, 40, is best known for her role as Peggy Carter/Captain Carter in Kevin Feige’s Marvel Cinematic Universe. She most recently appeared as a variant of her character in Doctor Strange In the Multiverse of Madness (2022).

Captain Carter was featured as part of the Illuminati, which also featured a variant of Doctor Strange (Benedict Cumberbatch), Monica Rambeau/Captain Marvel (Lashana Lynch), and the introduction of Reed Richards/Mr. Fantastic (John Krasinski).

Ironically, Cruise himself was supposed to play a version of Robert Downey, Jr.’s fan-favorite Tony Stark/Iron Man in the scene, but his cameo was cut from the film when director Sam Raimi axed 42 minutes of footage.

At this time, following the Sherlock Holmes star’s Marvel Studios exit, it is unknown when exactly an Iron Man variant will appear in the MCU — or if Tom Cruise will ultimately get the chance to play the character.

As for Atwell, she recently spoke out about Captain Carter’s future in the Marvel Cinematic Universe:

“I have no news for you. Sorry. But I share your enthusiasm. And I would love to feel that if Marvel did find a home for her that it’s a home that feels worthy of her in terms of evolution as a character and development as a character. And the experience I’ve had in playing her has given me the most incredible opportunity to hone my particular craft in this franchise. And I want more to do and because I feel that fans deserve that.”

“You know, in some ways a lot of people [think] that she’s a minor player and it wouldn’t make sense if I would continue to be a minor player in that if it felt like well this is a different time and also particularly as a woman with everything that’s happened in the last few years.”

Prior to appearing in Doctor Strange 2, Atwell returned to voice Captain Carter in the first episode of Marvel’s animated series, What If…?

How do you feel about Tom Cruise reportedly dumping Hayley Atwell?