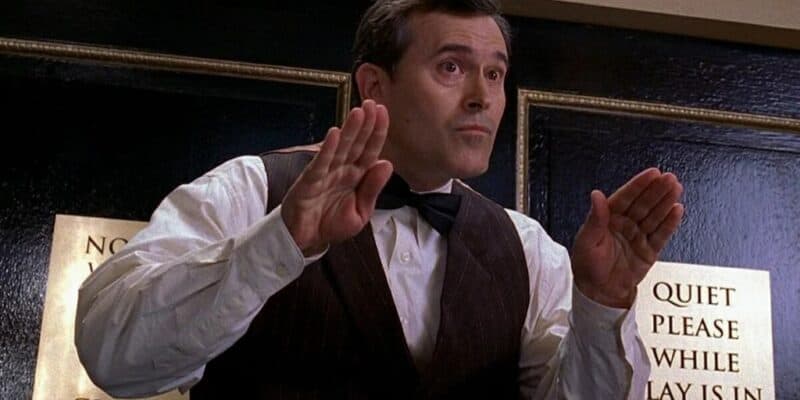 Bruce Campbell doesn’t think his cameo will make the final cut for Doctor Strange in the Multiverse of Madness (2022).

After hearing about how many cameos are reported to be in Doctor Strange 2, it isn’t surprising that Campbell thinks he might not make it into the movie. The Doctor Strange sequel is rumored to include many old Marvel cameos such as Ben Affleck’s Daredevil, the old X-Men cast, Hugh Jackman’s Wolverine, and a tease for the new Fantastic Four. The movie will also introduce fans to America Chavez (Xochitl Gomez) and include Zombies, Captain Carter, and potentially Ryan Reynolds’ Deadpool.

While speaking on the Radio Labyrinth podcast, Campbell shared how his cameo has to compete with all the new additions Raimi has to add into the film:

“It’s hard with the Marvel movies, it’s hard to even lie because I could be caught out as a liar in my lie. If I told you I think I’m not in it, I could still wind up being in it. They make about 86 of these movies at the same time, so even Sam Raimi’s had to film additional material that was not in the original script. ‘Because now we’re going to put Captain Stinko in, and introduce him at the end because we’re going to spin him off here.’ So they’ve always had to add and subtract as they go.”

Campbell added that he felt that anything was on the table to be cut and said that Cumberbatch should even be “worried” about some of his cameos not making in the final cut:

“Even if I were to have done a pivotal cameo — because I only do pivotal cameos, and I can explain if you see it — we won’t really know the answer until May. If I were [Doctor Strange actor] Benedict Cumberbatch, I would be worried that I would get cut out.”

At first glance, it seems that Campbell is joking about Cumberbatch having some cameos cut, but the movie will include several variants of Strange. It’s very likely that some of the more bizarre variants will end up getting cut to give more screen time to some other variants.

The movie has already confirmed three other variants of Doctor Strange; Supreme Strange, Defender Strange, and, Doctor Strange Supreme. While this might get confusing seeing Cumberbatch playing several different versions of the same character, it will be interesting to see how many more variants of Strange will pop up.

Campbell had previously said that his cameo let him play a very cool character who had a special role in the film. Some fans immediately wondered if he played a variant of Reed Richards that was a part of the Illuminati Council with Patrick Stewart’s Charles Xavier.

Fans know that Raimi loves to have Campbell in his marvel movies as the actor had a cameo in every Tobey Maguire Spider-Man film. It would be heartbreaking if the actor gets cut from the film as Marvel fans hope that Raimi continues the tradition.

Do you think Bruce Campbell’s cameo will be cut? Who do you think Campbell is playing in Doctor Strange 2? Let us know what you think in the comments section below!