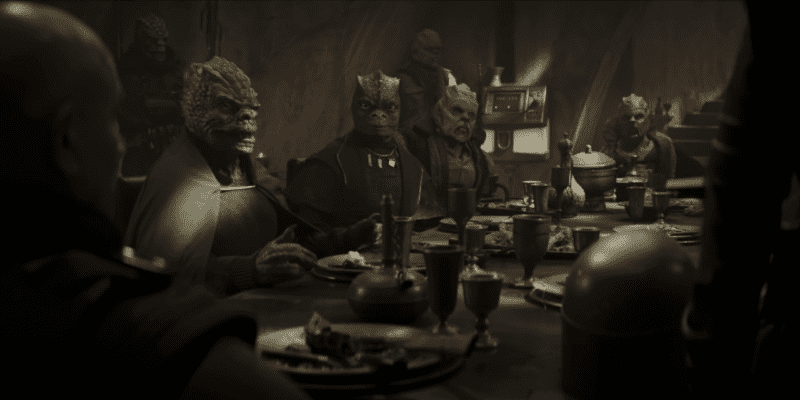 Recently, the Star Wars franchise has been introducing a number of fan-favorite animated characters in live-action for the very first time.

Anakin Skywalker’s Padawan Ahsoka Tano, for example, became a Star Wars icon when Ashley Eckstein voiced her in Dave Filoni’s Star Wars: The Clone Wars, then blew fans away when Rosario Dawson portrayed her in Filoni and Jon Favreau’s The Mandalorian last year. Dawson, in fact, is set to return to the “Mando-verse” in her own series, Ahsoka.

Dawson’s episode of The Mandalorian Season 2 — “Chapter 13: The Jedi” — also officially introduced the name of Star Wars Rebels villain Grand Admiral Thrawn (voiced by Lars Mikkelsen). He is expected to make his live-action debut, alongside Ezra Bridger (voiced by Taylor Gray) in either Ahoska or The Book of Boba Fett, which is set to debut on December 29, 2021.

Other Rebels Ghost crew characters, including Sabine Wren (voiced by Tiya Sircar) and Hera Syndulla (voiced by Vanessa Marshall) are also expected to show up in live-action in the near future.

Now, however, it seems that Filoni may have already given fans a sneak peek at the live-action version of another one of his animated characters, Trandoshan Jedi information Cid (Rhea Perlman), who was introduced in Clone Wars sequel, Star Wars: The Bad Batch.

Cid is a key player in The Bad Batch. She sends female clone Omega (Michelle Ang) and Clone Force 99 — Hunter, Wrecker, Tech, and Echo (Dee Bradley Baker) — on the mercenary missions that allow them to fund their lives while they are on the run from Governor Tarkin and other Imperial forces after escaping Kamino.

Thanks to the first official trailer for The Book of Boba Fett, some fans are convinced that we won’t have to wait until The Bad Batch Season 2 to see more of the fan-favorite character.

Redditor randish87 shared a screenshot from the trailer and wrote:

Anyone else think the trandoshan in the middle could be cid?

Anyone else think the trandoshan in the middle could be cid? from starwarsspeculation

TB2331 isn’t putting anything past Filoni, who already connected Cid to both Boba Fett — formerly known as “Alpha” — and his “sister” Omega, who may be getting a live-action series of her own:

Knowing Filoni, it could be very possible. And if she is, Boba and Omega could have a family reunion

Not everyone is convinced, however. Some fans like JAKEJITSU22 don’t think this live-action Trandoshan could possibly be Cid:

I thought he said they were all in Jabba’s organization. So unless Cid moved her operation to Tattooine and started working for Jabba I doubt it.

Although little is known about the specific plot of Robert Rodriguez’s The Book of Boba Fett, Temuera Morrison (Boba Fett) and Ming-Na Wen (Fennec Shand) will star in the series, which will be set on Tatooine. Favreau has billed the show as “the next chapter” of The Mandalorian, and cameos by characters like Mandalorian leading man Din Djarin (Pedro Pascal), Marshal Cobb Vanth (Timothy Olyphant), and even Han Solo (CGI Harrison Ford) have been rumored, but remain unconfirmed at this time.

Are you looking forward to The Book of Boba Fett? How much do you think the series will connect to The Bad Batch?