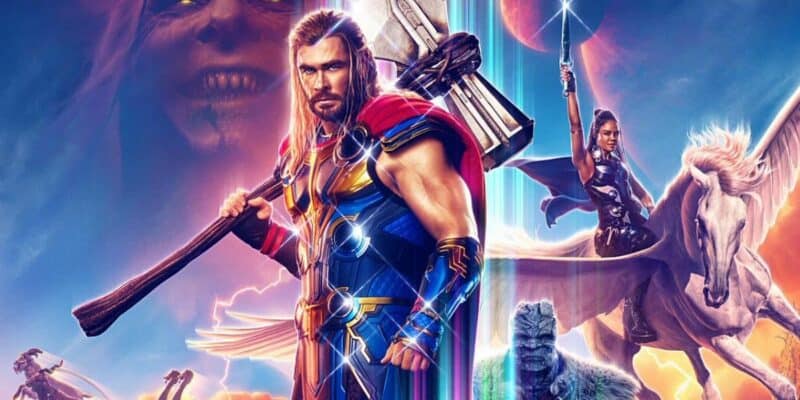 It would appear that many Marvel fans and critics really don’t like Thor: Love and Thunder (2022), although this hasn’t stopped it from grossing over $760 million worldwide and becoming the sixth highest-grossing film of 2022. Nevertheless, the chances are that if you mention the film to a fellow Marvel fan, they’ll probably tell you how much they hate it!

But is it all doom and gloom for the fourth Thor movie in the series? Does it have any redeemable qualities? Well, it depends who you ask, because while there are many haters, there are undoubtedly some Marvel fans who like the movie, or dare we say love it! However, even if you’re one of the haters, you may still agree that the film gets a few things right.

So here are seven great things about the widely hated Thor: Love and Thunder…

First of all, let’s address the screaming goat in the room. One of the biggest criticisms about Thor: Love and Thunder is the humor, which is a quality its predecessor Thor: Ragnarok (2017) was praised for. There’s no denying that director Taika Waititi takes the level of humor a lot further in Thor: Love and Thunder, and while this is a huge turn-off for many Marvel fans, there’s a big difference between the number of jokes and the quality of jokes.

There are many hilarious moments in the film — perhaps too many, sure, but we refuse to believe you don’t burst out laughing at least once. Whether it’s Thor (Chris Hemsworth) saying to Gorr the God Butcher (Christian Bale), “What is pain, but a construct_” before crying out that Gorr’s blade is “really sharp” against his throat, the montage in which Thor and Jane Foster’s relationship is in decline, or any scene involving Zeus (Russell Crowe), Thor: Love and Thunder is a laugh riot.

Thor: Love and Thunder might be tonally inconsistent when it comes to the humor and its more serious moments, but its action sequences warrant no criticism. As usual, Chris Hemsworth is on top form as the axe-wielding God of Thunder, who tears through his enemies like a hot knife through butter. One action sequence in particular is the battle in New Asgard, where Gorr the God Butcher has summoned “Shadow Monsters” to kidnap all the local children.

But Thor isn’t the only hero in the film who delivers during this sequence, as it’s the first time we meet Natalie Portman’s Mighty Thor, the hammer-wielding Goddess of Thunder. And she’s nothing short of incredible, especially when, after sending Mjolnir smashing to pieces against a giant beast, it returns to re-assemble in her hand. And at risk of alienating you yet again, we also happen to love the scene where all the New Asgard children are imbued with superpowers!

Just like Thor: Ragnarok and the Guardians of the Galaxy movies, Thor: Love and Thunder boasts a rock n’ roll soundtrack, with Guns N’ Roses taking center stage, belting out tracks such as “November Rain”, “Sweet Child O’ Mine”, and “Welcome to the Jungle”, while Thor and Mighty Thor (Natalie Portman) unleash the fury of gods against their foes. The soundtrack compliments the movie’s dazzling visuals too, making the whole thing feel like one big ’80s melting pot.

However, director Taika Waititi was actually hoping the soundtrack would stick in the same way Kate Bush’s iconic ’80s hit “Running Up That Hill (A Deal With God)” did in this year’s fourth season of Stranger Things (2016), which, as a result, has enjoyed a worldwide resurgence. In fact, the director wanted to use the ’80s classic in Thor: Love and Thunder, but it has already become synonymous with the hit Netflix show.

While Thor: Love and Thunder has a scene with some truly awful CGI (three words: floating child’s head) the film has plenty of eye candy for viewers, as most of the time it looks like a rainbow has exploded onto the screen. The film is so beautiful that you could probably just sit there and watch it without the volume or even the subtitles (which you might actually prefer to do if you aren’t a fan, or if you happen to hate Guns N’ Roses).

But it’s not all rainbow colors, as the third act includes a sequence that’s mostly black and white, as Thor, Mighty Thor, Valkyrie (Tessa Thompson), and Korg (Taika Waititi) arrive at a dark region of the cosmos where they come face to face with Gorr the God Butcher, who manages to seize Thor’s axe Stormbreaker so that he can destroy all the gods in the universe. Somehow, despite having almost no color, the whole thing is just as visually striking as the rest of the film.

Christian Bale delivers a chilling performance as a man who acquires the power of a god in order to destroy them all. Some scenes featuring Gorr were so creepy they had to be omitted from the film, although the final product still has plenty of creepy scenes, as Bale’s antagonist is the stuff of nightmares (at least by MCU villain standards), especially when he’s terrorizing all the children of New Asgard as they float through the dark of the cosmos.

Gorr is easily one of the more sympathetic villains in the Marvel Cinematic Universe, as his motivation is something that makes him mostly human, a stark contrast against the many petulant gods that populate Thor: Love and Thunder, most of whom are without even a shred of humanity. But what’s great about Gorr is that he’s so much more complex and sympathetic than your average villain.

While there’s plenty of chemistry between Chris Hemsworth and Natalie Portman, or Thor and Jane Foster, in the original Thor (2011) and its sequel Thor: The Dark World (2013), it’s dialled all the way up to 11 in Thor: Love and Thunder. This could largely be because they were separated for years after their break-up, and it probably helps that Jane Foster has become Mighty Thor, something Thor can undoubtedly find common ground with.

The film spends a fair bit of time on the pair too, as they rekindle their romance, all the while they head to take on Gorr the God Butcher. However, their romance is sadly short-lived when Thor learns that Jane has been diagnosed with Stage 4 Cancer. While many Marvel fans understandably take issue with the films’ inconsistent tone, Jane’s death is handled rather beautifully, as is her arrival in Valhalla where she meets Heimdall (Idris Elba).

What’s not to love about both Jane Foster and her superhero alias Mighty Thor? After seeing her appear in the first trailer, fans were worried that she would eventually replace Chris Hemsworth as Thor, but this is anything but the case. And though her story is finite, she’s easily one of the best female superheroes in the MCU. She also has a compelling and tragic story arc, which makes her role in the film memorable for all the right reasons.

When Portman is in her Asgardian armor, she looks completely natural (though there is one scene in which her face-mask appears using digital effects that looks pretty awkward and artificial). Natalie Portman underwent a gruelling training routine to bulk up for the role, while VFX were used to make her appear taller while in the armor. But whether natural or artificial, Portman looks mighty fine as the Mighty Thor!

Though director Taika Waititi initially stated that he would not direct any more Thor movies following the backlash for Thor: Love and Thunder, he recently pitched an idea for Thor 5, which would involve a much smaller budget. Chris Hemsworth has also stated that he will continue to do Thor movies so long as Waititi is at the helm.

Do you like Thor: Love and Thunder? Let us know in the comments down below!

Comments Off on 7 Great Things About the Widely Hated ‘Thor: Love and Thunder’