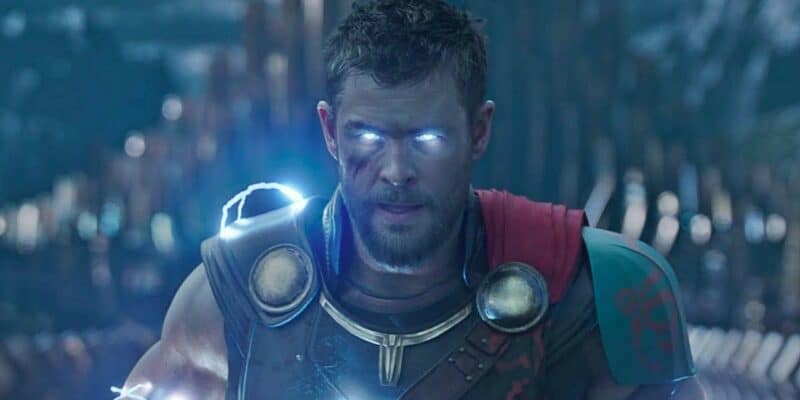 The Thor franchise follows Thor Odinson on his journeys from Asgard to many other realms, befriending, battling, loving, and losing — alongside a whole host of colorful characters. Thor’s travels take him from Midgard (AKA Earth), Jotunheim, Sakaar, and eventually, across the galaxy on a space-Viking ship pulled by screaming goats.

These movies definitely run the gamut — from critically acclaimed to critically panned (for MCU standards) — so let’s take a dive into each of the four current Thor offerings, see where they rank in relation to each other and look at all four Thor movies ranked from worst to best.

The often-cited weakest of the Thor films lands in fourth place — but its biggest crime? Just being a bit boring.

Helmed by Game of Thrones’ Alan Taylor, Thor: The Dark World is not horrendous by any means, but it’s maybe trying too hard to live up to the high fantasy, Shakespearean grandeur of its predecessor, without really going anywhere or doing anything interesting. Being passed around creatively behind the scenes left the film feeling like a passionless and bereft attempt at a Lord of the Rings reboot.

Hemsworth is not given a lot of room to play with the character of Thor — and we know he can deliver something more intriguing after his more recent MCU takes on the hammer-wielding hero. Dark World doesn’t provide him much chance to begin forging an identity beyond a one-note, almost monosyllabic portrayal, which stands in sharp contrast to the deviously funny Loki (as usual), played by Hiddleston. Portman is given arguably even less to work with Dr. Jane Foster, and it’s a right shame.

Taylor plays it too safe, and without Thrones’ more risque and dramatic elements, Thor: The Dark World feels like a forgettable, paint-by-numbers attempt at a Marvel movie. Without perhaps the longer-form breathing space afforded by the medium of television, The Dark World feels like grand exposition moving into more exposition until it finally begins getting into the action and humor.

All in all, it’s absolutely still watchable and enjoyable in its own right. Not a particularly joyous Thor outing, but a hard “okay” nonetheless.

… And we’re only at number four!

As fun as it is, Taika Waititi’s second Thor outing, the most recent box office hit, Thor: Love and Thunder, is objectively… maybe not the best movie, strictly speaking. At least it’s fun, though?

This is the first time we’ve seen Hemsworth’s Thor after the epic saga of Avengers: Infinity War (2018) and Avengers: Endgame (2019), and we meet the eponymous God of Thunder feeling a little melancholy after the (many) losses he’s suffered over the years — the deaths of his mother, Frigga (Rene Russo), father Odin (Anthony Hopkins), and brother Loki.

Last we left Thor, he had set off with the Guardians of the Galaxy, namely Peter Quill/Star-Lord (Chris Pratt), Mantis (Pom Klementieff), Rocket Raccoon (Bradley Cooper), Groot (Vin Diesel), Nebula (Karen Gillan), Drax the Destroyer (Dave Bautista), and Kraglin Obfonteri (Sean Gunn) — eventually (and quite quickly) coming out of pseudo-retirement to deal with the looming threat of Gorr the God Butcher (Christian Bale).

Thor: Love and Thunder has a star-studded cast for sure, with Portman finally returning as Jane Foster and now, the Mighty Thor, Thompson returning as newly-crowned King Valkyrie of New Asgard, plus newcomers Russell Crowe (Zeus) and Bale joining the Marvel Cinematic Universe — and for the most part they are given chances to shine — though ultimately they remain underutilized, with not enough screen time in the short runtime to really show off the most of their characters and performances.

This movie serves as prime real estate for Waititi’s brand of unhinged, chaotic humor — which lands if you enjoy it and perhaps doesn’t as much for those who don’t. Set to thundering Guns N’ Roses music, the film sits along the same vein as Thor: Ragnarok, though ultimately failing to recapture its classic “hero’s journey” vibe and even emotional beats.

Reportedly, Waititi directed an almost four-hour-long movie — which was cut down to two hours to honor Marvel Studio’s strict runtime requirements. It definitely feels as if Love and Thunder suffers from problems with cohesion in its storytelling and pacing, characters blowing past seemingly important scenes and pivotal moments to jump straight into the (probably expensive) CGI action. Considering Waititi’s recent less-than-positive comments regarding Love and Thunder‘s CGI, and the subsequent backlash calling for Marvel staff to unionize — perhaps we get the idea that the director himself is unhappy with the state of the movie.

With so much that got cut out just to cram into the two-hour runtime, the movie definitely feels rushed, and audiences are left with only the spark notes of a much deeper, likely better thought-out movie that gives time for its performers and humor to breathe in the in-between spaces.

Coming in at second place is the one that started it all — Thor (2011), directed by known Shakespearean actor and director Sir Kenneth Branagh. This early Marvel Cinematic Universe movie marks audiences’ first encounter with the titular Thor Odinson, as the cocky and brash, young (in Asgardian years, at least) God of Thunder, first in line to the throne of Asgard, and set to be their next King.

Hemsworth portrays Thor as an almost dictionary definition of “lovable himbo”, with his defiance of his father and King for glory and honor, while Hiddleston shines opposite as Loki, where he’s able to show off the character’s inherent charisma alongside his sharp wit and manipulative cunning.

Branagh’s thespian roots shine through with his clear understanding of how to tell an epic — the hubris of Thor Odinson in a classic tale of family drama, gods, trickery, and backstabbing. Each realm and ensuing plot thread is also defined, the arrogance leading to Thor’s daddy-defying actions and Loki’s betrayal and double cross — even Portman’s Jane Foster has motivations that are established quite clearly.

Thor balances the introduction to multiple realms with a significant deal of panache and distinction, along with a fair amount of humor and good action — introducing audiences to the warm, golden sunniness and traditional grandeur of Asgard, the frosty dark-and-blue cold of frost giant-run Jotunheim, all alongside Earth’s (Midgard’s) greyish human normalcy. The high fantasy, almost mythological approach remained quite separate from the more scientific or “realistic” bent that Marvel Studios (until that point) had taken with their other MCU offerings, like with 2008’s Iron Man.

It’s also important to remember just how much Thor defined the aesthetic of the realm and planet of Asgard and beyond for the entire Marvel Cinematic Universe, its Bifrost, AKA the “rainbow bridge,” and even the existence of other alien realms connected to it and Earth — perhaps acting as an early primer for Marvel fans, to better absorb the complex world-hopping of Phase Four’s Multiverse plotline.

I don’t really know what else there is to say about this movie because it stands as one of the most highly rated, and seemingly “perfect” MCU offerings to date, according to many Marvel fans.

The exceptionally well-paced film is the turning point in Thor Odinson’s story, which takes a distinct sci-fi bent after the high fantasy aesthetic of Thor and Thor: The Dark World. Embracing a new vibe, chopping off Thor’s flowing locks, and setting the character almost back to zero really lets the grand finale feel earned — and the subsequent loss of his home planet Asgard and of his brother Loki (Avengers spoilers, I guess?) at the hands of Thanos (Josh Brolin) hit even harder.

Jeff Goldblum’s Grandmaster is riotously fun, with classic, quirky Goldblum-isms playing awkward-funny off of Topaz (Rachel House), while Marvel fans are introduced to Thompson’s Valkyrie as Scrapper 142 — whose backstory expertly ties the greater alien-rife galaxy with the traditional, Norse-fantasy aesthetic of Asgard.

Korg (Taika Waititi) and Miek (Samuel Vincent) are also hilarious, welcome additions to MCU canon, with their B-plot where the gladiators stage a revolution on Sakaar adding to the world of the film without bloating it. Mark Ruffalo’s Banner also has ample time to shine and has his fair share of character progression before the world-changing events of Avengers: Infinity War.

Hela (Cate Blanchett) is a competent villain, though previously unheard of within the Marvel Cinematic Universe. She plays Hela in an almost hammy, Disney villain, Maleficent-like way, but with just enough real intimidation in her eyes, with her undead Asgardian army, feral zombie-wolf creature Fenrir and Mjolnir-shattering powers posing a real threat to the movie’s heroes.

Hemsworth is definitely able to play with Thor’s character here, and with Hiddleston acting as his classic foil, the brotherly parts feel perhaps the funniest and subsequently most emotional — no one can forget expertly improvised bits like, “when we were children, he transformed himself into a snake!” or the much-memed “get help” scene. 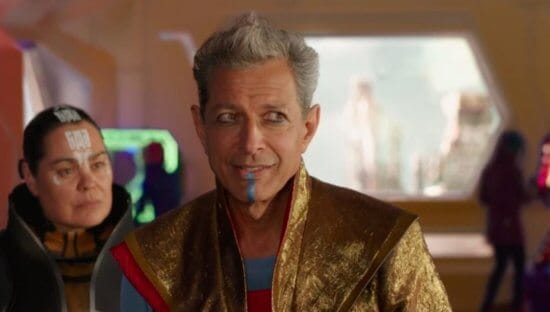 Thor: Ragnarok remains a triumph, with humor that hits in all the right ways, plot and character progression that doesn’t feel forced, and a timely rejuvenation of a more… staid (and stale) Thor formula.

Ultimately, the Thor series of films do not disappoint — intergalactic space travel, crammed full of wacky humor, Norse-god-tier action, and filled with some truly poignant emotional beats. Audiences are in for a treat, no matter when you choose to watch these films.

For the Marvel Cinematic Universe, maybe lightning does strike more than once.

What do you think of the Thor films? Do you agree with this ranking? Share your thoughts in the comments below!

The Marvel Cinematic Universe’s dramatic ending to Phase Three, ‘Avengers: Endgame’ directed by Anthony and Joe Russo, led to the beginning of Phase Four with the Disney+ Original WandaVision, starring Elizabeth Olsen (Scarlet Witch) and Paul Bettany (Vision) back in 2021.

Marvel went full steam ahead with Phase Four, releasing ‘Shang-Chi and the Legend of the Ten Rings’ (2021) starring Simu Liu (Shang-Chi), ‘Spider-Man: No Way Home’ (2021) with Tom Holland, Andrew Garfield, and Tobey Maguire all as their own separate, Multiversal version of Peter Parker, ‘Doctor Strange in the Multiverse of Madness’ (2022) with Benedict Cumberbatch (Doctor Strange) and most recently, ‘Thor: Love and Thunder’ (2022) with Chris Hemsworth (Thor Odinson) and Natalie Portman (Jane Foster).

Other MCU Phase Four films on the horizon are Black Panther: Wakanda Forever, premiering November 11, 2022, Ant-Man and the Wasp: Quantumania on February 17, 2023, Guardians of the Galaxy Vol. 3 on May 5, 2023, and Captain Marvel sequel, The Marvels on July 28, 2022. The Disney+ streaming service also offers MCU Phase Four TV shows such as critically acclaimed Ms. Marvel (2022) and Moon Knight (2022), and other future projects such as Iron Man-related Ironheart.