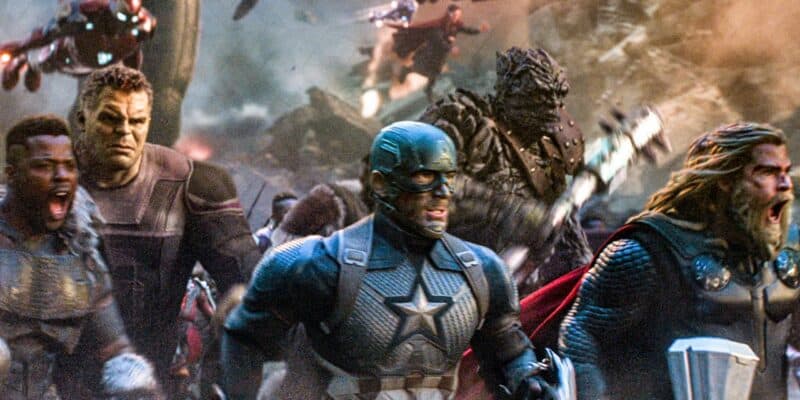 The next phase in the Marvel Cinematic Universe (MCU) has often been discussed and hypothesized by Marvel fans and general enthusiasts alike — but with MCU’s Phase Four, well, phasing out, and beginning the entrance to its “twilight years” at this point — it’s about time that Marvel starts considering their next steps, moving into Phase Five and Phase Six.

The Marvel Cinematic Universe is more than halfway through its slate of Phase Four films — and even though technically, the jury’s still out on Phase Five and Six’s exact subject matter — it’s almost confirmed at this point via current Marvel Studios President Kevin Feige’s heavy hinting, that the next step forward will adapt the events of Marvel Comics’ “Secret Wars”, and finally bring those storylines to the big screen.

So what exactly are these “Secret Wars”?

“Secret Wars” in the Marvel Comics

It’s no secret that the Marvel Cinematic Universe storylines are heavily based on and adapted from the pre-existing Marvel Comics characters and narratives.

The “Secret Wars” in Marvel Comics was the first-ever crossover event in Marvel history that revitalized and revised a large majority of Marvel canon. It began as a 12-issue comic book limited miniseries in 1984-1985 — that was soft-revived in 2015 as a comic book storyline with the same name.

What was Marvel’s “Secret Wars” about?

The original “Secret Wars” series initiated by Marvel Comics editor-in-chief Jim Shooter in the ’80s concerned an omniscient cosmic entity known as the Beyonder who observed the Multiversal heroes and villains, and eventually transported them to an alternate warzone-esque world known as the Battleworld — made out of a mish-mash of parts of Earth and other planets in the galaxy.

The Beyonder brought together famous (and infamous) Marvel superheroes and their adversaries onto this world, such as the Avengers, the Fantastic Four, the X-Men, and Spider-Man, including antagonists Doctor Octopus, Kang the Conqueror and — importantly to this story — Molecule Man and Doctor Doom.

Amidst the Beyonder testing the super-powered individuals’ mettle and morals, Doctor Doom plots on his own to take over the Beyonder’s power by utilizing Molecule Man’s reality-altering powers and unique ability to act as a Multiversal “key”. Ultimately, Molecule Man turns on Doctor Doom and the heroes overcome their opponents, saving the day (and their respective universes) — albeit with a few lasting changes — such as Spider-Man bonding temporarily with the Venom symbiote, leading to the introduction of his iconic black Spider-suit.

This is only in the original “Secret Wars” story ’80s though — the concept was revived in 2015 on the 30th anniversary of the original series, this time with Marvel making an extremely bold move and destroying its then-canon continuity and universes, to build it back up again post-crossover.

2015’s iteration of “Secret Wars” began with existing heroes encountering a Multiversal threat in their individual stories (sound familiar?) — where the Avengers, New Avengers, and Fantastic Four had to contend with multiple universes colliding and destroying each other.

The main Marvel Universe 616 and the Ultimate Universe 1610, collided in an Incursion to form another Battleworld, just like in 1985 — except this time, the Beyonder was not a single individual but a race of extra-dimensional beings known as the Beyonders, who desired to experiment and restart reality for their own purposes. Key to this was once again, Molecule Man — who existed in the exact same way in every universe — acting as a power “battery” so Doctor Doom could ultimately overthrow the Beyonders and establish his own version of the Multiverse.

This Doom-Battleworld rewrote every existing Marvel hero and villain’s story, with Marvel Comics actually canceling all runs of existing series and only putting out “Secret Wars” comics for the period of the run.

Who was involved in “Secret Wars”?

Nearly all Marvel heroes and villains were involved — everyone ranging from Doctor Strange to Groot, Iron Man to X-Men’s Beast, Captain America, the Punisher, Captain Marvel, even Magneto, and beyond — all striving to right Multiversal wrongs.

However, most important to the story (particularly the 2015 version), was Mister Fantastic (Reed Richards) of the Fantastic Four and his Multiversal counterpart the Maker, who teamed up with Spider-Men Peter Parker and Miles Morales to infiltrate the God Emperor Doom’s Castle. Alongside the other heroes who managed to escape being rewritten by Doom, the side of good managed to triumph, returning the Marvel universe(s) to relative normalcy.

What can we expect from “Secret Wars” in the MCU?

So how will all of this play into the current Marvel Cinematic Universe, with the onset of Phase Five and the (as of now) established Multiversal threats that existing heroes have already had to face?

In accordance with the Kevin Feige tease, there already exist many hints within the current slate of Marvel Cinematic Universe projects, within both films and TV shows alike — including the not-to-be-overlooked established Phase Four timeline of films, and their host of billed villains.

The threat of Multiversal Incursions has already been established in 2022’s Doctor Strange in the Multiverse of Madness starring Benedict Cumberbatch as Doctor Strange, Benedict Wong as Sorcerer Supreme Wong, and newcomer Xochitl Gomez as America Chavez — with the post-credit scene featuring a Darkhold-altered Doctor Strange running off with Charlize Theron’s Clea to stop an Incursion that he presumably started.

On top of all of this, the theory that Feige could have a way to destroy Sony’s movie universe (Sony’s Spider-Man Universe) using the threat of Incursions, looms constantly — the permanent deletion of Morbius’ world (and any character there) from existence entirely at Feige’s whim and fancy.

All of this evidence proves the overwhelming point that “Secret Wars” will likely be central to the MCU’s Phase Five and Six — the big question now though, is who exactly lies at the center of all of this?

Who will be the villain in “Secret Wars”?

Where the Marvel Cinematic Universe is headed (and its success) largely relies on the strength of the Phase’s main villains and how much of an “Avengers-Level Threat” they pose to the MCU status quo. Thanos (Josh Brolin) and his quest to fill the Infinity Gauntlet with the Infinity Stones being central to the uniting of Earth’s Mightiest Heroes — Tony Stark’s Iron Man (Robert Downey Jr.), Steve Rogers’ Captain America (Chris Evans), Bruce Banner’s Incredible Hulk (Mark Ruffalo), and Thor Odinson (Chris Hemsworth), plus their other super-powered contemporaries — during Russo brothers-helmed Avengers: Infinity War (2018) and Avengers: Endgame (2019), was absolutely key to the successful conclusion of Marvel’s Phase One, Two, and Three.

We already know that Ant-Man and the Wasp: Quantumania (2023) will feature an iteration of Kang the Conqueror (Jonathan Majors) who we first met in 2021’s Loki Disney+ Original TV series, starring Tom Hiddleston as the titular Loki. Kang is the villain sitting outside of Time, who established the Time Variance Authority (TVA) — a threat to the MCU because of his ability to traverse time and utilize multiple versions of himself across universes to gain power and control.

Kang could play a vital role in MCU’s version of “Secret Wars” — perhaps even in place of the Beyonder from the Marvel Comics.

With the prominence of Reed Richards in 2015’s “Secret Wars” however, we can likely expect John Krasinski’s Mister Fantastic to play a pivotal role in the Multiversal goings-on of MCU’s Phase Five or Six — and naturally, as would his adversary Doctor Doom, already a canon “Big Bad” in both Marvel Comics’ ‘”Secret Wars” stories.

There are already evidenced theories going around about the involvement of Doctor Doom as the main villain of the Phase Six Fantastic Four movie, alongside Howard Stern letting slip that a Doctor Doom role might lie in his future — so it isn’t a stretch by any means to assume that this brand new Marvel villain could pose a serious threat to the heroes of the current Marvel Cinematic Universe.

In addition to this, Doctor Doom recently showed up in the new “Strange” comic run which sees Clea — who, of course, also just appeared in the live-action Marvel Universe — take over as Sorcerer Supreme after the death of Doctor Strange. These could be pivotal moments that may transcend genre and become reality on screen.

How things will truly play out, however, will only be revealed in time. Despite being so much closer to the end of Phase Four, the developments in the upcoming Marvel Cinematic Universe films, Black Panther: Wakanda Forever premiering November 11, 2022, Ant-Man and the Wasp: Quantumania on February 17, 2023, and Guardians of the Galaxy Vol. 3 on May 5, 2023 — will only lay the foundation for even bigger “Secret Wars” to come.

What do you think will happen in this new Phase of the Marvel Cinematic Universe? Are you excited about Phase Five and Phase Six? Share your thoughts in the comments below!

The Marvel Cinematic Universe’s dramatic ending to Phase Three, ‘Avengers: Endgame’ directed by Anthony and Joe Russo, led to the beginning of Phase Four with the Disney+ Original WandaVision, starring Elizabeth Olsen (Scarlet Witch) and Paul Bettany (Vision) back in 2021.

Marvel went full steam ahead with Phase Four, releasing ‘Shang-Chi and the Legend of the Ten Rings’ (2021) starring Simu Liu (Shang-Chi), ‘Spider-Man: No Way Home’ (2021) with Tom Holland, Andrew Garfield, and Tobey Maguire all as their own separate, Multiversal version of Peter Parker, ‘Doctor Strange in the Multiverse of Madness’ (2022) with Benedict Cumberbatch (Doctor Strange) and most recently, ‘Thor: Love and Thunder’ (2022) with Chris Hemsworth (Thor Odinson) and Natalie Portman (Jane Foster).

The newly announced MCU Phase Five kicks off with Ant-Man and The Wasp: Quantumania with Scott Lang as Ant-Man (Paul Rudd) and Janet van Dyne as the Wasp (Evangeline Lilly) hitting theatres on February 17, 2023, before May 5, 2023 brings us the final James Gunn-directed Guardians of the Galaxy: Vol. 3 with Peter Quill AKA Star-Lord (Chris Pratt), and July 28, 2023 takes us to new cosmic heights with The Marvels, a direct sequel to Captain Marvel (2019) starring Brie Larson as Carol Danvers and newcomer Iman Vellani (Ms. Marvel).

We can expect the Disney+ Original Ironheart featuring Riri Williams (Dominique Thorne) Fall 2023, as well as the brand new Blade film in November, with 2023 ending in Agatha: Coven of Chaos and 2024 starting with Daredevil: Born Again – the latter two both Disney+ exclusives.

Phase Six will surely break new records with Fantastic Four in November 8, 2024, and likely the biggest announcements to date – a return to an “Avengers-level threat” with the Multiverse Saga’s conclusion in May 2025’s Avengers: The Kang Dynasty and November’s Avengers: Secret Wars.