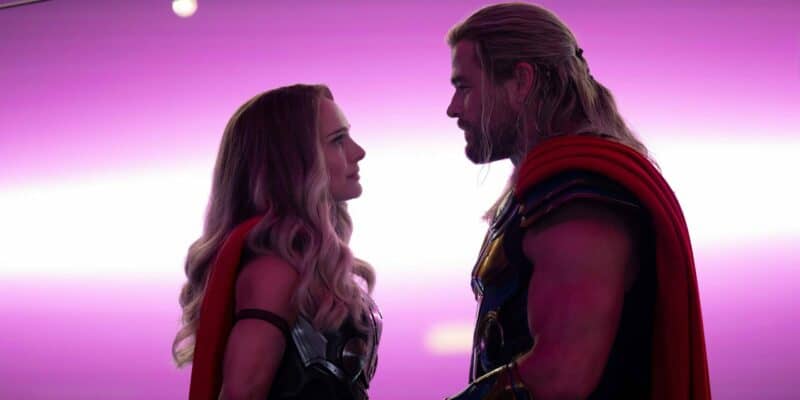 Recently, the online rumor mill has been working overtime perpetuating the story that Chris Hemsworth will no longer play his Marvel Cinematic Universe role, Thor, after the release of his fourth solo outing, Thor: Love and Thunder on July 8, 2022.

The film, directed by Taika Waititi (JoJo Rabbit, Boy, Free Guy), has received praise from critics — who say it has more of an emotional, “rom com” vibe than they were expecting — after early screenings. Love and Thunder will see the returns of numerous fan favorites from prior Thor movies, including Hemsworth, Natalie Portman (Jane Foster/Mighty Thor), and Tessa Thompson (Valkyrie).

While the star-studded cast almost feels like a finale, of sorts, Hemsworth has now shut down the rumors that he won’t return as the Asgardian god, insisting that he will return as Thor until “someone kicks me off the stage.”

The actor spoke to Extra on the red carpet, saying:

“I love it, I love it. I’ll come back for more and more until someone kicks me off the stage, you know. I love it. My whole career has been based around me playing this character and to come back again and again and play it with different directors and different casts has been an absolute joy. And, yeah, we’ll see what the fans want, and I don’t know, I’m down for whatever is enjoyable and having a good time. That’s what this experience in the Marvel world has been for me, so bring it on.”

Marvel Studios President Kevin Feige has also said he is open to bringing the Thor cast back for additional projects in the future.

There are also some reports that he may make a cameo appearance alongside Tom Hiddleston in Loki Season 2 on Disney+.

Do you hope Chris Hemsworth stays in the MCU?

Comments Off on Chris Hemsworth Lays Rumors to Rest, Will Play Thor Until He’s “Kicked Off the Stage”