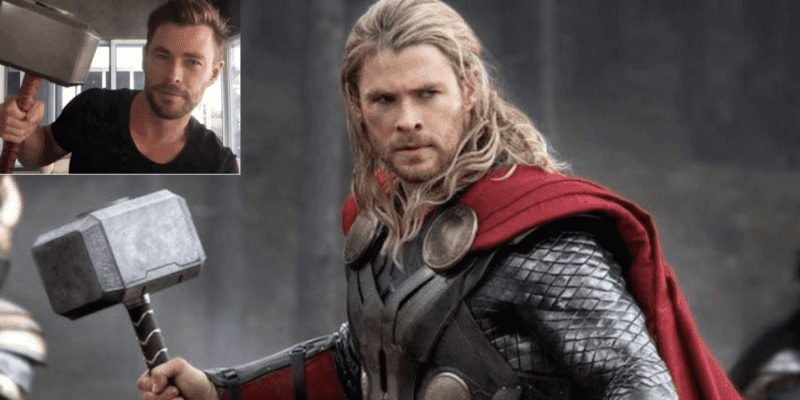 Chris Hemsworth, who plays the God of Thunder in Marvel’s Thor films and the Avengers series, recently appeared on Jimmy Kimmel (remotely to adhere to social distancing, of course) to discuss his upcoming international crime thriller, Extraction.

Conversation inevitably turned to his portrayal of Thor. Hemsworth mentioned to Kimmel that he actually took the original Mjolnir and Stormbreaker props at the Australia home he shares with wife, Elsa Pataky, and their three kids.

When Kimmel teased the Hemsworth interview, he shared a photo of the Marvel actor wielding Mjolnir in his living room.

The God of Thunder joins us from his home down under! @ChrisHemsworth pic.twitter.com/94KMxUdFHb

MCU fans know that Mjolnir is the legendary hammer belonging to the God of Thunder in Norse mythology. Stormbreaker, on the other hand, is the hammer-axe created by Kevin Feige and the Marvel team. In the Marvel Cinematic Universe, this enchanted Thor weapon was crafted of the nearly indestructible material, Uru.

In an interview last year, Pataky put a fatwa on her husband’s budding Thor hammer collection. She said, “Yes, he always picks the best places in the house. We have five of them for every movie he’s done. Like, seriously, no.”

Despite Pataky’s consternation, we’re sure she’s excited to have Hemsworth home more right now. After Avengers: Endgame released last year, Hemsworth vowed to take some time off to spend with his wife and kids. Now, thanks to quarantine, he’s getting even more unexpected quality time at home.

In 2019, the Thor actor was quoted saying, “They [his children] are at a very important age. They are still young and they are aware when I leave more than before. I have this year where I’m probably not going to shoot anything. I have a press tour, a few endorsements and bits and pieces, but mostly just be home.

“If you went back 10 years and asked me what would be my dream scenario, this is kind of it. I can now sit back, enjoy and appreciate it, and stop chasing [movies].”

We love that Hemsworth is devoting time to what really matters right now! What do you think of his super fun Thor prop collection? Tell us in the comments!

What’s coming up for Chris Hemsworth?

Although Hemsworth is taking a breather right now, he will be picking up Thor’s hammer again soon enough. Thor: Love and Thunder, which is set to feature cameos from Star-Lord and other members of the Guardians of the Galaxy cast, is slated to release in 2022.

The Avenger will also be appearing as Terry Boella/Hulk Hogan in a recently announced biopic about the wrestling legend.