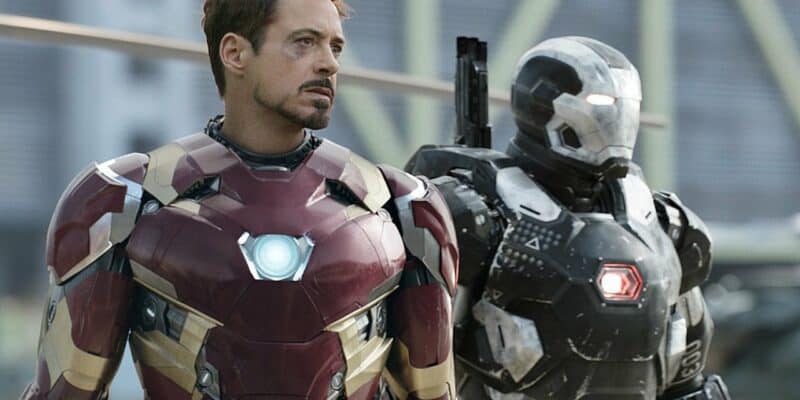 New leaked images from the Secret Invasion set confirms that Don Cheadle’s War Machine will be appearing. Most likely, Cheadle will portray Tony Stark/Iron Man’s (Robert Downey, Jr.) sidekick James “Rhodey” Rhodes, but he could be an imposter due to the reemergence of the Skrulls.

The show will star Samuel L. Jackson and Ben Mendelson as Talos as the show will focus on Fury preventing the Skrulls from taking over the world. This won’t be an easy task since Skrulls are shapeshifters and can disguise themselves to look like whoever they want. Marvel did introduce the aliens as refugees from the Kree Empire in Brie Larson’s Captain Marvel (2019) which caused some controversy since the aliens are always considered to be villains in the comics.

Now, Marvel is making the Skrulls the villains for Secret Invasion as they were a dangerous comic book threat to the Avengers and other super heroes. Due to their shapeshifting abilities, the Skrulls are not easy enemies to defeat. They may not be strong or have powerful weapons, but their ability to look like anyone they want to has caused tremendous problems for the Marvel universe. With the Skrulls, it’s hard to know who you can trust when anyone can be one of them.

Secret Invasion has been filming primarily in the U.K. Fans want to learn new details about the upcoming series and a few people have posted some pictures of what they have seen on the sets so far.

Fans have spotted Skrulls, a poster for “Rogers: The Musical”, Emilia Clarke, and Cobie Smulders returning as Maria Hill. The picture of “Rogers: The Musical” was spotted at the Liverpool Street Station set in Central London and another fan, @the_insta_phils found a newspaper with Rhodey on the cover.

Came across two lots of filming while out in London today, the first near Bank Underground looked like the fallout from some sort of apocalyptic event including smashed up vehicles and seemingly dead alien while at Liverpool Street Station they were definitely filming for the Marvel Disney+ series Secret Invasion (the Rogers the Musical poster and prop newspaper showing Don Cheadle’s James ‘Rhodey’ Rhodes on the front page were a couple of clues, and a quick google confirmed that it’s filming under the name Jambalaya which I spotted on the clapperboard)

The newspaper headline reads, “President Ritson in London for Emergency Talks” which may be the first indication of how dangerous the situation is with the Skrull invasion. Sources believe President Ritson is the MCU’s president of the United States which would make sense why Rhodey would speak to him.

The Marvel Cinematic Universe is interested in exploring how the world is struggling to adapt after the Blip. This was recently seen with Falcon and the Winter Soldier, and WandaVision. If the MCU’s United States is in emergency talks, then that could mean that the Skrull invasion may be worse than fans originally thought. Marvel doesn’t normally bring politics into the MCU, but Secret Invasion appears to be changing this.

What’s the big deal about Rhodey then?

Rhodey made an appearance in Falcon and the Winter Soldier when he talked to Anthony Mackie’s Sam Wilson/Falcon about Captain America’s shield. Throughout the MCU, Rhodey is seen as the superhero who is willing to work with the government. He signed the Sokovia Accords in Captain America: Civil War (2016) and helped Secretary Ross at the beginning of Avengers: Infinity War (2018). Now, it seems that he may be continuing this role as a mediator between superheroes and the world governments.

It’s unclear if the world is already under attack by the Skrulls or what exactly caused the United States to be in “emergency talks” but it isn’t good. Rhodey’s role in Secret Invasion could simply be setting up his character for Armor Wars. There is also the possibility that Rhodey could just be an easter egg in this newspaper. It would make sense if Secret Invasion focuses on how the world is struggling to face an unknown enemy, that War Machine would try to help and ease tensions between other countries. His role in the Marvel Cinematic Universe has always been more as a diplomat than a warrior so it would make sense for the character.

Secret Invasion is still currently filming with no set release date, but there’s a good possibility the show will debut on Disney+ in 2023.

Do you think Rhodey will have a role in Secret Invasion? Do you think it will just be a cameo? Let us know what you think in the comments section below!