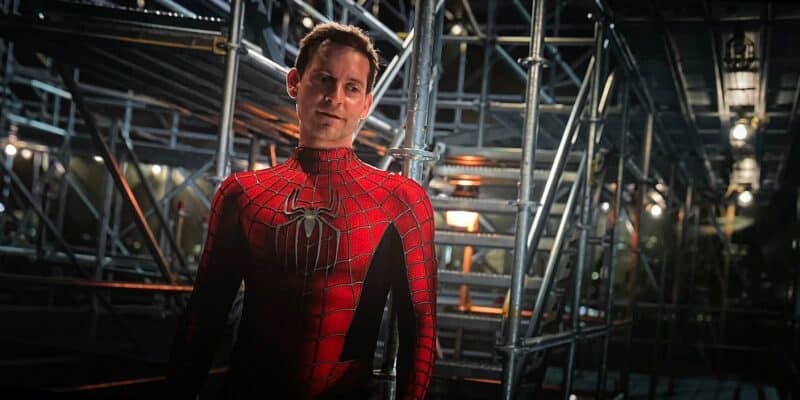 Tobey Maguire shared his experience with his new Spidey suit.

The fan-favorite Marvel actor returned alongside Andrew Garfield to play Spider-Man again. Ever since his first movie with Sam Raimi, Spider-Man (2002), fans have loved Maguire’s iteration of Spider-Man. When Maguire reprised his role for Tom Holland’s Spider-Man No Way Home (2021), fans lost their minds seeing the three Spider-Men working together.

Now, Sony is releasing the digital version of the movie on March 22 and has shown some behind-the-scenes moments between the actors. One of those moments was recently posted online with all three Spider-Men discussing how it felt to be in the Spider-Man suit.

Here’s the Tweet if you haven’t seen it yet:

Suit up with Spider-Man – all three of them! 🕷 #SpiderManNoWayHome finally comes home on Digital March 22 and on 4K Ultra HD and Blu-ray on April 12! https://bit.ly/PreOrderNWH

Suit up with Spider-Man – all three of them! 🕷 #SpiderManNoWayHome finally comes home on Digital March 22 and on 4K Ultra HD and Blu-ray on April 12! https://t.co/kaMOLm7qbO pic.twitter.com/wODobW8YmM

Tobey Maguire has worn many different Spider-Man suits over the years so the actor shared about the challenges that a suit brings for the actor in a Marvel movie:

“The suit can definitely be a challenge at times when you gotta get in the full thing. But then, by getting comfortable in it, there is something funny, it just helps as an actor when you get in your costume, you begin to feel it more and embody it more. I’m still processing, it’s all happening still, I’m catching up.”

Since Tobey Maguire’s last appearance as Spider-Man was in Spider-Man 3 (2007), it has been a long time since the hero was the friendly neighborhood Spider-Man. The trio quickly pointed out that it didn’t take long for Maguire to get back into his role:

Holland: “This only just happened.”

It’s no secret that Maguire loved his time as Peter Parker/Spider-Man and it gave the actor a huge fan base. Playing Spider-Man has got to be one of the best experiences for the actor. Maguire couldn’t explain how he got comfortable with the suit so quickly as the other members of the trio noted that it wasn’t long before the actor was dancing on set:

Holland: “You started to feel pretty at home.”

Garfield: “You were dancing pretty quickly.”

Maguire: “I did, yeah. I have no explanation for it, it just did it.”

Fans were excited to see Maguire’s Spider-Man return to the big screen, but there’s a chance that the actor isn’t done playing Spider-Man. There are reports that Spider-Man will be in Doctor Strange in the Multiverse of Madness (2022) leaving fans to guess that Maguire will be the web-slinger to make an appearance. It only makes sense as Sam Raimi is directing the MCU film. Fans will have to wait and see, but there’s a good chance this isn’t the last time Maguire shows up in the Marvel Cinematic Universe.

Spider-Man needs all the help he can get as his wish for his life to go back to normal causes a spell to go wrong and has villains from other corners of the multiverse appear and they begin to terrorize Peter’s world. Yet, Spider-Man believes in second chances due to his Aunt May (Marisa Tomei) and tries to save villains such as Alfred Molina’s Doctor Octopus, Willem Dafoe’s Green Goblin, and Jamie Foxx’s Electro.

Spider-Man No Way Home‘s digital release is March 22 with the full home release on April 12.

Are you excited to possibly see more of Maguire in the MCU? Let us know what you think in the comments section below!

Comments Off on Tobey Maguire Feels “Comfortable” Being Spider-Man Again