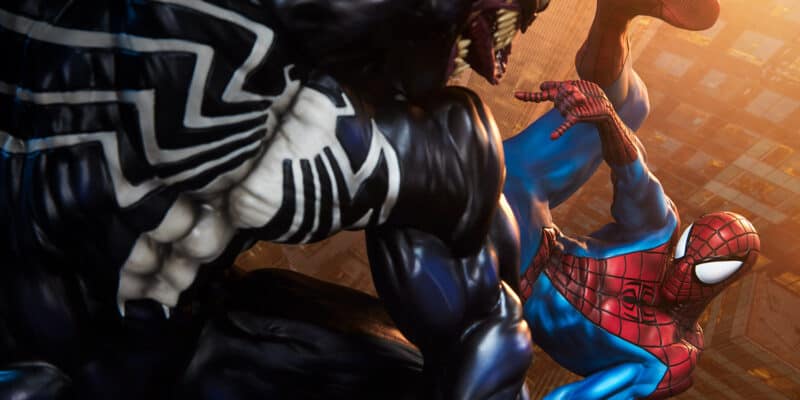 Last time we saw the two together was in Sam Raimi’s Spider-Man 3 (2007) as Tobey Maguire’s Spider-Man had to fight Sandman and Venom to save MJ (Kirsten Dunst) with the help of his best friend, Harry Osborn (James Franco) to take down the two villains. This iteration had Spider-Man find the symbiote from a crater and then when he realized how the alien symbiote was affecting him, Peter ripped it off and it attached to Topher Grace’s Eddie Brock leaving the reporter to become a monstrous alien.

Related: Marvel Deletes Mysterio Scene That Changes Everything in ‘Spider-Man: No Way Home‘

Sony decided to create their own Spider-Man universe focused on the villains and antiheroes that Spidey has faced and so Tom Hardy became the new Eddie Brock/Venom in Venom (2018). This solo film was very successful for Sony and let Venom get a sequel, Venom: Let There Be Carnage (2021),  and for a new spin-off focused on Morbius which will release on April 1, 2022.

Ruben Fleischer directed the first Venom film and then went on to direct Uncharted (2021), which also stars MCU Spider-Man franchise star, Tom Holland. During a recent interview, Fleischer was asked about what his thoughts are on a crossover between the two characters:

“We’ll have to see. I mean, it would be honestly a dream come true to have those two worlds converge. It’ll be a formidable battle between those two characters, so… whether or not I direct it, I’ll certainly be excited to see it.”

The Venom director doesn’t believe he will direct the third installment as Tom Hardy wanted Andy Serkis to direct the sequel and will most likely direct the third movie. Venom 2 had a crazy post-credit scene showing Venom getting taken to the MCU and seeing Tom Holland’s Spider-Man. One of the post-credits from No Way Home had Eddie Brock trying to rationalize what had happened in the MCU and was teleported back to his own world due to Doctor Strange fixing the spell, leaving a small piece of the symbiote behind. Fans speculate that the MCU and Sony will continue to do more crossovers as rumors have circulated that Spider-Man will appear in some of Sony’s spin-off movies like Morbius leaving people to wonder if Tom Holland will crossover or if Andrew Garfield’s Spider-Man or Tobey’s will take the role.

Related: Tom Holland’s Spider-Man Was Almost Missing Something Crucial In ‘No Way Home’

Then there is the question of whether or not, Tom Hardy’s Venom will be in the MCU as a part of the symbiote left itself in the MCU — this offers the chance for Hardy to stay with Sony Pictures exclusively and allow another actor to take the mantle for the MCU.

Hardy, for his part, has said he “would do anything” to bring his Venom to Kevin Feige’s Marvel Cinematic Universe.

It is hard to tell, but most likely Andrew Garfield’s Spider-Man will do a crossover with Venom in the Sony movies to avoid any confusion on whether or not the Sony films are part of the main timeline for the Marvel Cinematic Universe. After Morbius, it may be easier to understand what to expect from Sony on what their plans are for their beloved web-slinger in their projects as Tom Holland’s Spider-Man is already slated to have another trilogy dedicated to him.

Related: Marvel Admits They “Cut Back” Daredevil Scenes in ‘Spider-Man‘

Do you think Venom and Spider-Man will fight in a crossover? Let us know in the comments below.