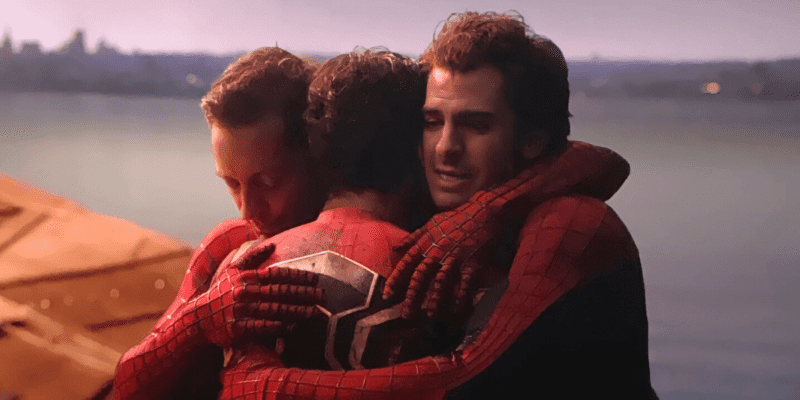 Spider-Man: No Way Home (2021) stars Tom Holland, Tobey Maguire, and Andrew Garfield finally appear alongside each other for their first interview together post the epic Multiverse Marvel movie moment.

First the first time EVER, “Spider-Men” stars Andrew Garfield, Tobey Maguire, and Tom Holland finally sit down with each other with Deadline Hollywood to talk about their emotional return to the Marvel Universe and introduction into the Marvel Cinematic Universe.

The dream of Marvel fan has come true, as Maguire, Holland, and Garfield sit down and share their Spider-Man feelings:

You can watch the entire 30-minute interview below:

In the video above, Tobey Maguire shares, “it was really about getting together with these people [Holland and Garfield] and revisiting what was my history and getting a chance to come together.”

What’s more, Tom Holland shared that he loves to go on social media and watch fan reactions to Tobey Maguire and Andrew Garfield’s epic entrances in the Marvel movie.

On top of that, Garfield revealed that he was initially waiting for Tobey Maguire to join the secret project before he committed to anything. Once Maguire was onboard, Garfield couldn’t deny:

Garfield continues his story about joining No Way Home:

“But that was sincerely a big part of it when I was approached about it, and again, it’s similar to what Tobey was saying. It was like, oh, the intention feels very pure here. It actually feels like a great creative idea and a great creative story. It wasn’t like they were just asking us to come and say hi and then leave again, but actually, have our presence being in service to Tom, being in service to Tom’s journey and where he is as Peter Parker, and I love the destiny feeling of the multiverse expanding in this film, and actually, without Tobey’s Peter and Andrew’s Peter being present for Tom’s Peter at this very moment, he may not become the Peter Parker that he’s supposed to become…Getting three Spider-Men together could go one of two ways, and I think it’s a testament to these guys that it went the way that it went, which was a brotherhood, which is just beautiful.”

In this emotional, overwhelming article with the three Spider-Men, fans can look forward to the charismatic charm of all three legendary Marvel actors.

The three seem to have become best friends on set, with Garfield calling the experience between them a “brotherhood.” It’s refreshing to hear Tobey Maguire talk Spider-Man after 14 years of his respectful silence.

Numerous reports suggest that Tobey Maguire and Andrew Garfield are returning to the Marvel Universe shortly, with The Amazing Spider-Man 3 and Avengers: Secret Wars reportedly being the showcases for these two Spider-Men.

Nonetheless, given that Tobey Maguire recently stated that he’s open to returning to this role with Sam Raimi directing is promising, with Andrew Garfield saying he’s up to swinging through Marvel’s New York once again when the timing is just right.

This is an updating piece. Stay tuned to Inside the Magic for more!