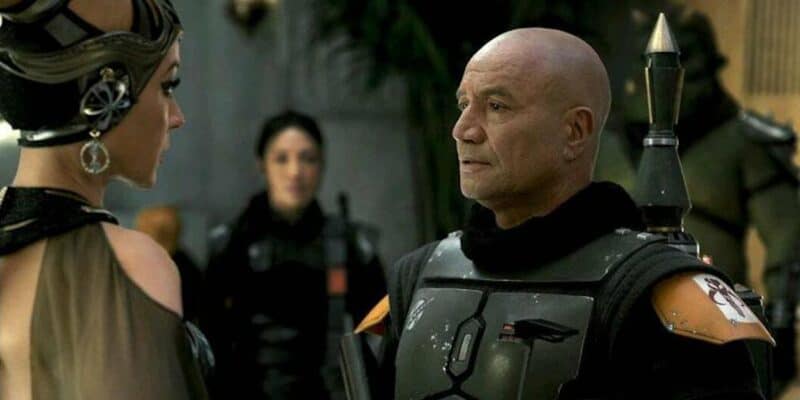 Over the course of the last 43 years, the Star Wars franchise has become a household name — who isn’t familiar with Han Solo (Harrison Ford), Princess Leia (Carrie Fisher), and Jedi Knight Luke Skywalker (Mark Hamill), even if they’ve never seen a single Star Wars movie? — and, since 2019, The Mandalorian has thrust the Star Wars story back into the pop culture spotlight.

One of the most noteworthy moments of The Mandalorian saga so far was the Season 2, Episode 6 (“Chapter 14: The Tragedy”) return of iconic bounty hunter Boba Fett (Temuera Morrison).

The legendary son of Jango Fett obviously survived his fall into the Great Pit of Carkoon and is now becoming a bigger part of the Star Wars universe than ever before.

Just weeks before Mandalorian spinoff, The Book of Boba Fett, debuts on Disney+ on December 29, 2021, Morrison has spoken out about some of what Star Wars fans can expect when the show finally drops. He said:

The fact that The Book of Boba Fett will fill plotholes shouldn’t come as a surprise to fans of The Mandalorian saga. Series creator Jon Favreau and executive producer Dave Filoni have been explaining Star Wars gaps since the beginning when they dove directly into clarifying Supreme Leader Snoke’s (Andy Serkis) origin arguably better than Star Wars: Episode IX – The Rise of Skywalker (2019) ever did.

Furthermore, Filoni’s latest animated series, Star Wars: The Bad Batch, set up numerous new details about Boba Fett’s past on Kamino — including the fact that he has a “sister” named Omega (Michelle Ang) and his original name was Alpha.

Given that Fett also has a long history in the Star Wars Expanded Universe/Star Wars Legends story, it is especially exciting for fans to be getting some solid answers about his past in the existing canon — perhaps we will clear up once and for all if the beskar-clad bounty hunter actually suffered from “Sarlacc cancer” that even a Bacta tank couldn’t cure.

“[I] can’t say anything about it at all right now, but it’s coming out in December… Wait until you see what’s coming. It’s going to blow your mind. That’s all I can say. I can talk it up all I want, because I know it over-delivers. It way over-delivers. People are going to be so pumped when they see it.”

When he reemerges on Tatooine at the end of December, fans are expecting cameos from a number of popular Star Wars characters, such as Emilia Clarke’s Qi’ra and Crimson Dawn from Solo: A Star Wars Story (2018), Pascal’s Djarin, Timothy Olyphant’s Marshal Cobb Vanth, and, of course, a young original trilogy-era Han Solo — CGI, of course — production executives have yet to confirm any details regarding special appearances by Star Wars fan-favorites.

“The Book of Boba Fett,” a thrilling Star Wars adventure teased in a surprise end-credit sequence following the Season 2 finale of “The Mandalorian,” finds legendary bounty hunter Boba Fett and mercenary Fennec Shand navigating the galaxy’s underworld when they return to the sands of Tatooine to stake their claim on the territory once ruled by Jabba the Hutt and his crime syndicate.

Are you excited to see what plotholes are filled in The Mandalorian‘s “next chapter”?