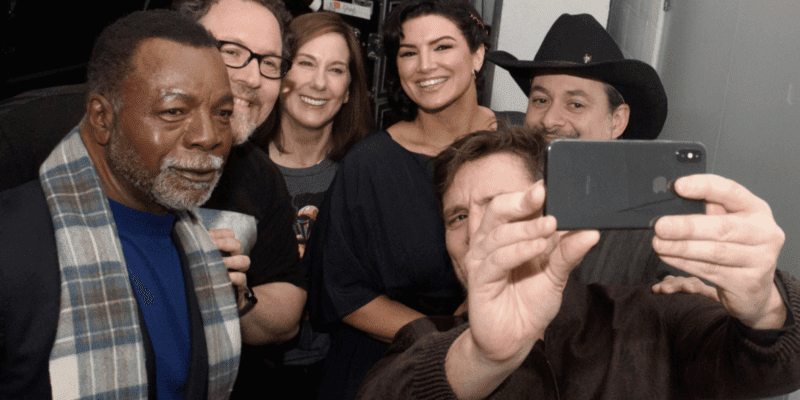 If you’re a Star Wars fan, you probably fall into one of two camps — team Kathleen Kennedy or team Jon Favreau and Dave Filoni.

All too often, the vitriol against Kennedy — whose contract as Lucasfilm President was recently renewed by The Walt Disney Company — and the Star Wars sequel trilogy manages to disregard the fact that she and her team also greenlit Favreau and Filoni’s The Mandalorian, which many fans have deemed the saving grace of the Star Wars franchise.

To be fair, after the trilogy’s first film, JJ Abrams’s Star Wars: Episode VII – The Force Awakens (2015) — although fans were not necessarily sold on the new core trio of Rey (Daisy Ridley), Finn (John Boyega), and Poe Dameron (Oscar Isaac) — most were certainly willing to give these new characters another shot.

Then, Rian Johnson’s wildly divisive Star Wars: Episode VIII – The Last Jedi (2017) hit theaters, and the majority of Star Wars fans hit the roof. There was, admittedly, a lot to complain about in the film. Whether moviegoers were dissatisfied with Jedi Master Luke Skywalker’s (Mark Hamill) anticlimactic death on Ahch-To or the general lack of direction in storytelling, it is arguably the most maligned installment in the entire Skywalker Saga.

Finally, the nine-film epic officially ended with Star Wars: Episode IX – The Rise of Skywalker (2019). The film was once again directed by Abrams after Colin Trevorrow exited the project — Abrams has since admitted he lacked direction, and the movie proved it.

The Mandalorian, however, was an instant hit, drawing in lifelong Star Wars fans and newcomers alike with the adventures of Mandalorian bounty hunter Din Djarin (Pedro Pascal) and his tiny foundling, 50-year-old infant Grogu (AKA “Baby Yoda”).

Now, it seems that Favreau and Filoni — who currently have two spinoff series, The Book of Boba Fett and Ahsoka, in the works — may be moving to the “movie side” of the Star Wars universe, per a new report.

It is imperative to note that this has not been confirmed by Disney or Lucasfilm at this time, but the timing of the rumor is intriguing since Patty Jenkins’s Star Wars: Rogue Squadron — announced at the 2020 Disney Investor Day event — was recently officially removed from the production schedule.

This means that outside of Marvel President Kevin Feige and Thor director Taika Waititi’s upcoming Star Wars projects — neither of which have definite release dates — there are no Star Wars movies officially in development at this time.

Although it is not known if a Favreau and Filoni-led Star Wars film would remain within the “Mando-verse” or not, it is intriguing to note that leading man Pascal has previously indicated that he isn’t opposed to playing Din Djarin in a movie.

Again, nothing about a Jon Favreau and Dave Filoni film has been confirmed at this time. Star Wars fans can look forward to Robert Rodriguez’s The Book of Boba Fett starring Temuera Morrison and Ming-Na Wen streaming on Disney+ on December 29, 2021.

The Mandalorian Season 3 is currently filming.

Do you want Favreau and Filoni to lead a Star Wars movie?