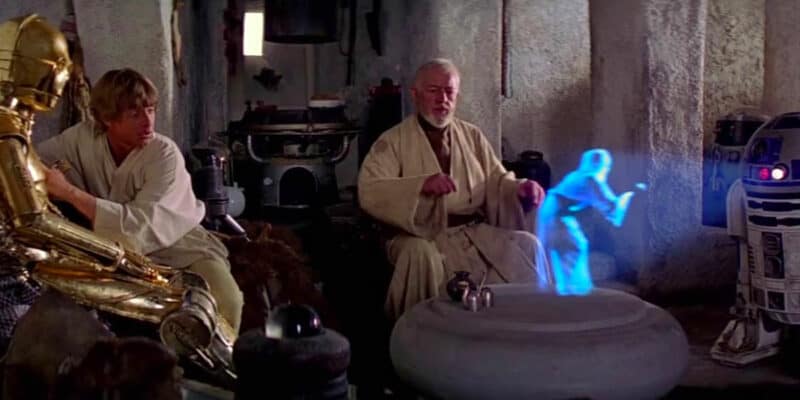 They got their wish in May 2022 when Deborah Chow’s Obi-Wan Kenobi debuted on the Disney+ streaming service. The series saw the returns of prequel trilogy actors McGregor and Hayden Christensen, who reprised their roles as the legendary Jedi Master and Darth Vader/Anakin Skywalker, respectively.

Obi-Wan Kenobi also introduced Vivian Lyra Blair as a 10-year-old version of Princess Leia Organa. Over the course of the six-episode series, Star Wars fans learned that Leia and Obi-Wan had a huge adventure across the galaxy together during her youth after she was kidnapped by bounty hunter Vect Nokru, played by Red Hot Chili Peppers bassist, Flea.

The plot of Obi-Wan Kenobi centers around the title character being called out of hiding on Tatooine to assist Bail Organa (Jimmy Smits) in rescuing his daughter and seeing to her safe return to Alderaan.

This entire story called into question the iconic original trilogy scene in which Leia’s message to “Old Ben” Kenobi — famously delivered by R2-D2 — indicates that she has never met him.

**SPOILERS AHEAD FOR THE OBI-WAN KENOBI SEASON 1 FINALE**

While the series — which is set approximately a decade after the events of Star Wars: Episode III – Revenge of the Sith (2005) — has been well-received overall by the often fickle Star Wars fan community, people did call this apparent continuity error into question — one theory was that Leia, although highly intelligent for a 10-year-old child, did not actually realize that the man she knew as “Ben” was actually the legendary Force wielder.

Now, however, in the Season 1 finale episode, this seemingly major continuity issue has been solved — and it turns out Leia knew exactly who her rescuer was.

When Obi-Wan goes to check on the young Princess after she is safely returned to her parents, he takes a moment to give her a private goodbye.

The little girl inquires if she will ever see him again, to which Obi-Wan responds the she may but that “no one can ever know” they have a history or it “would endanger us both.”

Leia being Leia — both “discerning” and “passionate” as Obi-Wan himself describes her — took these words to heart. Thus, when the time came for the 19-year-old Princess (Carrie Fisher) to beseech the aging Jedi Master for aid in Star Wars: Episode IV – A New Hope (1977), her message gave no hint of their past adventure.

This scene masterfully solved one what was quickly becoming one of the all-time biggest problems with the Star Wars timeline, and left the door open — as did much of the Obi-Wan Kenobi Season 1 finale — for a second season of the Disney+ Original series.

Are you glad the Star Wars franchise solved this seeming continuity issue?