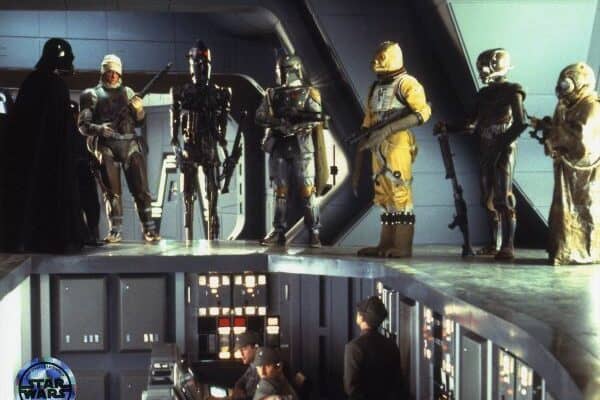 Many Star Wars fans were even convinced that they saw the character in the first official Obi-Wan Kenobi trailer. But now, series director Deborah Chow (The Mandalorian) has debunked the theory, telling Uproxx:

“But that’s not actually 4-LOM though, it is actually a different droid named 1-JAC,” Chow explained. “Everyone thinks it’s 4-LOM.”

This clarification explains the bright green eye the Obi-Wan Kenobi droid possesses, which 4-LOM decidedly did not.

LOM droids were a flawed type of protocol droid, and 4-LOM in particular became ruthless. Alongside IG-88, Dengar, Bossk, Zuckuss and Boba Fett, 4-LOM was one of the six bounty hunters hired to find the Millennium Falcon in ESB.

Although he has not appeared onscreen since 1980, the droid has been featured in several comic book runs, including “Star Wars“, “Darth Vader”, “Bounty Hunters”, and, most recently, the Marvel Comics crossover event “War of the Bounty Hunters.”

The upcoming series is set to follow Ewan McGregor’s title Jedi Master Obi-Wan Kenobi about eight years after the events of Star Wars: Episode III – Revenge of the Sith (2005), including the execution of Emperor Palpatine’s Order 66.

It has long been known that the Inquisitors will make their live-action debut in Obi-Wan Kenobi, and young actress Vivien Lyra Blair will portray a young Princess Leia Organa alongside Grant Feely’s farm boy Luke Skywalker.

As for 1-JAC, details remain unknown. Chow told Uproxx that the fan community will have to “wait and see” what role the new character plays in the Star Wars franchise. Since he does appear to be a LOM droid, it’s possible that he, too, will be a bounty hunter, but this has not been confirmed.

For those unfamiliar with 4-LOM — and some of the characteristics 1-JAC could share — the official Star Wars Databank describes the unlikely ESB fan-favorite as:

A rusty droid with insectile features, 4-LOM was originally a protocol droid, but logic glitches allowed him to escape his programming and become a bounty hunter. That proved a perfect occupation for the cold, calculating mechanical.

Are you sad the droid from the trailer isn’t 4-LOM?