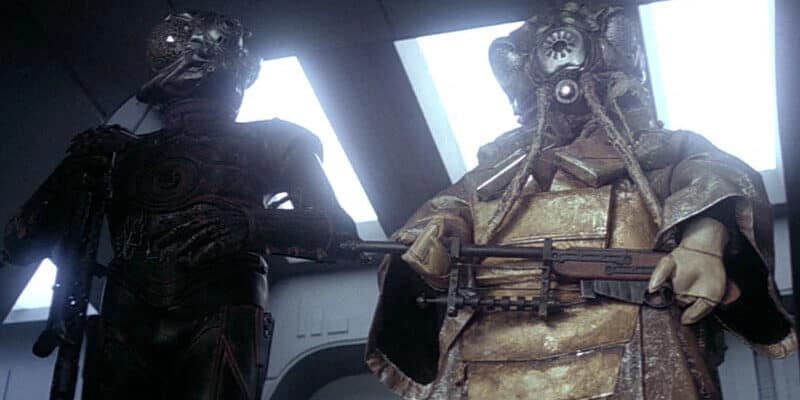 A new trailer for Obi-Wan Kenobi has dropped letting fans see a bit more of the highly anticipated Star Wars series and it seems that Star Wars has failed once again to get the look right for an iconic bounty hunter.

The Inquisitors are searching the galaxy for any surviving Jedi and it seems they have found their match when it comes to Kenobi. To help take down the Jedi, the Inquisitors place a large bounty on the Jedi master, and it probably won’t take long before the Inquisitors realize there is only one force wielder who can take Kenobi down. Darth Vader. That’s why Hayden Christensen has returned as Anakin Skywalker/Darth Vader and fans know there will be a rematch in the series.

Most fans focused on the new shots of the Inquisitors and Ewan McGregor’s Obi-Wan Kenobi in the trailer, but there was a quick moment where fans could see a black droid with a green eye. Based on some reports, it seems that this droid might be 4-LOM, one of the first bounty hunters fans saw in Star Wars: Episode V — The Empire Strikes Back (1980).

If the droid is actually 4-LOM then Star Wars has definitely changed up the droid’s appearance. The first thing to note would be that the droid’s head is a different shape than what is seen in Empire Strikes Back and in the comics which is odd. The other major difference would be that 4-LOM has two glowing green eyes.

Even though it’s possible for 4-LOM to have these major changes, it wouldn’t make sense for the bounty hunter to have a different look a few years later. It’s also strange that 4-LOM’s partner, Zuckuss is nowhere to be seen. Besides his brief cameo in Empire Strikes Back, the droid bounty hunter has mainly appeared in the Star Wars Bounty Hunters run by Ethan Sacks. In the comics, 4-LOM and Zuckuss go different ways once 4-LOM gets hacked and tries to kill Zuckuss during the War of the Bounty Hunters.

While this happens right after Empire Strikes Back, Obi-Wan Kenobi is still years before so it’s very strange that Zuckuss is nowhere to be seen. This isn’t the first time Star Wars has butchered a fan-favorite character’s appearance as fans are not happy with the Grand Inquisitor’s look.

Most likely, the droid seen in the trailer is the same model as 4-LOM and he will appear later on in the series, but it’s possible that Star Wars really did screw up once again with the costume design.

Related: Rare Luke Skywalker LEGO Is Blowing Up the Internet

Obi-Wan Kenobi premieres on Disney+ on May 27.

Do you think the droid is 4-LOM? Let us know what you think!