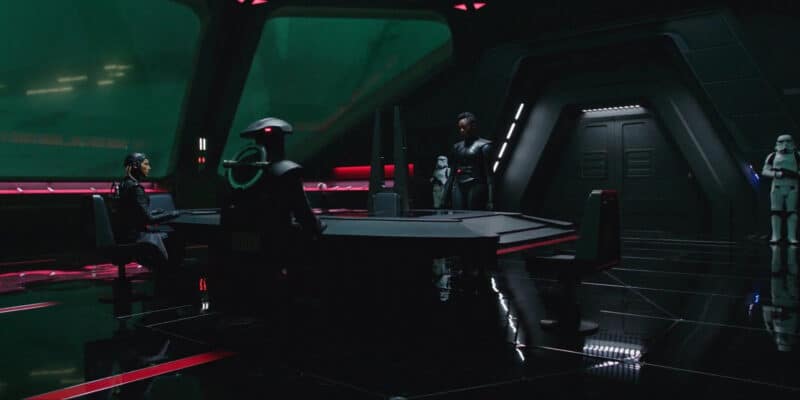 Fans are excited to see Ewan McGregor return as Obi-Wan in his upcoming series, Obi-Wan Kenobi. Obi-Wan will face Hayden Christensen’s Darth Vader once again and it will be the “rematch of the century” when they cross paths again.

One thing Star Wars fans may have noticed in the Obi-Wan Kenobi trailer is that the Galactic Empire is bringing in the Inquisitors to hunt down Kenobi. Some fans may be wondering who the dark-side users are because this is the first time any Inquisitor has appeared in a Star Wars live-action project.

Who are the Imperial Inquisitors?

Imperial Inquisitors are former Jedi who joined forces with Darth Sidious/Emperor Palpatine. This secret organization was called the Inquisitorius and sent the Jedi hunters to kill any remaining Jedi who survived Order 66.

The group of fallen Jedi was trained by Darth Vader after he learned about the secret program. This happened shortly after Star Wars: Episode III — Revenge of the Sith (2005). Jedi Fallen Order revealed that the Inquisitors have a headquarters called Fortress Inquisitorius located on the moon Nur.

The Inquisitors hunted down any remaining Jedi and they usually traveled in small groups. If the Inquisitors found a force-sensitive child, they were instructed to take the child away. Palpatine always had an interest in training several dark-side users and wanted an army of dark-side force users at one point. Just like the Sith, Inquisitors would get a new name except that it would be their number and gender. For example, some of the Inquisitors were called Seventh Sister or Sixth Brother.

When was the Inquisitorius created?

The Inquisitorius was officially created right after the rise of the Galactic Empire, but Palpatine did have some Inquisitors already in place before Order 66. The Grand Inquisitor was originally one of the temple guards and when the Jedi Temple was attacked, he joined the 501st legion and killed his own friends.

Other inquisitors were also given the chance to either join the Inquisitorius or be killed. Other Jedi became Inquisitors after enduring enough torture. During the Clone Wars, Palpatine kept a watchful eye for the Jedi who began to question the Jedi Order. When Captain Rex had to work with Pong Krell during the siege of Umbara, fans learned quickly to not trust the Jedi.

Related: Filoni Is Bringing Back a SLEW of ‘Clone Wars’ Characters

In the four-episode arc, the general’s tactics led to several clones getting killed. Later on, it was revealed that Krell wanted the clones to lose the battle as he was working for Count Dooku. This led the clones to the 501st legion to hunt down the Jedi and they eventually captured the Jedi. If Krell had survived on Umbara, he would’ve become one of the first Inquisitors, but he was killed by Dogma.

How many Inquisitors are there?

The exact number of Inquisitors is unknown, but many fans believe there are around 12 Inquisitors. With Obi-Wan Kenobi, it’s possible that there are more than that. The Inquisitors have appeared in Star Wars Rebels, Jedi Fallen Order, and in the Darth Vader comics.

The Inquisitors will have their first live-action appearance in Obi-Wan Kenobi with the Grand Inquisitor being played by Rupert Friend even though fans wanted Jason Isaacs to reprise his role.

Inquisitors who appeared in the comics

Some of the Jedi hunters went to Mon Cala to find a rogue Jedi who was interfering with Imperial negotiations. Others were involved in killing Jocasta Nu, the main Jedi Temple librarian who hid on Coruscant. Later on, Vader led another group to kill Jedi Master Eeth Koth and take his child away.

The comics also explore how the Inquisitors were moved to a special fortress on Nur to allow the project to have more secrecy. The Fortress is seen and explored in Jedi Fallen Order when Cal Kestis infiltrates the base to get a Holocron.

The Ninth Sister and Second Sister appear in Jedi Fallen Order as they hunt down Jedi padawan, Cal Kestis. Throughout the story, fans learn that the Second Sister was originally a Jedi padawan. Her real name was Trilla and she was captured by the Empire after her master, Cere gave the Empire the information of where she was hiding with other Jedi. Trilla was then tortured and began to hate her master for betraying her and the other Jedi. Trilla then decided to become an inquisitor and hunts down Cal when he starts to work with her old master. In the end, the Inquisitor gets killed by Vader in the Fortress Inquisitorius as she fails to kill Kestis.

The ninth sister’s fate is unknown as Cal cuts off one of her arms during their duel on Kashyyyk, At the end of the fight, Cal used the force to crash a tree on top of her. Some fans believe she is dead, but it’s always possible the character can return once again. There’s a good chance that Jedi Fallen Order 2 will introduce fans to more Inquisitors as they will still be around searching for Cal.

The Grand Inquisitor is the first Inquisitor fans saw in the Star Wars universe. He pursued Kanan Jarrus and Ezra Bridger throughout Season 1 until finally dying by Kanan. This led to the Fifth Brother and Seventh Sister being sent to kill the two Jedi. After several encounters, the two Inquisitors failed to best Kanan and Ezra.

During the finale for Season 2, Kanan and Ezra find the Fifth Brother, Seventh Sister, and the Eighth Brother on Malachore as they were searching for Maul. This led to each of the Inquisitors being outmatched and getting killed by Maul and the Jedi.

Inquisitors who appeared in Obi-Wan Kenobi

The Inquisitors were known to be power-hungry and deceptive. It was very common for an Inquisitor to betray one another. Some Inquisitors died because other Inquisitors wouldn’t help them in a fight. Sometimes they would interfere with each other’s plans to prevent an Inquisitor from succeeding in their mission.

Are the Inquisitors Sith?

The Inquisitors may use the dark side, but they are not Sith. Palpatine and Darth Vader follow the Rule of Two which was created by Darth Bane. This means that the Sith order can only be a master and an apprentice. The Inquisitors are trained to be assassins and their force abilities are strong, but they are not trained fully in the dark side. If one of them were to grow very powerful, Palpatine would send Vader to kill the Inquisitor to prevent the Rule of Two from being broken.

In Star Wars The Clone Wars, Count Dooku had to do this with Asajj Ventress and also with Savage Opress. Even though Dooku failed to kill both of them, they were no longer a threat to the Sith. When Darth Maul came back in Season 5 with Savage Opress as his apprentice, Palpatine traveled to Mandalore and fought the two dark-side users and killed Savage. This was to prevent Maul from becoming a rival since Maul wasn’t Palpatine’s apprentice any longer.

Why are the Inquisitors afraid of Darth Vader?

This harsh training technique was challenged by the Grand Inquisitor, but it let all the Inquisitors remember how dangerous Vader was. In the comics, Vader saw that the unnamed inquisitors — the Twi’lek and female inquisitors — had an attachment and this led to the Sith lord having them killed. As an Inquisitor, they had a lot of power, but it would never compare to Darth Vader’s abilities.

What happened to the Inquisitors?

It’s unclear if the Inquisitors end up getting killed off by Darth Vader, but the Jedi hunters were no longer around once all of the Jedi were taken care of. It will be interesting to see when Star Wars decides to explain the fate of the Inquisitors as they had a large impact on the galaxy as many people remember how ruthless they were in taking care of the Jedi.

It’s unlikely that the Inquisitors live out their days in solitude as they are power-hungry force wielders. Don’t be surprised if the Inquisitorius is destroyed in the Darth Vader comics or mentioned in a novel as most of their story has been told offscreen.

Who is your favorite Inquisitor? Let us know in the comments section below!

Comments Off on ‘Star Wars’: Every Imperial Inquisitor (So Far) in Canon