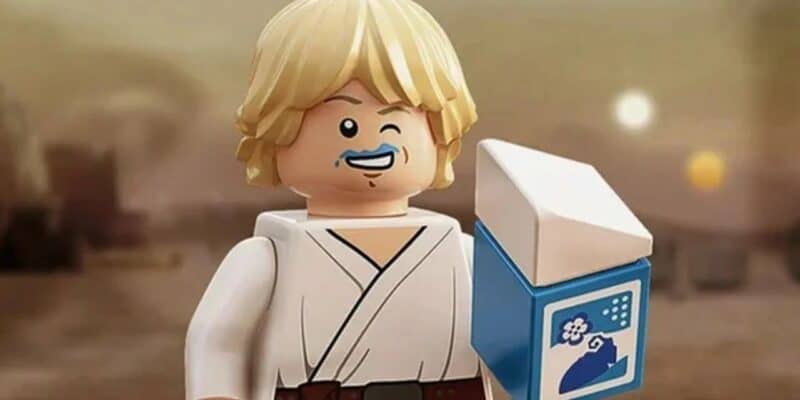 One such item is the special edition “Luke Skywalker With Blue Milk” minifig, which was included with the physical copy of the recently released Deluxe Edition of the “LEGO Star Wars: The Skywalker Saga” video game.

This particular minifigure is currently selling for higher prices than the game itself, as noted by LEGO-centric YouTube channel MandRproductions.

If you head over to websites like eBay, you’ll see this minifig is being listed for hundreds of dollars. It’s being bid on for lower prices but is still going for a reasonable sum, which is not what you really want to see with a brand new product like this.

As you can see in the screenshot above, a blue milk Luke listed for $229.95 Buy It Now has 50 watchers. Another minifigure that is listed for six more days is already selling for $49.00, so it will likely skyrocket by the time the eBay auction closes.

Star Wars fans on Twitter have also noticed the high price of the popular collectible. RikoSuave007Legit noticed that even the sticker from the packaging is being sold as a collector’s item:

These #LEGO #StarWars Luke Skywalker Blue Milk Polybag Minifigures which were included with the PS5 [PlayStation 5]/PS4 [PlayStation 4]/XBOX/NSWITCH [Nintendo Switch] The Skywalker Saga “Deluxe Edition” have been going up in price.

These #LEGO #StarWars Luke Skywalker Blue Milk Polybag Minifigures which were included with the PS5/PS4/XBOX/NSWITCH The Skywalker Saga "Deluxe Edition" have been going up in price.

Just noticed they even beginning to sell just the sticker as collectibles item for $10 each👇😁 pic.twitter.com/WoFS6FqsoG

Jay Jacobson managed to get his hands on one of the rare minifigs, proving that even those who don’t love LEGO are loving this sought-after item:

Not a huge #lego collector, but I could not pass up this blue milk luke. It’s just such a random minifig, and I love the expression. He is now apparently kind of rare now too. Made him nice a classy, hung him up in my nerd room.

Not a huge #lego collector, but I could not pass up this blue milk luke. It's just such a random minifig, and I love the expression. He is now apparently kind of rare now too. Made him nice a classy, hung him up in my nerd room. pic.twitter.com/G4FzrueBaU

Several weeks ago, there was a rumor that the LEGO Star Wars minifigure of the moment was “overproduced and will give given [sic: be given] away on May 4th alongside the real promo 40531”. This has not, however, come to fruition today.

Product 40531, for those who are unfamiliar, is the Lars Family Homestead — perfect, obviously, for blue milk Luke. Brick Fanatics described this year’s Star Wars Day LEGO giveaway as:

The build offers LEGO Star Wars fans a deeper dive into the original trilogy for a truly unique addition to the collection, with a highly-detailed and very sleek recreation of the kitchen from the Lars family homestead, as it appeared in the first act of A New Hope. Within a small scene is a relatively complex and interesting build to recreate something never previously built out of LEGO.

In addition to what is a really very immersive snapshot of a familiar location comes a first-ever minifigure for Aunt Beru. We’ve had Owen Lars minifigures in the past but this is the first time to welcome the other member to Luke Skywalker’s family, seen at the start of A New Hope before meeting an untimely demise at the hands of the Empire.

You can learn more on the official LEGO website.

As for the newest addition to the LEGO Star Wars franchise, official website for “LEGO Star Wars: The Skywalker Saga” notes:

The galaxy is yours with LEGO® Star Wars™: The Skywalker Saga! Play through all nine Star Wars saga films in a brand-new LEGO video game unlike any other. Experience fun-filled adventures, whimsical humor and the freedom to fully immerse yourself in the Star Wars universe like never before.

What do you think about the price of the blue milk Luke Skywalker?