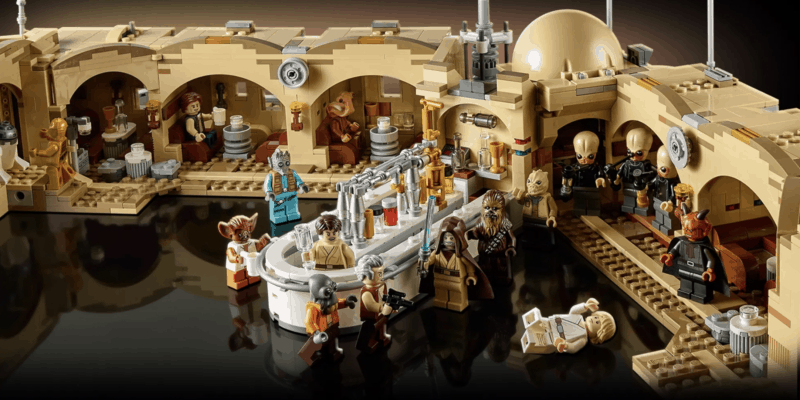 Anyone who knows Star Wars knows that the Mos Eisley cantina is among the most important locations in the entire original trilogy.

As you might imagine, a significant spot like the cantina has caught the attention of Star Wars merchandise manufacturers more than once over the years. Among the most popular products featuring the rabblerousing bar is a LEGO Star Wars set that retails for $349.99.

Recently, one LEGO fan had a hilarious interaction with the popular toy company’s customer service department after discovering his Mos Eisley set was missing quite a few pieces. INC shared the following details:

When John found the Mos Eisley Cantina set at Target, he bought it. It’s not an easy set to get. The set has over 3,000 pieces and will cost you $350–if you can even find it in stock. The book of instructions is 400 pages long. If you’re buying this set, it’s clear you are a pretty big fan of both LEGO and Star Wars.

If that’s you, you might imagine the excitement of opening up the set, sorting the pieces, and following the instructions to build it. You might also imagine that, if you spent hours working on it–only to discover that you were missing a bag of pieces–that would be pretty disappointing. That’s what happened to John.

John, like any good “brick fanatic”, contacted LEGO online and the response he got was truly hilarious:

Thanks for getting in touch with us and providing that information! I am so sorry that you are missing bag 14 from your Mos Eisley Cantina! This must be the work of Lord Vader.

Fear not, for I have hired Han to get that bag right out to you.

Have a bricktastic day and may the force be with you.

As INC noted in their article:

…it might be the best customer service email I’ve ever seen. Not only did it apologize for the mistake, and clearly explain how LEGO would make it right, it did it with a sense of personality. That might be the most impressive part of the entire email.

So, the moral of this story is, if you have a problem with a Star Wars LEGO product, don’t hesitate to reach out for help — and you just might get a delightfully brilliant response in return.

More on the Mos Eisley Cantina

The Mos Eisley cantina is a dimly-lit tavern known for its strong drinks, hot tunes, and occasional outbreaks of shocking violence. Most star pilots visiting Tatooine spend their downtime in the cantina, making it an ideal spot to hire a starship’s crew.

As for the currently sold-out LEGO set, the official description reads, in part:

In the words of Obi-Wan Kenobi™, the Mos Eisley Cantina™ may be filled with danger, but it’s also an epic build that takes fans back to one of the classic moments in the Star Wars™ saga. Introduced in Star Wars: A New Hope, the Cantina is the hub of underworld activity in the Tatooine spaceport of Mos Eisley, filled with smugglers and bounty hunters making deals and starting trouble.

The set includes a galaxy of 21 LEGO® minifigures with seven brand new characters you won’t find anywhere else—three of which feature unique molded elements. With unique minifigures of Ponda Baba™, Dr. Evazan™, Garindan™, Kardue’Sai’Malloc™, three members of the Cantina band, Jawa™, Sandtroopers™ a Dewback™ and more, there are enough unsavory characters to role-play endless Star Wars™ adventures in the Cantina and beyond.

Are you a LEGO Star Wars fan?