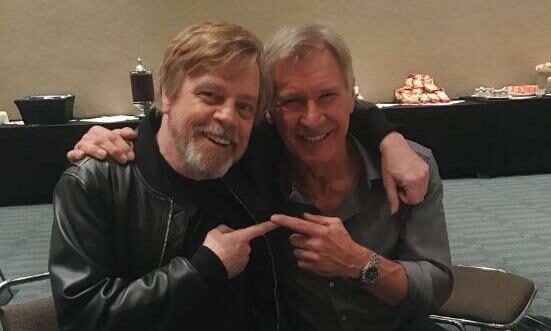 Mark Hamill, the man who has been bringing Jedi Knight Luke Skywalker to life in the Star Wars franchise for over 40 years, is well-known for his social media presence.

He regularly shares behind-the-scenes stories from original trilogy production — including never-before-heard tales about the late Carrie Fisher (Princess Leia Organa) — and has even revealed unknown facts about his work on the first sequel trilogy film, Star Wars: Episode VII – The Force Awakens (2015).

Now, Hamill is at it again, sharing a hilarious tale about how he was actually photoshopped into an iconic 2005 Star Wars cast reunion photo captured by legendary photographer Annie Leibovitz. The actor posted:

How great was it getting together with all those #StarWars folks after so many years?

(Not So) FUN FACT: I was doing 8 shows a week on Broadway & couldn’t be there, so Annie Leibovitz shot me all alone on that empty set & photoshopped me into the group later. #PhonyReunionConfounded face

How great was it getting together with all those #StarWars folks after so many years??
(Not So) FUN FACT: I was doing 8 shows a week on Broadway & couldn't be there, so Annie Leibovitz shot me all alone on that empty set & photoshopped me into the group later. #PhonyReunion? pic.twitter.com/K2MvRi2KES

For his part, Hamill has more recently been part of the Star Wars story’s most popular franchise of the moment. He shocked Star Wars fans when Skywalker made his triumphant return — in CGI form — to the Star Wars story in showrunner Jon Favreau and Dave Filoni’s The Mandalorian Season 2 finale episode (“Chapter 16: The Rescue”).

Then, Skywalker — with R2-D2 in tow — took Grogu away to complete his Jedi Order training.

Following his appearance in Rian Johnson’s Star Wars: Episode VIII – The Last Jedi (2017), Hamill’s future involvement with the Star Wars franchise was uncertain. Now, with Skywalker back in the Star Wars universe, it seems likely that he will somehow continue his work in the galaxy, though we don’t know at this time how it will look.

Rumors have abounded that Marvel star Sebastian Stan (Bucky Barnes/Winter Soldier in the MCU) will take over as a young Luke Skywalker due to his uncanny resemblance to Hamill in the Star Wars: Episode VI – Return of the Jedi (1983) era.

Though both actors have spoken out about the possibility, however, nothing has been confirmed about casting or the Luke Skywalker series that is reportedly in development. For now, all we can do is wait for The Mandalorian Season 3 and its spinoffs — Ahsoka and The Book of Boba Fett — to air.