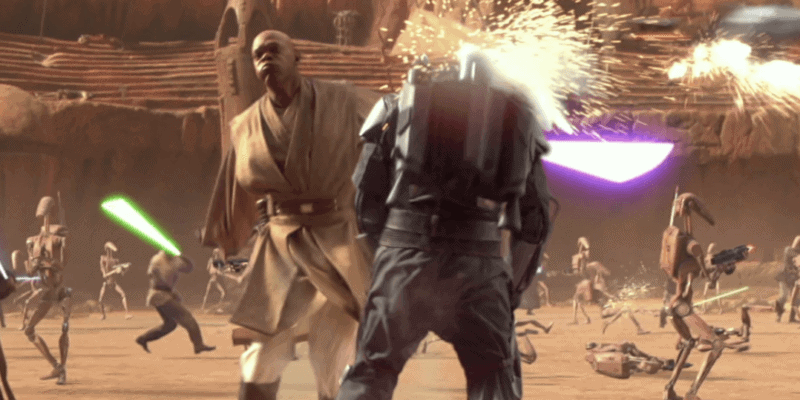 Hollywood legend Samuel L. Jackson (Snakes on a Plane, Captain Marvel, The Hateful Eight) has been involved in some of the biggest movie franchises in history.

From his ongoing role as Nick Fury in the Marvel Cinematic Universe to his appearance as fan-favorite Jedi Master Mace Windu in George Lucas’s Star Wars prequel trilogy, Jackson certainly has no lack of experience in the movie industry.

He’s also a Star Wars fan in his own right — and the actor recently made his opinion about a key scene in Star Wars: Episode II – Attack of the Clones (2002) very clear on social media.

Wearing a shirt that reads, “Check out the big brain on Jango! – Mace Windu”, Jackson wrote:

Literally! Mandalorian My A**!! If you look closely, you’ll see him change his mind!!#lastdaysofptolemygrey#endalz#maceaintdaone

The actor’s t-shirt was, of course, referencing a line his character Jules Winnfield speaks in Quentin Tarantino’s Pulp Fiction (1994). Winnfield says the “Check out the big brain” line to a character named Brett just before his famous “Ezekiel 25:17” speech.

But, in this case, Jackson’s caption referred to Jango Fett’s (Temuera Morrison) death scene in Attack of the Clones.  Star Wars fans are divided on what exactly happened when Boba Fett’s father died — some believe the Mandalorian bounty hunter tried to fire up his jet pack to escape from Windu, but many hold the very strong opinion that the clone trooper template stood his ground until Mace decapitated him.

Jackson clearly falls into the former category, and apparently has very little respect for Jango Fett.

Perhaps the most intriguing part of Jackson’s post, though, is the #maceaintdone (Mace Ain’t Done) hashtag. Rumors have long run rampant that Mace Windu — and his purple lightsaber — will make their return to the Star Wars franchise.

Even Star Wars creator George Lucas himself confirmed that he believes Windu survived his battle with Sheev Palpatine (Ian McDiarmid) in Star Wars: Episode III – Revenge of the Sith (2005), despite falling out of a window after being struck by Force lightning.

There are numerous ways Windu could make his triumphant return to the Star Wars story.

We know, for example, that The Mandalorian spinoff series, The Book of Boba Fett, recently finished filming and there’s certainly a chance the famous Jedi Council member could be one of the characters Boba Fett (Temuera Morrison, again) wants to get vengeance against — after all, Windu did kill his father.

Or, it’s possible that Windu is the Jedi who saved Grogu (AKA “Baby Yoda”) from Order 66 when Anakin Skywalker (Hayden Christensen) killed the Padawan learners at the Jedi Temple on Coruscant. If this happens to be the case, Windu could theoretically show up in either The Mandalorian Season 3 or the upcoming Ahsoka series starring Rosario Dawson.

After all, Dawson’s live-action version of Ahsoka Tano is who finally told Din Djarin (Pedro Pascal) that his Force-sensitive foundling had been rescued from the Jedi Temple during the chaos 30 years earlier.

While we don’t know yet where Mace Windu is going to appear next, it certainly seems like Samuel L. Jackson himself has confirmed that the character isn’t through with his personal Star Wars story yet…

Are you hoping Mace Windu returns to the Star Wars galaxy soon? What other Star Wars characters would you like to see come back in upcoming streaming series?