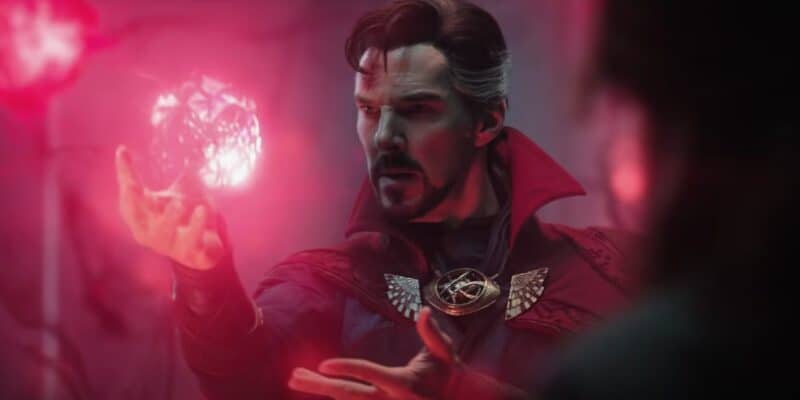 Fans can finally take a look at Doctor Strange in the Multiverse of Madness (2022) for themselves as a scene of the MCU movie was released by IMDB.

Many fans are looking forward to seeing Benedict Cumberbatch return as the once Sorcerer Supreme. The movie will help explain the full consequences of Strange’s decisions in Spider-Man: No Way Home (2021) as a spell-gone-wrong led to the Multiverse opening. Now, Strange will have to face new bizarre threats as Mordo (Chiwetel Ejiofor) returns to take Strange into his custody.

While most of the details of the movie are under wraps, fans have heard countless reports saying that Doctor Strange 2 will have numerous cameos. It’s hard to know which reports are still valid as Raimi has reportedly cut some scenes not that long ago leaving the runtime for the movie to be on the shorter end.

CinemaCon just happened and some fans who attended the event got to see an exclusive sneak peek of the film. While most of the details of what fans saw were kept secret, it was revealed that Marvel showed off around 20 minutes of the movie and that there was a Spider-Man joke included.

Now, IMDB has released a new clip from the movie showing fans a first look at the film for themselves as Strange fights Gargantos. Here’s the video in case you haven’t seen it yet:

Doctor Strange has been known to use some new abilities, but it seems that Sam Raimi has made sure that the magic user’s abilities are stronger than ever before. Right away, Strange is seen walking down the street and sees the bus levitating in the air. He immediately decides to use a spell that reveals that Gargantos was holding the truck. This type of magic hasn’t been used by Strange yet, and it’s odd that the creature was hidden from everyone beforehand.

Then, Strange separates the bus into different parts, but the pieces of the bus turn into mirage-like spirals. This is another example of magic Doctor Strange hasn’t been seen to use just yet. He then uses a piece of metal to cut a tentacle from Gargantos, but it seems that Strange is easily defeating the monster based on the clip shown. One thing to note is that Strange is normally seen to use his most powerful magic while in the Mirror Dimension, but these spells are done in the normal world which shows just how powerful Doctor Strange really is.

Knowing Sam Raimi, this is only the tip of the iceberg for what Strange will do in the movie. Strange is rumored to be fighting Elizabeth Olsen’s Wanda Maximoff/Scarlet Witch at one point in the film so it’s good to see Strange at his most powerful. If he wants to stand a chance against Wanda, Strange will definitely need all the spells he can use because the Scarlet Witch is a very dangerous opponent.

Do you think Strange will use more bizarre magic in Doctor Strange 2? Let us know what you think!