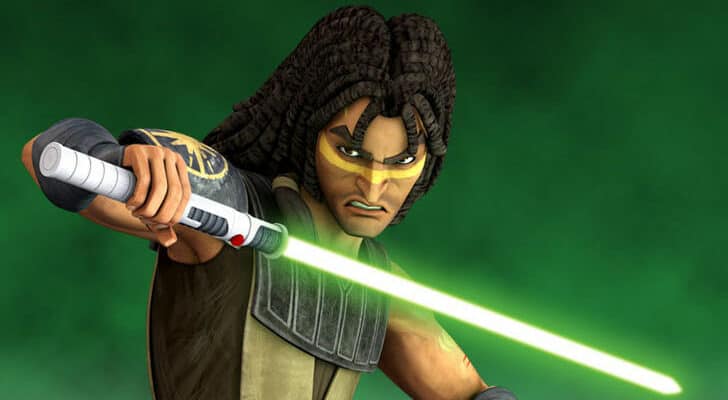 Quinlan Vos (Al Rodrigo) is a fan-favorite character from George Lucas and Dave Filoni’s animated series, Star Wars: The Clone Wars, although his true debut was as a background character on the streets of Tatooine’s Mos Espa in Star Wars: Episode I – The Phantom Menace (1999).

The series, which also introduced other beloved characters like Anakin Skywalker’s Padawan Ahsoka Tano (Ashley Eckstein), ran for seven seasons and remains popular in the Star Wars fan community today. Rosario Dawson took over as Tano for her live-action debut in The Mandalorian Season 2, Episode 5 (“Chapter 13: The Jedi”).

Now, Star Wars fans are ready for Vos to have more of a live-action presence, and they think he might have actually already finished filming it. The upcoming Obi-Wan Kenobi series, directed by Mandalorian alum Deborah Chow, is set to debut on Disney+ on May 25, 2022.

Reddit users are convinced that Nanjiani is set to portray the rebellious Jedi.

GivenumDaBiznes posted a doctored photo of the actor as the character, writing:

QuiJon70 speculated about how Vos could be worked into the story:

Maybe a phantom menace kind of ploy. The new empire wants Alderaan’s support for something. So hires or secretly supports another house on the planet who challenges Organa [Bail Organa (Jimmy Smits)] by kidnapping his daughter [Princess Leia Organa]. Bail knows the house would never be so bold without support and the empire is only willing to “help” return leia if he supports their agenda. So Bail sends for Obiwans help.

CYNIC_Torgon had thoughts about the prospect, noting:

I don’t dislike the idea, but I feel like Kumail’s voice and cadence is very different from the Quinlan Vos we know from clone wars(who I would describe as kind of a Surfer Bro). Now granted it’s totally possible the Quinlan has changed over the decade or that Kumail is a much more capable vocal actor than I am giving him credit for.

Quinlan has definitely changed, to be a much more haunted and serious character. So not necessarily to something that’s more compatible with Nanjiani’s past work. Id definitely be willing to see him in the role, but honestly it’d hurt some of the excitement I had after hearing he was in the show. I’d be a lot more excited about the idea of him playing an original character.

Vos was the Wookiee home world of Kashyyyk during the execution of Emperor Palpatine’s Order 66, meaning he was almost certainly a survivor of the Great Jedi Purge. It has long been known that Vader’s Inquisitors will make their live-action debut in Obi-Wan Kenobi, so it is possible that they will be hunting both Jedi Knights at some point.

Thus, it’s not unlikely that he will turn up to somehow assist his old companion, Kenobi, in the upcoming series, which will be set approximately eight years after the execution of  Order 66 in Star Wars: Episode III – Revenge of the Sith (2005).

At this point, Jedi Knight Kenobi is living in seclusion on Tatooine — far away from his former Padawan Darth Vader  — looking after young farm boy Luke Skywalker from afar.

It is important to note that Nanjiani’s character has not been confirmed. Previously, many fans “fan cast” Vos with Jason Momoa (Aquaman, Aquaman and the Lost Kingdom).

The Star Wars databank describes the Jedi as:

A Jedi with a sarcastic sense of humor and a reputation for not playing by the rules, Quinlan Vos was an expert tracker renowned for his ability to read memories from objects people handled. The Jedi Council sent him on a mission to assassinate Count Dooku, during which Vos fell in love with the assassin Asajj Ventress and was forced to learn the ways of the dark side of the Force.

Do you think Kumail Nanjiani is playing Quinlan Vos?