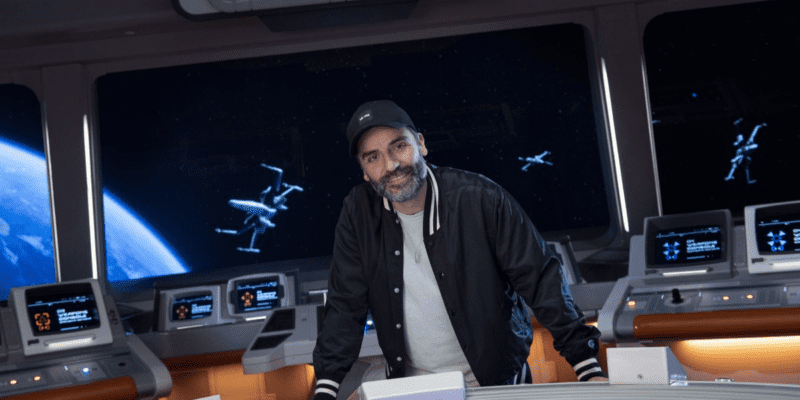 The Star Wars universe just launched the Galactic Starcruiser at the Walt Disney World Resort, and Poe Dameron himself had to pay a visit.

Dropping off his X-Wing with BB-8, Oscar Isaac traded in his Resistance fighter outfit for Disney’s controversial retractable lightsaber as the Halcyon crew welcomed the Star Wars sequel trilogy stay aboard.

Despite the underwhelming and negative reviews the Galactic Starcruiser has received from the media and public, Isaac is onboard for the new vacationing experience:

Oscar Isaac, as well as with many visitors, was all smiles when touring the Galactic Starcruiser. The Poe Dameron actor exclaimed, “It feels like the sets I was on. I don’t see the seams anywhere.”

Nonetheless, the Galactic Starcruiser has been subject to negative reviews, with many claiming that the $6000 two-night adventure is not worth the money:

Everything I’m seeing from the Galactic Starcruiser so far would’ve been super cool featured in Galaxy’s Edge for normal park admission prices. Not with an almost $5000 price tag

Everything I'm seeing from the Galactic Starcruiser so far would've been super cool featured in Galaxy's Edge for normal park admission prices. Not with an almost $5000 price tag

Nonetheless, Oscar Isaac had a heyday at the Walt Disney World’s newest, most immersive Guest experience yet. His faithful love for Star Wars, something he’s talked about for years, indeed came alive while experiencing the revolutionary fun aboard this new Star Wars story — something that all Guests can experience beginning March 1, 2022.

As the itinerary continues, you’ll take the story further and more profound. Choose your path. Seek out the inner workings of the legendary starship, learn the traditional art of wielding a lightsaber and even jump on a transport to the planet Batuu—where your mission continues at Star Wars: Galaxy’s Edge!

On March 1, 2022, Guests will be able to board the Galactic Starcruiser themselves in Orlando, Florida, and launch into the Star Wars galaxy. Whether they sit down for a holographic round of Sabacc or learn how to reflect blaster shots in the new retractable lightsaber, Guests of all ages will be blown away by the immersive, groundbreaking technology featured on board!

You can watch a full tour from YouTube powerhouse Ordinary Adventures below:

It seems that the Star Wars-the loving couple was having a blast, giving fans a full tour of the impressive and surprisingly spacious sleeping quarters, as well as getting teary-eyed over the immersive Guest interactions with Rodian species.

As a result, Guests aboard won’t be seeing any signs of the Death Star, Jedi Knight Obi-Wan Kenobi (Ewan McGregor), and more from the classic Star Wars franchise.

What do you think about the Star Wars: Galactic Starcruiser? Let us know in the comments below!