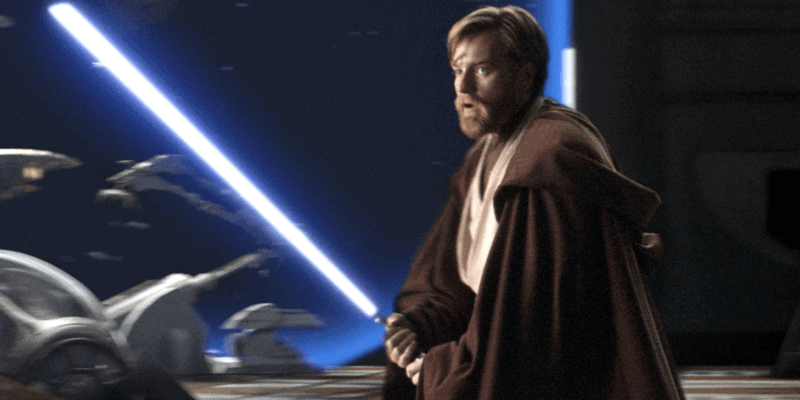 In Episode I – The Phantom Menace (1999), Episode II – Attack of the Clones (2002), and Episode III – Revenge of the Sith (2005), many Star Wars fans found McGregor’s portrayal to be a bright spot in a trio of films that, at least at the time, were not acclaimed.

In the intervening years, however, nostalgia has reigned and the fandom is now thrilled to see McGregor reunite with Hayden Christensen (Anakin Skywalker/Darth Vader) in the upcoming Obi-Wan Kenobi series. Now, however, fans seemingly don’t have to wait any longer to find out how the show is going to begin.

[Obi-Wan Kenobi] footage [was] shown in Burbank recently and in that footage is what appears to be the Jedi Temple from the prequel trilogy. Clone Troopers are attacking two young Padawan learners who are being protected by two Jedi Masters. The two Jedi seemed to be in their late teens to early twenties.

The two Padawan learners look on as their masters are killed. The masters die to allow their students to live, and the pair escape the massacre as they fight their way out of the temple to freedom.

Although the Deborah Chow series is set about eight years after the events ofRevenge of the Sith (2005), when McGregor’s Jedi Master is in exile on Tatooine, it seems we will pick up during the execution of Emperor Palpatine’s Order 66, perhaps continuing to fill in the gaps that have long existed within the Star Wars canon.

The Mandalorian spinoff series, The Book of Boba Fett, recently did the same when Jedi Master Luke Skywalker (CGI Mark Hamill/Graham Hamilton) helped little Grogu remember some of what happened to him during the Great Jedi Purge.

While we already knew that Grogu was at the Jedi Temple on Coruscant thanks to Ahsoka Tano’s (Rosario Dawson) Force connection with the foundling, the latest “Mando-Verse” series fleshed out additional details.

Now, in addition to these series, it seems that Obi-Wan Kenobi will continue building on the Order 66 storyline.

Furthermore, it has long been known that Darth Vader’s Inquisitors will make their live-action debut in Obi-Wan Kenobi and that we will see the origin of the Jedi’s time looking after young farm boy Luke Skywalker from afar.

What do you think about this leaked opening sequence?