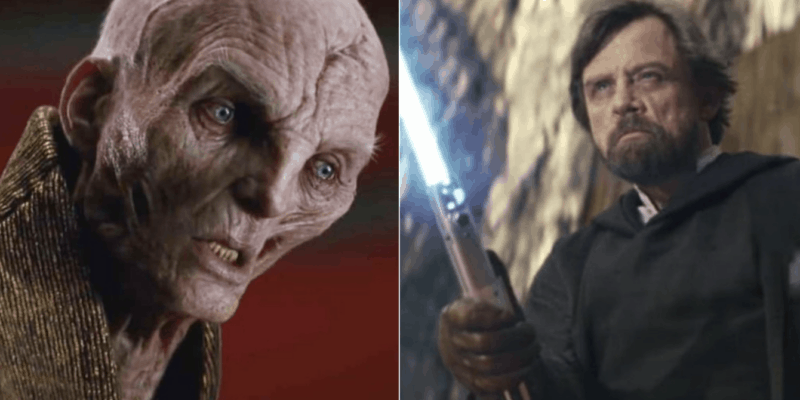 Ever since the Star Wars sequel trilogy — Episode VII – The Force Awakens (2015), Episode VIII – The Last Jedi (2017), and Episode IX – The Rise of Skywalker (2019) — released, the Star Wars fan community has been divided about the final Skywalker Saga films and their collective plot.

Ultimately, the majority of Star Wars fans feel that Disney’s first attempt at a Star Wars trilogy leaned too heavily on nostalgia and failed to focus on propelling the Star Wars franchise into the future.

One of the most befuddling plot points of all was the mere existence of Supreme Leader Snoke (Andy Serkis), a humanoid who served little purpose aside from dying at the hands of Kylo Ren (Adam Driver) so Ren could assume the position of Supreme Leader himself.

And, one particular Star Wars comic may have also provided a key detail about Snoke’s background that was completely left out of the sequel movies. Reddit user BravestAnt1ne pointed out one specific line of dialogue between Ben Solo and Snoke:

“Look what master Luke did to you.”

Did Snoke ever fight Luke? from starwarsspeculation

In the graphic accompanying the post, the full conversation between the duo can be read:

Solo: “Snoke…look what Master Luke did to you.”

Snoke: “Never mind that, my young Ben. Let us consider what he nearly did to YOU.”

Solo: “It doesn’t matter. I killed him.”

Snoke: Do you think so? Luke Skywalker will not die easily, whenever or however it happens.”

Unsurprisingly, commentators had a variety of opinions about whether or not Snoke and Skywalker ever actually battled one another, or if Snoke made up the entire scenario to get Solo — who hated his uncle, but idolized his grandfather Sith Lord Darth Vader — to do his bidding.

I wouldn’t be surprised if he did, nor would I be surprised if Snoke just made it up. It’s obvious through his depiction in TFA and TLJ that Snoke is sort of a groomer and abuser, and a common tactic for those types is to turn their target against the people who truly care for them by playing the victim.

The only question this brings up is… where is the scarring from? The Snoke clones in TROS already seemed to have the scarring while in their tanks but Ben seems to imply that Snoke didn’t already have the scars.

Prior to this moment in the comic, Snoke was communicating with Ben purely through telepathy. Ever since Ben was a child.

If you’re interested, I cover the Rise of Kylo Ren comic quite extensively here with image links.

I think Snoke has just been feeding Ben bullshit for years.

I don’t think Snoke knew that he was an engineered creation. To my understanding, Snoke actually believed that he was his own person who had been around for many years.

With The Mandalorian Season 3 and The Bad Batch Season 2 — both of which Filoni is involved in — on the way, it is not unreasonable to assume that we’ll learn more about how Snoke was created in the first place, perhaps even by Kaminoan Chief Medical Scientist Nala Se.

And, if, in fact, Snoke and Luke Skywalker did have a duel at some point, there is certainly the possibility that we’ll see how it came about — after all, Skywalker’s cameo in The Mandalorian Season 2 finale episode (“Chapter 16: The Rescue”) opened the door for him to become a key part of The Mandalorian saga as Grogu’s Jedi Master.

At this time, Lucasfilm has not confirmed anything definitive about the rumors that Marvel star Sebastian Stan will take over as an original trilogy Luke Skywalker. The studio also has yet to confirm reports that Stan’s Marvel costar Brie Larson will play Skywalker’s Star Wars Legends wife, Mara Jade.

No matter how things play out, however, all the pieces are in place for Star Wars to continue to explain not only how Snoke came to be, but more about Emperor Palpatine’s cloning practices, which have long been in the shadows.

Are you looking forward to learning more about cloning and Snoke’s backstory in the Star Wars galaxy?