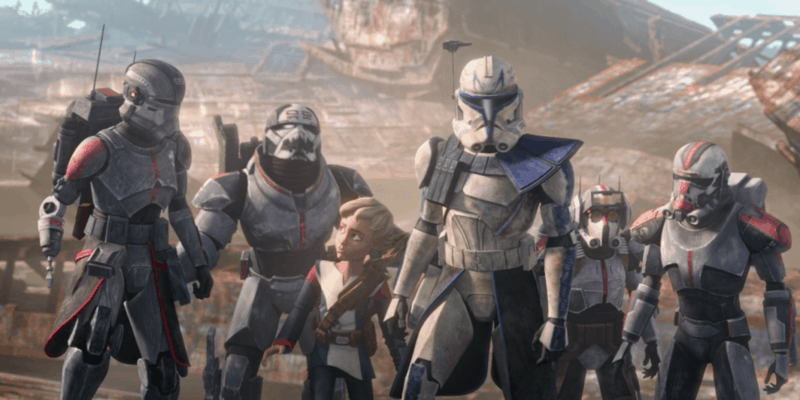 Star Wars is, first and foremost, an adventure about and for the family. George Lucas’s original film entered the world back in 1977 and Star Wars has since gone on to become one of the world’s leading movie franchises. Whether it’s Darth Vader’s ominous presence, a Wampa attack on Hoth, or Anakin Skywalker slaying innocent Jedi Younglings, Star Wars has consistently tested the boundaries of its audience.

This year proved no different. Dave Filoni’s (Star Wars Rebels, Star Wars Resistance) The Bad Batch saw the tragic effects Order 66 had on the clone army, and recently, executive producers Brad Rau and Jennifer Corbett have revealed a key moment that didn’t make the final cut due to it being deemed too scary for a family audience.

Star Wars‘ latest animated series may have just wrapped its first season, but the ramifications of the events that happened not only in the two-part finale but throughout the entire run are sure to continue sending ripples across the galaxy far, far away for quite some time. Filoni’s The Bad Batch has explored, in detail, the effects of Emperor Palpatine’s Order 66 protocol since its debut on Star Wars Day (May 4) this year, the outcome of the cloning facilities on Kamino, and even going so far as to foreshadow Palpatine’s undercover cloning operation after the Clone War ended.

At its heart though is the eponymous “Bad Batch”, Clone Force 99. Made up of Hunter, Tech, Echo, Wrecker, and Crosshair, The Clone Wars follow-up introduced these experimental clones to a rapidly changing galaxy. Taking on a variety of mercenary missions during the first season, Star Wars fans discovered the true cost of the Galactic Empire’s rise to power.

From Jedi Padawan Caleb Dume’s (Freddie Prinze Jr.) escape in the season premiere, “Aftermath”, to Omega’s (Michelle Ang) arrival as another direct clone of Jango Fett, and the sister to the iconic bounty hunter, Boba Fett, The Bad Batch navigated this climactic end to the prequel trilogy era by giving fans just as many questions as answers. We can say that it seems Omega will continue to play a large role in The Bad Batch Season 2 as Star Wars continues to explore how deep the Empire’s cloning program goes as well as teasing her potential appearance in upcoming shows like The Mandalorian Season 3 and The Book of Boba Fett.

The Bad Batch has given fans a balance between humorous, action-packed, heartbreaking, and frightening scenes during its run on the Disney+ streaming service, but perhaps the most emotionally charged episode came when Wrecker’s inhibitor chip activated on Bracca, leading the loveable clone trooper to turn on his comrades in a bid to “follow orders”.

In fact, while this scene was scary in its own way through its call-backs to horror/thriller cinema tropes, the producers of The Bad Batch reveal it could have been a lot scarier.

Via a recent interview with StarWars.com, Brad Rau and Jennifer Corbett discuss the key moment they realized The Bad Batch had gone too far. In a reply to whether the team at Lucasfilm keeps in mind their audience — which includes children –, Rau had this response about the character interaction.

“We wanted it to be scary and chilling, but there were a few shots we pulled that were just too much. He was right on her heels, that classic Jason Voorhees chasing someone. “Oh, wait a minute, we might be going too crazy.””

Rau — who is also the supervising director of The Bad Batch — goes on to discuss the moment where Wrecker is about to find Omega.

“There’s this little camera fake out where you think he’s going to get her, but she’s underneath a different thing. Even that moment isn’t technically a traditional jump scare because the jump scare version of that was too scary. We talked about all of that, and even how the score works. It’s chilling and scary, but we pulled back just a little bit, based on what you’re talking about, for sure.”

The chase scene did feel on the cusp of being too scary for some audience members, especially younger children. The idea of a very skilled, clone trooper hunting down a young girl who had little in the way to defend herself was a very difficult, but emotional moment to watch.

It is interesting that even in the realms of animation that things can still be taken to the extent of being deemed too scary for a family audience. It would be intriguing to discover more moments that the Lucasfilm creators had to pull on the reins on. That being said, The Bad Batch seemed to mark a big shift away from its predecessor in terms of its tone and the sinister overarching themes it achieved through exploring the end of the Republic, the diminishing clone soldiers, and the rise of the stormtrooper era.

Would you have liked to see scarier moments in The Bad Batch? Let us know in the comments!