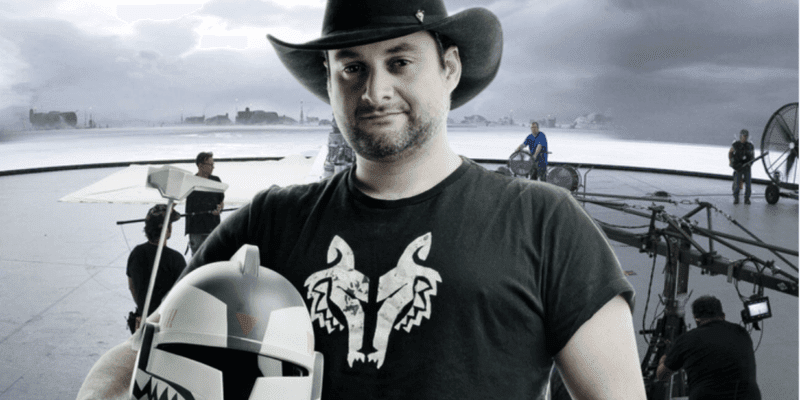 For most Star Wars fans today, their loyalty either lies with Lucasfilm President Kathleen Kennedy — who had to sign off on the divisive Disney sequel trilogy — or with Dave Filoni, the Mandalorian executive producer and Lucasfilm Executive Creative Director who is, to many fans, “saving” the Star Wars franchise.

But, what if the divide between Kennedy and Filoni isn’t as massive as many fans like to think it is?

Although Filoni wasn’t officially in an executive position at Lucasfilm until his quiet promotion in mid-2020, he held a great deal of sway over the fandom thanks to his time working on animated series Star Wars: The Clone Wars and Star Wars Rebels, long before pop culture sensation, The Mandalorian, even existed.

There is no doubt that Filoni’s opinion was taken into consideration in some capacity as the Star Wars sequels — Episode VII – The Force Awakens (2015), Episode VIII – The Last Jedi (2017), and Episode IX – The Rise of Skywalker (2019) — were in development.

As a matter of fact, Filoni himself confirmed that he did some character development with the Lucasfilm Story Group. Last year, Reddit user DarthVadeer posted a photo of a page from Doug Chiang and Phil Szostak’s book, “The Art of Star Wars: The Rise of Skywalker”, in which Filoni spoke about helping to create character arcs for the Legacy characters, specifically Princess General Leia Organa Solo (Carrie Fisher).

“We should shift it so Leia is the Obi-Wan of this entire trilogy [the sequel trilogy]. I don’t even think that it hurts that she’s not primarily that mentor figure in VII because, like John [John Knoll] had been saying, the audience expectation is so on Luke [Jedi Knight Luke Skywalker (Mark Hamill)]. And when that proves not to be true, it’s way more powerful. It’s dangerous, because it makes it so about the women of Star Wars [speaking of both Leia and Rey (Daisy Ridley)]. Something to me says that’s right.”

Filoni has always been keenly in-tune with the women of Star Wars — he even developed Ahsoka Tano (Ashley Eckstein/Rosario Dawson) with George Lucas. So, it’s certainly interesting to get his take on how the sequels were intended to be received, even though that clearly didn’t play out the way he, or presumably the Story Group, planned.

Recently, another Reddit thread has surfaced, in which Star Wars fans discuss exactly how much control they believe Dave Filoni had over the sequel trilogy. The original poster, a user going by YourBestFriendShane, wrote:

This is a real world movie making analysis. I’m interested in more information. How much input did Dave Filoni, and the Story Group by itself, have in The Sequel Trilogy? Do we know much of his stance on them, does he have a favorite, least favorite, is he interested in adapting them to the Galaxy or does he prefer to push back, not that I believe he does, but that’s what certain theories postulate. I think it’s be good to speak on the material we have and put it all out here, for the clarification.

A Redditor going by CorbDog reasonably pointed out that Filoni is seemingly filling in whatever bits of the sequels that he didn’t like with his latest projects, both in Jon Favreau’s The Mandalorian saga and in his own animated show, Star Wars: The Bad Batch:

I’m not sure about his involvement with the sequels but it sure does look like he is adding more back story to the movies. It’s almost like the new movies jumped too far ahead and left alot incomplete. That’s ALOT of story for him to tell.

I.E. What was Luke doing? (We saw him take Grogu) Palpatine/Stoke cloning?(First Grogu then Omega) Don’t think Thrawn/Rebels lines up with the sequels but he could set something up? Probably will see that in the Ahsoka series. I know ALOT of people do not like the new movies but that’s the story that’s been written. Just fill in the story.

Another commenter, whose name Roger-Sterling pays homage to AMC’s Mad Men, shared many details from the Art of Star Wars series:

Filoni was very involved in the overall arc, as was the rest of the LFL story group. It’s all documented in the “Art Of” books. Which are great because they chronicle meetings going all the way back to 2012.

Some highlights from the Story Group called out in the books:

This isn’t to say that someone’s opinion of the trilogy is right or wrong. But the story group was heavily involved in the broad strokes and the overall story.

SteelGear117 holds the opinion that Filoni’s thoughts may have been taken into consideration, but at the end of the day, Kennedy and directors JJ Abrams and Rian Johnson probably had the most control over the Star Wars sequel movies:

Not as involved as certain subs will pretend he was.

He was part of an advisory/opinion group made up of LFL veterans – Doug Chiang, John Knoll, people like that – and they had several set visits and at least one meeting with the story group.

But the key was that, for all intents and purposes, this group had no power and (at least with JJ) were rarely listened too. Rumor has it he did not like the story group interfering with TFA and his return in TROS was conditional on no outside interference (which seems true considering how many lore inconsistencies that film created)

Filoni has been very open about the fact that he had virtually no involvement beside visiting the set of TLJ. He had no say whatsoever in the story, characters or plot. And you can tell, since the ST feels so disconnected and out of sync with the rest of the saga

This last opinion, perhaps, is closest to the truth. While no fan will ever know precisely what went on behind closed doors while the sequel trilogy was being developed — and characters like Ridley’s Rey Skywalker, John Boyega’s ex-stormtrooper Finn, and Oscar Isaac’s ace Resistance pilot Poe Dameron were being brought to life — it is safe to say that Dave Filoni, and Jon Favreau to some extent, are working hard to fill in plot holes, bringing brand new meaning to a trilogy that disappointed so many.

Next up in the Star Wars universe for Filoni and Mandalorian showrunner Jon Favreau are The Mandalorian Season 3 with Pedro Pascal (Din Djarin), The Book of Boba Fett with Temuera Morrison (bounty hunter Boba Fett) and Ming-Na Wen (Fennec Shand), and Ahsoka with Rosario Dawson as the titular Ahsoka Tano.

A third Mandalorian spinoff, Rangers of the New Republic, is “no longer in active development” following Gina Carano’s (Cara Dune) firing from the Star Wars franchise.

What do you think about Dave Filoni’s involvement in the Star Wars sequels?