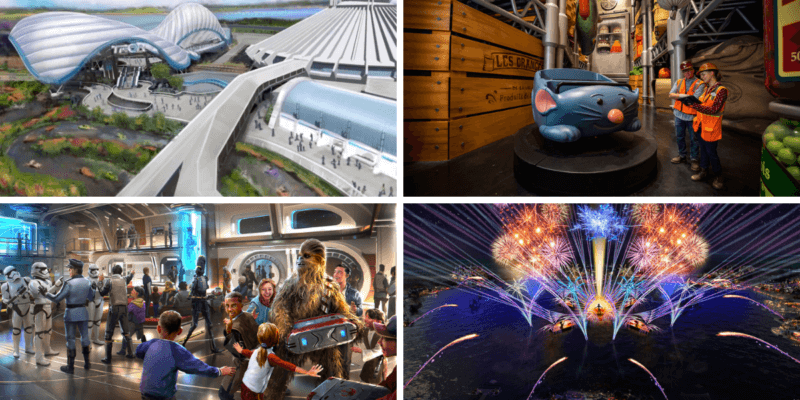 The 2019 D23 Expo gave us all so many Disney innovations to put on our calendars. We were thrilled as we heard details about the EPCOT reimagining, TRON Lightcycle/Power Run roller coaster, and all the other attractions soon to arrive at Walt Disney World Resort as the Resort approaches its 50th anniversary. However, no one could have predicted what 2021 would look like. As the world still suffers from the COVID-19 pandemic, it’s easy to loose hope in promises of a bright future, full of Disney magic. And yet… Disney has not lost hope. Disney continues to push forward through the pandemic. They have taken steps toward a great big beautiful tomorrow, and they keep the hope alive that all their promise are just a dream away.

With vaccines beginning to give the world hope for health, Disney gives the world hope for a return to the magic and all the innovations that go with it. How will Disney keep their promises of renovation and additions in spite of a pandemic? What promises will be kept? Find out as we explore how Disney can, in fact, keep their promises in time for the Walt Disney World 50th Anniversary Celebration.

How Will Disney Keep These Promises?

Just last week, Disney finally announced their 50th anniversary celebration dates for Walt Disney World Resort. The celebration will begin October 1, 2021 and continue for 18 months, running the celebration into 2023! This long celebration is great news for Disney fans because they will have more time to experience the magic. So far, we know this celebration will include overlays for Disney park icons (including additional Cinderella Castle embellishments and a permanent new look for Spaceship Earth), a new EARidescent color scheme, and new fashion for Mickey and Minnie Mouse.

In addition to these exclusive celebration experiences, Disney announced at the 2019 D23 Expo that many new additions and refurbishments would be available “in time for the 50th.” Disney can keep that promise with the long celebration dates. As long as Disney opens these promised attractions before Spring 2023, Disney will offer all these exciting attractions and experiences during Disney World’s 50th celebration. What did Disney promise during the 2019 D23 Expo for this magical celebration? Let’s take a look!

Though Disney did promise a reimagined Spaceship Earth as well, the attraction within the famous sphere will not be updated at this time. Its renovation was cancelled amid other cuts due to the pandemic. However, Disney will be reimagining the outside of this attraction for the 50th anniversary and as mentioned, this change will be permanent. This outer renovation may not completely make up for the cancelled attraction refurbishment, but it proves that Disney is still trying to deliver on their promises to Guests, even amid the unexpected COVID-19 pandemic.

Speaking of EPCOT, the D23 Expo in 2019 also included the announcement of a new experience inspired by Disney’s Moana. This walk-through attraction will not be a ride, but it remains part of the new plans for EPCOT. Nothing is certain with the Journey of Water attraction right now, but it is still in a press release on Disney’s site, so this seems to be a good sign for the experience. With no opening date announced, we may speculate a possible 2021 opening, but nothing is certain until Disney gives a project update. Even if this attraction does not open in 2021, Disney has plenty of time to open this new experience before the World’s Most Magical Celebration is over.

Guardians of the Galaxy: Cosmic Rewind!

Also coming soon to EPCOT, Disney promised a new roller coaster experience starring characters from The Guardians of the Galaxy. The roller coaster will tell a story as you ride, combining Disney’s amazing storytelling techniques with a thrilling coaster, featuring some of our favorite Marvel superheroes. The ride vehicles will rotate to focus riders on the action around them adding to the excitement. This addition signals Disney’s evolution toward IP-based attractions in Disney Parks. Disney did not include this attraction in their upcoming attractions for 2021, so this coaster may have a 2022 opening. As long as this coaster opens close to schedule, Disney will be able to deliver on this promise for the 50th Anniversary.

This new attraction will be in EPCOT’s France Pavilion. Out of the attractions previewed at the Expo, this attraction is the in-progress attraction closest to its completion. Disney recently cast roles for a commercial for this attraction, so we are likely sneaking up on its opening date. This attraction has been deemed a “priority project” and is officially set to debut in 2021, so get ready to scamper with Remy at EPCOT soon.

The ride will be based on the popular Ratatouille: The Adventure ride that can be found at Disneyland Paris’s Walt Disney Studios Park.

EPCOT’s new nighttime spectacular has an official 2021 opening. Though no particular date has been announced, it’s possible Disney could be saving this show to open on the actual 50th anniversary date: October 1, 2021. This new show will focus on Disney music and how music unites people around the globe. This fireworks showcase will take place on the World Showcase Lagoon, with projections and floating set pieces.

HarmonioUS has been described as Disney’s largest nighttime show in history!

Of Disney’s promised attractions, TRON Lightcycle/Power Run one is possibly the most highly anticipated. A nearly identical roller coaster already exists at Shanghai Disneyland, but it’s incredibly exciting to see this fan favorite added to Walt Disney World. Fans cannot wait to race through “The Grid” on cool lightcycles in Magic Kingdom’s Tomorrowland. Unfortunately, we will have to wait a bit longer for this opening. Disney has not announced an opening date yet, but construction continues to progress, albeit slowly. Hopefully, we can still see a 2021 opening for this attraction. It would be amazing to ride this coaster at the beginning of the 50th anniversary celebration!

Have you ever wanted to embark on your own journey across a galaxy far, far away? Whether you’re a Jedi or a Sith, this fantastic new Star Wars hotel is ready to take you on the adventure of your dreams. Originally announced in 2017 and hyped again at the 2019 D23 Expo, Guests at this immersive Disney Resort hotel will be active participants in their own Star Wars stories that play into the storyline of Star Wars: Galaxy’s Edge at Disney’s Hollywood Studios. This one-of-a-kind vacation experience will be ready to delight any Star Wars fan for an immersive 2-night, 3-day adventure soon. In fact, this hotel is still slated to open in 2021 according to Disney’s official website, so here’s hoping we can fly through the galaxy on the Halcyon soon!

With La Nouba long gone and the Cirque’s tent sitting empty, Disney fans may be curious about when the new Cirque du Soleil show will debut. Disney has officially confirmed that the new show, Drawn to Life, will debut in 2021. Though there is not an official opening date yet, Disney Springs Guests will readily receive these performers with open arms when it’s time for Cirque du Soleil’s reopening.

The Disney Genie application was announced as an innovation for Disney vacation planning. This app has no debut date yet, but it’s possible that, if theme park reservations stay as a permanent part of Disney vacations, this app may be part of that new system. If that is the case, we could see this application debut as soon as 2021. At this time, Disney Park Pass reservations are required into 2023.

Disney has not given many updates about this app, but if it is part of the Disney Parks reservation system, we may see more about the app as Disney works to transition the parks to post-pandemic life.

Will Disney Break Any Promises?

Though no dates are for sure until Disney announces them, it appears that Disney is on track to keep many of their promises for the 50th Anniversary celebration. However, Disney did have to break a couple of their promises by canceling two large projects. As mentioned before, Spaceship Earth will no longer receive an internal overhaul or retheme for the foreseeable future.

While this announcement was exciting, Spaceship Earth is still a beloved attraction that will succeed with or without a retheme. In addition, Disney also indefinitely postponed the Mary Poppins themed attraction scheduled to come to the United Kingdom Pavilion at EPCOT. Though this attraction was exciting, it is possible that Disney could still add Cherry Tree Lane in the future — perhaps when the parks have recovered after the pandemic.

For now, Disney is keeping most of their promises. Most attractions scheduled for a 5oth Anniversary Celebration opening should debut within the 18 month long celebration. Disney continues to give the world hope for a better tomorrow with a sprinkling of magic. All they need is faith, trust, pixie dust… and a long 50th celebration that we can all enjoy.

If you want to visit Disney World during its 50th anniversary, consider booking with Academy Travel. They can help you plan each park reservation and magical experience that you will cherish for years to come.

Do you think Disney will deliver on all these promises for the Walt Disney World 50th anniversary celebration? Let us know in the comments!