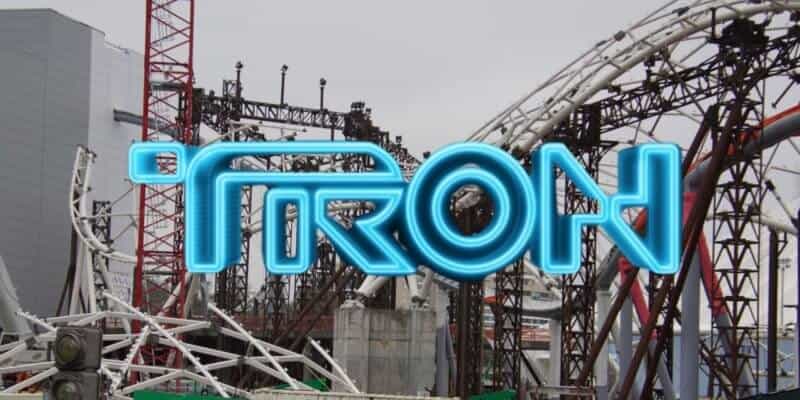 One of Disney World’s most anticipated rides is TRON Lightcyle / Run, set to open at the Magic Kingdom. The newest Tomorrowland attraction pulls from the TRON IP, which is new to the Disney World theme parks — and will give Magic Kingdom another thrill coaster that can compare to Space Mountian or Big Thunder Mountain.

When the announcement to bring TRON Lightcyle / Run to Magic Kingdom was made, many Disney fans assumed that this attraction was going to open in time for Disney’s 50th Anniversary Celebrations. Although Disney has not specified exactly when the celebrations will commence, the official birthday of Magic Kingdom is on October 1st.

With the festivities no more than 8 months away, the likelihood of the TRON Lightcyle / Run construction coming to a close does not seem promising.

Related: Will EPCOT Be Ready For the 50th Anniversary? Full Construction Update

Bioreconstruct (@bioreconstruct) recently posted a photo to Twitter of the current state of the TRON canopy frame, as can be seen from Storybook Circus. From what we can see below, it seems that although the canopy is complete, it has yet to have its structural beams removed, which means it is not yet freestanding. To add to that, the coaster tracks are also incomplete as we can see part of the white track lead to nothing.

Current state of the Tron canopy frame, as seen from Storybook Circus. pic.twitter.com/U3CpugV3Ro

We previously reported that Disney closed off the hole which lets out Guests from the interior show building, and it seems that that passageway is still sealed tight. Although we do not specifically know why the hole was covered, it is likely because internal construction is ongoing within the building at the moment.

From this, we can see that progress is being made, but it is not moving at too quick a pace. TRON Lightcyle / Run was also not mentioned in the list of 2021 attractions such as Guardians of the Galaxy: Cosmic Rewind or Remy’s Ratatouille Adventure, which are set to open at EPCOT. That being said, Disney has not yet confirmed the coaster’s opening date.

If you are impatient and want to ride TRON, you can check out our video of the attraction in Shanghai Disneyland. Although the Disney World attraction may not be identical, it is going to be very similar to the original Shanghai coaster.

If you want to ensure you will be at Disney World for the 50th Anniversary Celebrations, you need to get started on a Disney vacation! Click here to book your trip to Disney World.