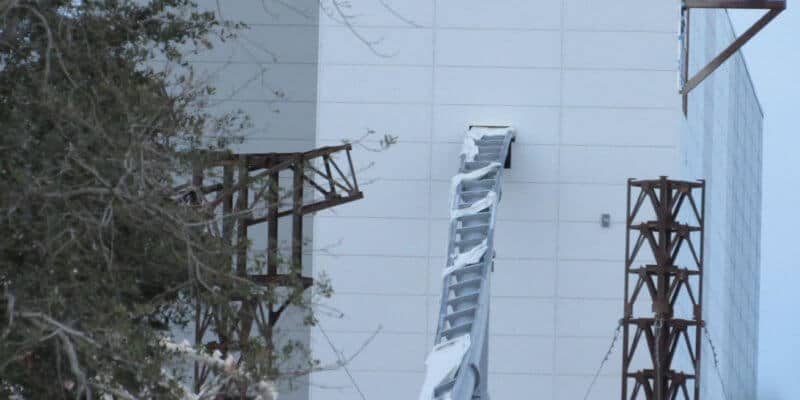 If you have recently visited Magic Kingdom and noticed the massive construction progress underway inside of Tomorrowland, you may have some questions.

The TRON coaster construction is very visible for Guests (at least the outside portion of the attraction), but Disney has confirmed very little about the attraction. Recent photos of the fully enclosed part of the track have raised many eyebrows in the Disney community. So, let’s talk about what is going on with TRON Lightcyle / Run.

Will it be a clone of the Shanghai attraction?

Disney has not officially stated whether or not the TRON Lightcycle / Run attraction will be an exact clone of its counterpart in Shanghai Disneyland. While we have all assumed it will be an exact replica of the original, there could be minor differences that will set the attraction apart. We will not know for sure until the attraction opens for Guests at the Magic Kingdom.

Here is the concept art for the Disney World version of the ride:

And here is a ride-through of the Shanghai version of the roller coaster:

When will it open?

Disney has not given an official opening time frame for the attraction. While it was initially thought to open for the 50th Anniversary Celebration of Walt Disney World it could have suffered delays due to the ongoing pandemic. It appears that construction has been moving quickly since it has been able to resume, but we have no idea what it looks like on the inside of the show building. Disney also has not confirmed that TRON Lightcycle / Run will be opening in 2021, so an exact opening date is yet to be determined.

What’s going on with the track?

Though we cannot say for sure, we believe that Disney could want to keep the movements happening in the show building a secret — therefore, this may be why they have decided to enclose that entire section of track and our view inside the building. There are many other plausible answers and possibilities as to why the canopy was built in the order that it has been, one being that, structurally, this is what had to happen for work to continue. The attraction may also be fully enclosed so that Disney construction crews can take their time on the completion of the attraction: if Guests can’t see what’s going on, then it is harder to determine how much work is progressing.

Although we may have lots of speculation going on about this coaster, we can assure you that after the amount of construction Disney has undergone on this attraction, you will likely have a smooth ride your first ride on TRON Lightcycle/ Run at Magic Kingdom. It truly seems like an attraction worth the wait!

So what do you think about TRON Lightcycle / Run? Are you excited about the attraction? Do you think it will open in 2021? Let us know your thoughts in the comments!

Click here to book your trip to Disney World!