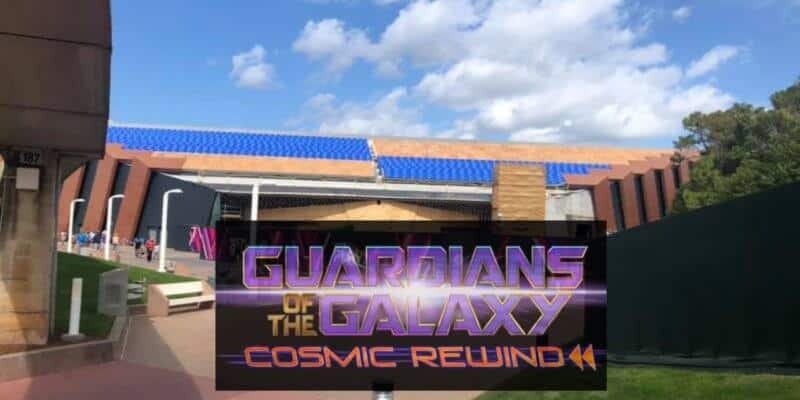 Any Disney World Guest who has recently visited EPCOT can surely agree that Future World is a construction zone. With construction walls up at every turn, it is hard to see how the reimagining progress is going. One of the biggest projects currently underway is Guardians of the Galaxy: Cosmic Rewind, a new storytelling Marvel coaster that is set to open in the future! That being said, with such a close due date construction on the coaster is moving slowly.

Related: First Look at Upcoming Guardians of the Galaxy Coaster

Guardians of the Galaxy: Cosmic Rewind is an indoor coaster that will spin as riders blast off and experience the attraction. Although we cannot see the indoor portions of the coaster, we can see how the exterior is doing in terms of construction. Currently, it seems that there is still an extensive amount of work to be done on the project, and although Guests would love to see it, a 2021 opening seems like an unattainable goal.

It is interesting to have seen Disney deem Guardians of the Galaxy: Cosmic Rewind a “priority project” — possibly so that it could open for Disney World’s 50th Anniversary Celebrations — but for construction on the exterior of the coaster to be moving so slowly we will not be surprised if the coaster opens next year in 2022. To confirm, Disney did not announce that this coaster would open in 2021, so the slower pace of construction on this attraction is warranted.

Related: Construction Continues on Guardians of the Galaxy Ride at EPCOT

As we can see, the entire roof is still incomplete, which has been the status of that section of the attraction for quite some time now. We can also see that the entryway to the attraction is still only wood and steel beams. To not have a closed-off exterior on an attraction that is expected to open in the upcoming months does not look too promising.

We know that there has been extensive work that has gone on in the interior of the show building as Disney has shown photos of completed portions of the coaster track. Additionally, the ride vehicles were spotted being transported to EPCOT from the highway. Disney has shown a sneak peek of the ride vehicles on a mock coaster track to help fans get excited about the new attraction.

All of that being said, progress is still underway for the coaster. We can see what is likely the marquee of the attraction already erected in front of the entrance, and all of the wooden paneling that will make up the entrance to Guardian of the Galaxy: Cosmic Rewind is new.  The roofing seems to also be getting covered to have further work done. Whether or not the speed of the construction picks up so that the coaster can open for the 50th Anniversary Celebrations of Walt Disney World, well, we will just have to wait and see!

The coaster may be a “priority project” for Disney, but considering we have no opening date noted as of yet, expectations are subject to change!

Do you think that Guardians of the Galaxy: Cosmic Rewind will open in 2021 for Disney World’s 50th Anniversary Celebrations?