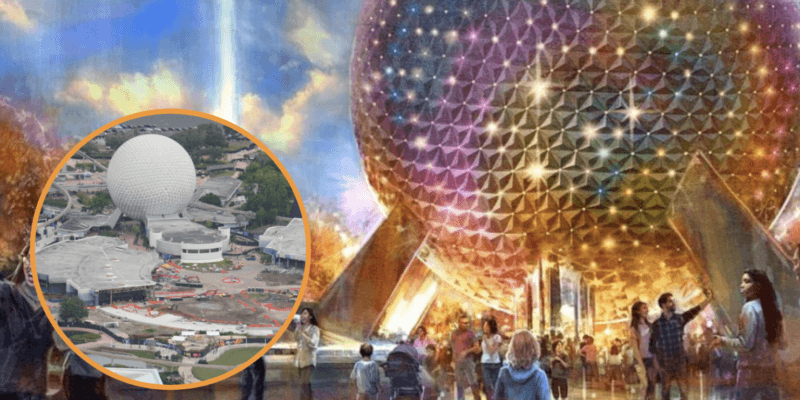 Although certain projects have been scrapped or delayed as a result of the coronavirus pandemic — which caused the Florida theme park to close from March 20 through mid-July earlier this year — the Disney park is still set to undergo a massive reimagining to move it firmly into the 21st century.

Here, we see an “Aerial photo of current demolition of former Innoventions West.” Reportedly, the new Moana: Journey of Water attraction will be located in this area when the new World Nature neighborhood is completed.

In this image, @bioreconstruct shares the “Remaining section of Innoventions West at night.” This portion of the structure is also expected to be demolished at some point.

In these two EPCOT construction photos, @bioreconstruct gives us first an “Aerial look at the current demolition of Innoventions West. Arrow at recently added tents for worker break time. Tables are physically distanced due to pandemic.”

The second picture gives a closer-up view of “A look at tents for break time inside the work site for the EPCOT World Celebration neighborhood.”

Throughout the COVID-19 pandemic, The Walt Disney Company has made clear that Cast Members’ and Guests’ health and safety is of the foremost importance to the company. It is interesting to get a behind-the-scenes look at one of the measures that is being taken to keep EPCOT construction workers safe as they continue their efforts to transform the Disney park.

A look at tents for break time inside the work site for the EPCOT World Celebration neighborhood. pic.twitter.com/qmDgCkaqgy

The second photo caption reads, “A look (yesterday) at demolition of the former electric Umbrlla quick service restaurant in EPCOT.”

A look (yesterday) at demolition of the former Electric Umbrella quick service restaurant in EPCOT. pic.twitter.com/YCUepab7MH

Finally, @bioreconstruct leaves us with a shot of the iconic Spaceship Earth area, sharing, an “Aerial overview of the current state of the World Celebration neighborhood of EPCOT.”

Aerial overview of the current state of the World Celebration neighborhood of EPCOT. pic.twitter.com/svVt2BPGJW

Are you excited about this brand new version of the EPCOT theme park we’ve all come to know and love?

If you want to plan a Walt Disney World vacation, contact the experts at Academy Travel. They can help you plan the perfect visit to any of the Resort’s four theme parks — Magic Kingdom, EPCOT, Disney’s Hollywood Studios, or Disney’s Animal Kingdom — in the Disney Park Pass age!

Comments Off on Photos: Get a Bird’s Eye View of EPCOT’s Progress