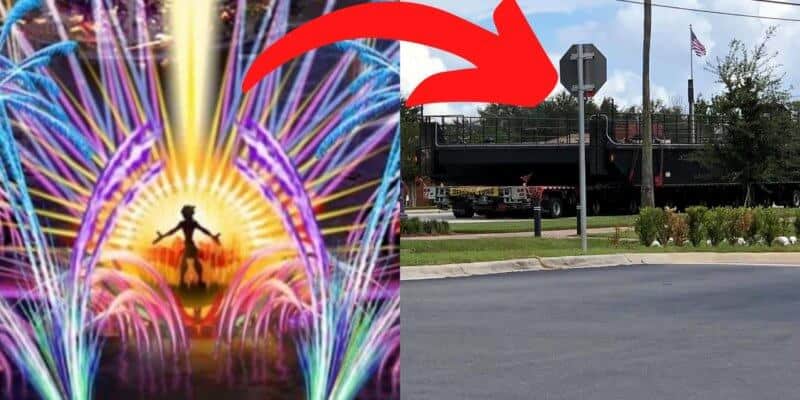 If you were driving in Orlando today, you may have seen a giant black contraption spanning across lanes on it’s way to Disney World! The giant object looks suspicously like one of the barges that will be used in the upcoming EPCOT nighttime spectacular, HarmonioUS.

Today, Instagram user @heychrismartin snagged a peak at the heaping pile of what will surely be wonderfully crafted Imagineering technology on it’s way to the park entrance at EPCOT. Chris mentioned that the barge was being ‘escorted’ by police while on the way to it’s new magical home.

Just from these photos alone, we can see that the barge is massive, similar to others we have seen in aerial shots of construction. The barges which are being build EPCOT right now have seemed to progress along nicely,  and it looks like Disney is adding one more to the mix!

This sighting comes days after Disney filed for a new permit to add additional mooring for center barge. Although the new barge and the permit were discovered within days of each other, the center barge looks to be sitting in EPCOT already, with LED screen construction rapidly moving forward. That being said, the show will heavily utlitize LED screens alongside lasers, lighting, and pyrotechnics. All this to say any barge could truly be the centerpiece of HarmonioUS!

We recently reported that more barges have been showing up in EPCOT, so the addition of the latest HarmonioUS “performer” makes sense. Especially considering that amount of technology and effects the show plans to utilize at the same time, it will take various platforms and barges to create the magnificent overall view of what is supposedly going to be the best nighttime show Walt Disney World has every created.

When is HarmonioUS coming to EPCOT?

Due to the pandemic we are facing, many Disney World offerings have been put on hold, nighttime shows being one of them. This is due to the large, close-proximity crowds they draw, as well as parks operating at reduced hours. HarmonioUS was originally meant to make its debut in 2021, following it’s short term predecessor, EPCOT Forever. Unfortunately, the new launch date for HarmonioUS is now a mystery.

There is some good news, however! EPCOT was recently testing fireworks after park close, and considering so many barges are already in the lagoon, many Disney Guests are hopeful that the testing was for the new firework show. Since that initial test, we have yet to hear of any extra testing going on.

If you want to be in the know on all things HarmonioUS, you can track this story with us! Subscribe to our mailing list below and you will be the first to know when EPCOT will be shooting fireworks in the sky!

Are you excited for HarmonioUS and when do you think it will open? Let us know!

Comments Off on Police Escort Leads HarmonioUS Barge to EPCOT