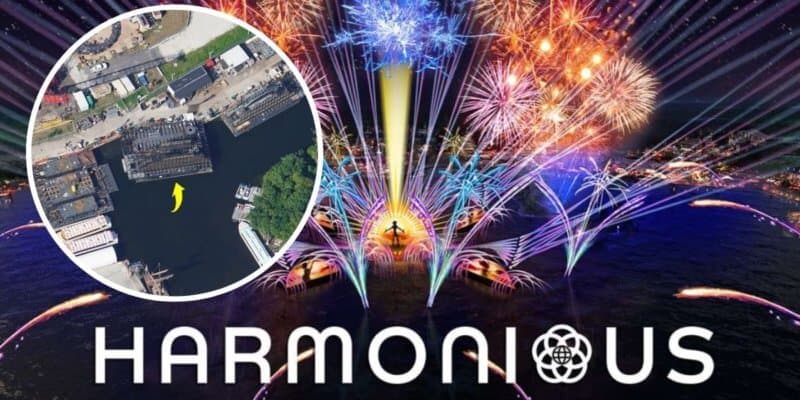 Inside the Magic has been keeping you all updated on the construction progress being made for the new EPCOT nighttime spectacular, HarmonioUS, and now we have another fun and exciting update to share with you all!

Disney recently filed a permit for the address of 1650 A1 Avenue of the Stars, Bay Lake, FL 32830. The permit lists “Installation of anchors to provide additional mooring for center barge” as the description of improvement. Also, it wasn’t long ago we reported more barges showed up at the EPCOT lagoon, also for the upcoming nighttime spectacular, so this is just another step in the construction progress.

It is really exciting to see Disney continue to work on the soon-to-be nighttime spectacular, but it is also important to keep in mind that we do not know when HarmonioUS will make its debut.

Construction had to come to a pause earlier this year due to the pandemic, and when Disney World reopened to Guests in July, they announced fireworks, nighttime spectaculars, parades, and other shows would be temporarily unavailable to ensure Guests’ safety.

Inside the Magic will continue to update you as we get new information, but for now, this recently filed permit is an exciting step!

Aerial look at HarmonioUS construction. Large ring not yet placed on barge at yellow arrow. This is going to be flat LED screens across the ring, rather than a sphere. Note the rotating arms and their mounts at the small barges. pic.twitter.com/3m1KxzcSRA

At D23 Expo in 2019, Bob Chapek spoke about HarmonioUS and stated it would be the “largest nighttime spectacular in Disney history.” HarmonioUS will be shown over the World Showcase Lagoon, only this show will be even bigger and more epic than anything we’ve seen before at EPCOT.