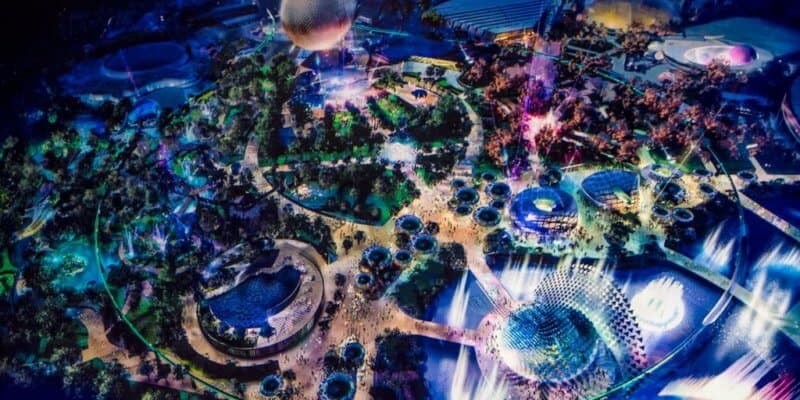 At the 2019 D23 Expo, a complete reimagining of EPCOT’s Future World was announced. Many Disney Parks fans have felt that this area could use a refresh for years, so this was welcome news.

During Disney World’s COVID-19 closure, however, EPCOT’s numerous construction projects became problematic and many were canceled or postponed due to financial concerns at The Walt Disney Company.

Aerial overview of construction at what will be the World Discovery neighborhood of EPCOT. pic.twitter.com/oTo7VEu1cz

In this photo, the Play! Pavilion, which has recently undergone major exterior progress, can be seen on the far right. This structure will be an Imagineering playground, filled with interactive activities for the entire family.

The highly anticipated Moana themed water attraction will also be located in World Discovery, though any progress that has been made on it does not appear to be visible in this photo.

Aerial overview of construction site of the World Celebration neighborhood of EPCOT. Note the orange barriers forming corridors for travel in the site. Arrow shows these corridors continue through the former Innoventions West. pic.twitter.com/AY3VluTXEj

Here, we see an aerial look at the World Celebration progress. Although plans for the previously-announced Festival Center have been axed by Disney at this time, the area still appears to be moving forward.

Aerial overview of construction site of the World Celebration neighborhood of EPCOT. Note the orange barriers forming corridors for travel in the site. Arrow shows these corridors continue through the former Innoventions West.

As Walt Disney himself said:

“That’s what Epcot is, an experimental prototype community that will always be in a state of becoming. It will never cease to be a living blueprint of the future, where people actually live a life they can’t find anywhere else in the world.”

Are you excited to see EPCOT’s new neighborhoods come to life? Are you most excited about the updates to World Discover, World Celebration, World Nature, or the World Showcase?

Plan your next Walt Disney World vacation and see all of the new and exciting offerings coming to EPCOT!