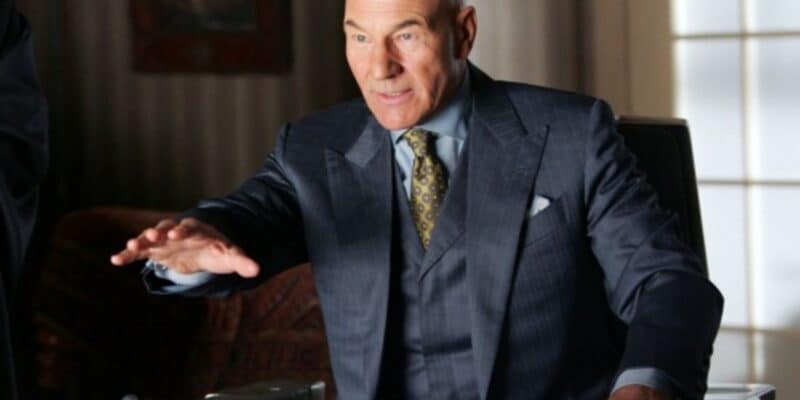 With Doctor Strange in the Multiverse of Madness (2022) now behind us, many Marvel fans are wondering whether a certain X-Men character will ever return to the Marvel Cinematic Universe (although many fans aren’t at all happy with the MCU’s use of X-Men so far).

While his cameo was ruined by the trailers, it was still a nice surprise to see Sir Patrick Stewart reprise his role as Charles Xavier/Professor X in Doctor Strange in the Multiverse of Madness (or at least a version of him), even if it was very short-lived (no pun intended).

Wanda Maximoff/Scarlet Witch (Elizabeth Olsen) wastes no time in laying waste to the beloved X-Men character, which came as a bit of a shock. But seeing as that version of Charles Xavier/Professor X is one of infinite Multiversal versions, “dead” becomes a rather loose word.

So, using Cerebro, we’ve discovered five actors who could replace Sir Patrick Stewart as Charles Xavier/Professor X in the MCU…

Giancarlo Esposito is a great actor, but we’re yet to see him play an iconic good guy. Enter Charles Xavier/Professor X. We think Esposito, who so far has played memorable villains such as Gus Fring in Breaking Bad (2008) and spin-off show Better Call Saul (2015), and Moff Gideon in The Mandalorian (2019), would make a great X-Men leader.

It goes without saying that the 64-year-old actor has star quality, and tends to steal the screen whenever he’s on it. In fact, Esposito is reportedly already in talks with Marvel to play the character in the MCU, despite Sir Patrick Stewart having reprised his role briefly in this year’s Doctor Strange in the Multiverse of Madness.

Sorry, Sir Patrick Stewart — we think you’re wonderful, but this is the Multiverse we’re talking about, so you can’t really complain about being recast!

There might be no better actor to take on the role of Charles Xavier/Professor X than Ralph Fiennes. After all, the 59-year-old British actor is best known for his phenomenal performance as the deeply unsettling Tom Riddle/Lord Voldemort in the Harry Potter movies. However, we can’t forget that the X-Men character in question is in no way a villain.

Which is just as well that Fiennes has also played one of the good guys, looking specifically at the Daniel Craig-era James Bond movies Skyfall (2012), Spectre (2015), and No Time To Die (2021). Lieutenant Colonel Gareth Mallory, or “M”,  is the Head of Secret Intelligence Service at MI6, so Fiennes is no stranger to playing the leader and making tough decisions.

And having played a dark wizard, he’s also no stranger to reading people’s minds and making things move without touching them. Needless to say, his resume would tick all the boxes.

Speaking of James Bond actors, Jeffrey Wright would also make a great Charles Xavier/Professor X. In the Daniel Craig James Bond movies, Wright plays CIA agent Felix Leiter, who is easily the most likable recurring character in the entire series. We can’t quite put our finger on it, but the 56-year-old actor has one of those voices you’d happily listen to for hours on end.

More recently, Wright played Commissioner Jim Gordon in Matt Reeves’ The Batman (2022), in which he aided the Dark Knight (Robert Pattinson) in investigating a series of murders in Gotham City, a skillset he could easily adapt to Charles Xavier/Professor X. While the mutant leader isn’t a detective per se, he does often help his fellow mutants to uncover nefarious plots.

We think it’s time Wright jumped ship from DC to Marvel (not a bad idea considering everything that’s going on over on that side of the fence…).

Jude Law is an incredibly charming actor, and in many ways, Dumbledore is similar to Charles Xavier/Professor X. They’re both respected leaders with what is essentially an army of powerful individuals at their command, they’re both headmasters at a most unusual school, and they both possess incredible powers (actually, we wonder who would win in a fight..?).

We urge Jude Law to do the same as Jeffrey Wright — leave Warner Bros. and join the MCU (although he does play Yon-Rogg in Captain Marvel, but hey, this is the Multiverse!). It’s unlikely the Fantastic Beasts movies will continue anyway, considering the last one was about as magical as Argus Filch.

We know what you’re thinking — are we “fan-casting” the beloved Bryan Cranston as Charles Xavier/Professor X simply because he winds up sporting a bald head in the hit AMC series Breaking Bad? Well, we happen to think that the 66-year-old actor can bring more to the iconic X-Men role than that (but he does look pretty cool as his villainous alter ego “Heisenberg”).

But we think that Cranston made his case in Power Rangers (2017), the reboot of the classic (and incredibly cheesy) ’90s children’s show. In the film, he plays the alien being Zordon, who is trapped in his spaceship’s computer, which means he’s a disembodied being. Nevertheless, Zordon is an incredibly powerful leader with a team of superheroes at his command.

As such, Cranston would make a fantastic X-Men leader. We can hear it now, as he faces off against his nemesis Erik Lehnsherr/Magneto — “Say my name!”

Marvel has yet to confirm any upcoming X-Men projects as part of the MCU, whether movie or television show, but Marvel boss Kevin Feige previously alluded to the mutants finally arriving at some point. However, it’s fair to say that it’s pretty inevitable at this point.

We’ll probably have to wait until Phase Six, but it’s possible that there will be more X-Men teasers in Phase Five, which begins next year with Ant-Man and the Wasp: Quantumania (2023). But it has been reported that the X-Men could arrive after Avengers: Secret Wars (2025).

Who do you think should play Charles Xavier/Professor X in the MCU? Let us know in the comments down below!