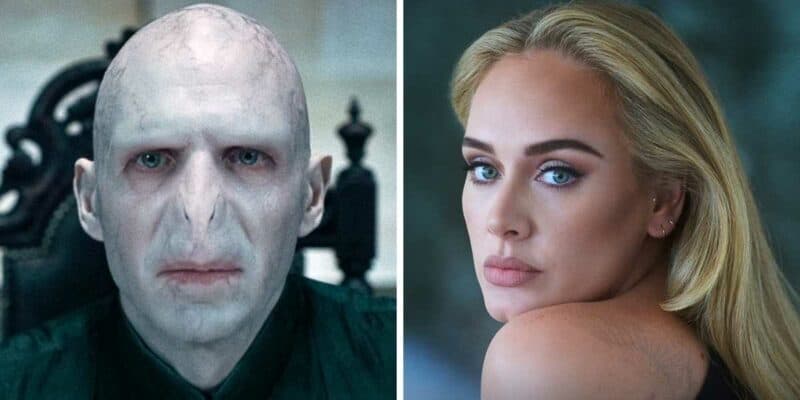 What could Lord Voldemort and Adele possibly have in common? The iconic powerhouse singer and songwriter, Adele, talks makeup and opens up about looking like Voldemort without one special touch.

As one of the world’s best-selling music artists, it’s rather difficult to compare Adele’s beauty to the Harry Potter villain, Lord Voldemort. Voldemort, or “He who must not be named”, was played by Ralph Fiennes in the Harry Potter film franchise. Fiennes wowed viewers with his impressive performance, bringing J.K. Rowling’s fictional character, Lord Voldemort, to life on screen.

Harry Potter’s archenemy, Voldemort (AKA the “Dark Lord”), has an unforgettable appearance. From the chilling death-like color of his skin to an oddly flat nose… he’s not an especially pleasing sight to look at. But, sure enough, Adele jokingly compares herself to Voldemort.

NikkieTutorials is a popular series where a beauty YouTuber named Nikkie de Jager chats with celebrities while doing their makeup. The super casual and lighthearted interview/make-up sessions are fun to watch if you’re interested in learning more about famous celebrities and makeup. Recently, Nikkie invited Adele to her NikkieTutorials.

When Nikki and Adele start talking about eyebrows, brows dye comes up in the discussion. Adele opens up saying if she doesn’t dye her brows, she looks like Voldemort. Here’s the video – (Tip: brow/Voldemort talk begins around 8 minutes and 35 seconds):

Hillarious! We love that Adele can joke with herself when it comes to makeup and eyebrow dye. With Voldemort’s lack of eyebrows, we totally get it… but no way could Adele ever pull off the Voldemort look!

What do you think of Adele fessing up that she looks like Voldemort without eyebrow dye? Let us know in the comments.

Comments Off on Lord Voldemort and Adele Have This in Common