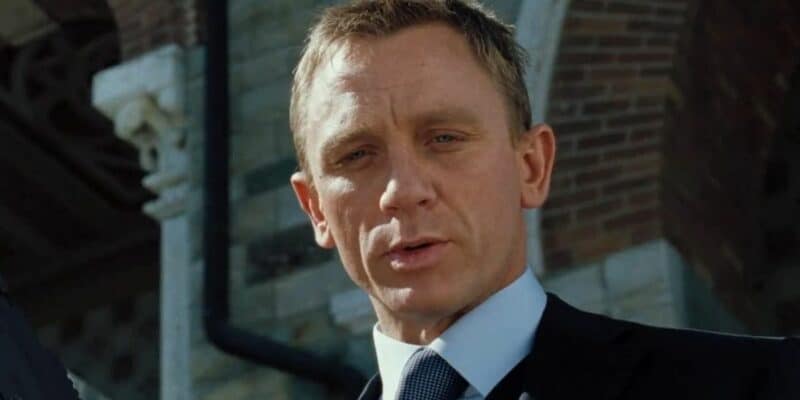 If there’s one franchise that has endured over the decades, it’s James Bond. Whether it’s Sean Connery, Roger Moore, George Lazenby, Timothy Dalton, Pierce Brosnan, or Daniel Craig, the fictional MI6 agent James Bond (AKA “007”) has entertained moviegoers for generations.

The James Bond movies are dripping with iconic cars like the Aston Martin, and lines from “Shaken, not stirred” to “The name’s Bond, James Bond”. But no “era” within the franchise has made as strong an impression on cinema as Daniel Craig’s five films.

It would take us forever and a day (good name for a James Bond movie) to rank all 25 movies in the franchise (or 26 if you include 1983’s “unofficial” Never Say Never Again starring the late Sean Connery), so here’s every Daniel Craig James Bond movie ranked from worst to best.

Marc Forster’s Quantum of Solace (2008) marks Daniel Craig’s second outing as James Bond, and while he remains the most celebrated actor to have donned the tux, the Casino Royale (2007) follow-up is, without argument, the worst of all five of his James Bond movies.

Everything that orbits Daniel Craig’s unsurprisingly solid performance, from the painfully forgettable script to the shoddy Bourne-inspired cinematography (which in itself looks a bit too shaken and stirred), is a huge mess. Even the villains are nothing to write home about.

The 2007 — 2008 Writer’s Guild of America strike led to a troubled production, and the fact that the film was churned out just a year after Casino Royale speaks volumes. Perhaps one positive to take away, though, besides Craig, is the fact that this is a sequel to the 2007 Bond re-imagining.

With the exception of Skyfall (2012), which abandons the “Spectre” thread in exchange for a more traditional outing, the rest of the Daniel Craig era James Bond movies are, for the most part, sequels, a breath of fresh air for the franchise, which likely owes thanks to Quantum of Solace.

But that’s as deep as our thanks goes. Quantum of Solace also has the worst Bond song of all five Daniel Craig films, in the form of the screechy “Another Way To Die” by Alicia Keys and Jack White. Did we expect this film to be perfect? No — we expected it to be decent, at the very least.

While fourth place hardly seems like a compliment, Spectre (2015), the second entry from Sam Mendes, is a solid James Bond movie. Where Skyfall does its own thing, Spectre revisits the story between James Bond and Vesper Lynd (Eva Green) established in Casino Royale.

In Spectre, it’s revealed that the man behind the titular organization is actually iconic James Bond villain Ernst Stavro Blofeld (Christoph Waltz), a re-imagined version of the original character played by the Halloween franchise‘s Donald Pleasance in a number of older James Bond movies.

As usual, Waltz is wildly entertaining to watch, although we can’t help but feel that, if Spectre was more in line with the tone of Skyfall, we’d have ended up with a far more memorable Blofeld. With that said, this film’s reluctance to be as outlandish as its predecessor is a wise move.

Spectre must also be credited for becoming the penultimate chapter in the series — No Time To Die (2021) was definitely no after thought, as Bond’s hanging of the tux is fully established in this film’s closing scenes, which creates an incredible amount of anticipation for the epic finale.

While not as memorable as Casino Royale, Skyfall, and No Time To Die, Spectre is still one of the best of all James Bond movies. As for the Bond song, “Writing’s On The Wall” by Sam Smith is a decent enough track, even if it never quite lives up to its epic predecessor “Skyfall” by Adele.

Casino Royale is perhaps best compared with Christopher Nolan’s Batman Begins (2005). Like that first entry in The Dark Knight Trilogy, Casino Royale is a sort of gritty reboot/prequel (re-prequel?), taking us back to the days when Bond actually gets his “license to kill”.

And as is the case with a James Bond movie, there’s plenty of glamor too, while Daniel Craig brings both a rugged charm and finesse to the role (his blue eyes quite literally look like diamonds in the rough). The chemistry between Craig and Eva Green’s Vesper Lynd is also palpable.

There’s something here for every Bond fan — sure, this is the grittiest entry, but it still knows it’s a James Bond movie, and the campy nature of almost all its predecessors isn’t entirely lost on the filmmakers. The movie also has one of the best Bond villains in Le Chiffre (Mads Mikkelsen).

Casino Royale will forever be remembered as the film that brought Bond back to life, following the disastrous Pierce Brosnan era-killing Die Another Day (2002). And while for some time it was considered the best Daniel Craig James Bond movie, it has since been bested.

Skyfall is the most fun of all the Daniel Craig James Bond movies. While the third entry hardly abandons the grit and tone of its predecessors entirely, it does inject the series with some much-needed flair, and perhaps a sprinkling of cheese too (always welcome in a James Bond movie).

That’s not to suggest that Skyfall can be compared to the likes of the wildly outlandish Roger Moore James Bond movies, but if you want to see 007 using Komodo dragons as a springboard, for example, while also getting up to all his other usual tricks, you’ll have a blast with this film.

On the other hand, Skyfall is anything but a traditional James Bond movie, which is largely to do with its heavily criticized third act. In trying to protect M (Judi Dench) from the wrath of Raoul Silva (Javier Bardem) and his men, Bond takes her to his old home in “Skyfall”, Scotland.

There, he turns the house into a giant war trench/booby trap, evoking memories of movies like Home Alone (1990) than anything you may have seen in any James Bond movie. And it’s this that causes eyes to roll with many fans, despite the entire sequence being one of the best in the film.

Without the tonal shift of Sam Mendes’ Skyfall, it’s possible that the Daniel Craig James Bond movies would have ended up in a sort of post-Bourne limbo. And thankfully, this epic third entry also raised the bar for subsequent movies, just like Adele’s “Skyfall” did for future Bond songs.

There was a time when we thought we’d never see Daniel Craig’s final 007 outing in No Time To Die. The fifth entry in the series was the first of many to have been hit hard by the COVID-19 pandemic, and as such, was pushed back a number of times before its eventual release.

While the trailer looked promising, over the course of the two years that followed its initial scheduled release, many had forgotten that there was even a new James Bond movie coming. But thankfully, after quite the journey, it finally made it to theaters late last year.

But was the latest James Bond movie worth the wait? Directed by Cary Joji Fukunaga, the fifth Daniel Craig era movie is a culmination of every entry in the series — Casino Royale, Quantum of Solace, Spectre, and Skyfall. This is where Craig’s journey as Bond comes to an explosive end.

No Time To Die is a pulse-pounding, nail-biting action thriller, and the stakes have never been higher for Bond. If you’re yet to see it, you might remember that the trailer created an uproar with fans, but Nomi (Lashana Lynch), who is indeed the new 007, is a brilliant addition to the gang.

No Time To Die delivers in spades, while Daniel Craig and Léa Seydoux are on top form. While Casino Royale flirted plenty with tragedy and heartache, nothing will prepare you for this epic farewell. Billie Eilish’ “No Time To Die” is also suitably haunting.

How would you rank all the Daniel Craig era James Bond movies? Let us know in the comments below!