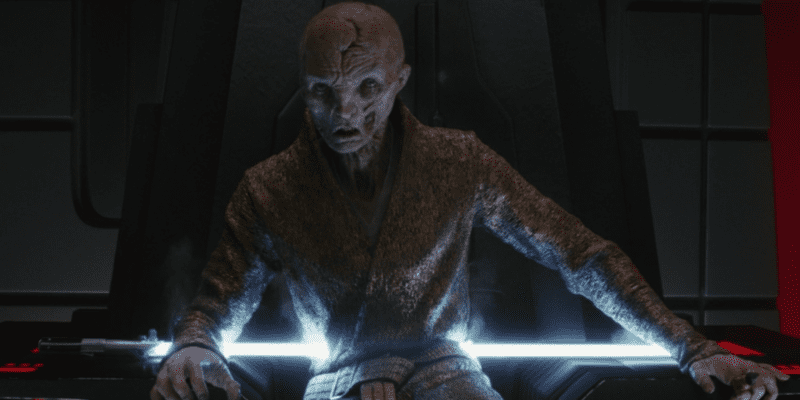 The Star Wars sequel trilogy had some plot holes, at best. At worst, it completely ruined the Star Wars universe George Lucas spent decades upon decades of his life building. No matter which Star Wars fan camp you fall into, one of the few things we can all agree upon is the fact that Supreme Leader Snoke was far from the most intriguing villain the Star Wars franchise has ever seen.

Snoke didn’t really serve many purposes throughout Episode VII – The Force Awakens (2015), Episode VIII – The Last Jedi (2017), and the conclusion of the Skywalker Saga, Episode IX – The Rise of Skywalker (2019).

His origin story was never fully explained and his primary purpose for existing seemed to be to allow Kylo Ren (Adam Driver) to ultimately take over as Supreme Leader — he was, essentially, a placeholder for the former Ben Solo without a real story of his own.

Now, fans are looking to Jon Favreau and Dave Filoni projects to help fill in the plot holes left during the divisive sequel trilogy. During The Mandalorian Season 2, the duo already started explaining Snoke’s origin better than the Star Wars sequels ever did when they introduced Dr. Pershing (Omid Abtahi) and his clone experiments for Moff Gideon (Giancarlo Esposito).

Then, Filoni used his latest Star Wars animated series, Star Wars: The Bad Batch, to clarify even more about the role clones like Snoke played both on Kamino and in the larger Star Wars story.

The Bad Batch began right where Star Wars: The Clone Wars ended in the Star Wars timeline. In Episode 1, “The Aftermath”, we found ourselves in the middle of the fray during the execution of Palpatine’s execution of Order 66, watching a confused Clone Force 99 — Hunter, Wrecker, Tech, Echo, and Crosshair (Dee Bradley Baker) — try to understand why all of the clone troopers around them just turned on the Jedi Generals they had served for years.

While the first season of the Clone Wars spinoff was airing, one Star Wars fan theorized that the Kaminoans might be even more closely tied to Snoke, The Mandalorian‘s Dr. Pershing’s experiments on Grogu, and even sequel trilogy heroine Rey (Daisy Ridley) than we ever knew:

I theorize Kaminoans figured out how to clone Force sensitive users with Omega and because Tarkin will completely stop the clones, Kaminoans will refuse to give the info on how to clone force sensitive users to the empire. Somehow, the Empire will find out by Omega most likely. And then Palpatine will send Vader to retrieve the info. Kaminoans will refuse and Vader will kill them all basically erradicating the entire Kaminoan species. This is why we only see “human” Kaminoans in Mando.

While this isn’t, of course, exactly how things played out in The Bad Batch Season 1, the notion still makes some intriguing points, like the fact that Omega (Michelle Ang) could potentially be the perfect Force-sensitive clone — not Force-sensitive, but disfigured, like Snoke, or attractive, but “useless,” like Rey’s father.

Now, with The Mandalorian Season 3 debuting in February 2023, Star Wars fans are once again speculating about how Snoke could tie into the larger Star Wars story.

Do you think this was Snoke in the Mandalorian? Or do you think this guy is a result of different experiments? (considering Snoke was made on Exogol) from starwarsspeculation

Commenters began weighing in right away, with one fan posting a well-thought-out idea:

I think it’s definitely a Snoke. Not the one we see in the ST, but a step toward him. It has a lot of Snoke features.

Palpatine has a lot to work with on Exegol. He has Luke’s hand, his own clones and possibly Grogu’s blood. I get the idea that Snoke might be a sort of Frankenstein’s monster of these elements.

While he’s working on perfecting his own clone bodies to inhabit his power (I think The Bad Batch is kind of going in this direction) they might have accidentally created Snoke and Palpatine saw it as the perfect place holder until he himself was ready.

Although some fans debated if it is, in fact, Star Wars canon that Palpatine has Luke’s hand at this point, most agreed with the sentiment of the post. Another reader concurred, replying:

That would actually be pretty cool to see: a sort of gothic movie / comic book where Snoke is created. It would retroactively make him a much more interesting character.

Other Star Wars viewers are also hoping Favreau and Filoni further explore this part of the sequels, expressing thoughts like, “I know Snoke was a plot device in the movies, but man, I’d actually love to see more Snoke in live action or animation. The rise of the First Order and Sith Eternal has the potential to be really interesting,” and “I’m hoping that all of this mando verse type stuff is setting that up. It’s one part of the sequels that I can see really looking better in hindsight.”

Then, many Mandalorian stars returned in The Book of Boba Fett, setting up the basis for the third season of the popular Star Wars show, which put Disney+ on the map upon its November 12, 2019 debut.

Although Carano has since been fired, the rest of the “Mando-Verse” cast is expected to return for the third season of the incredibly popular series.

What do you think? Will Snoke factor into The Mandalorian saga moving forward?