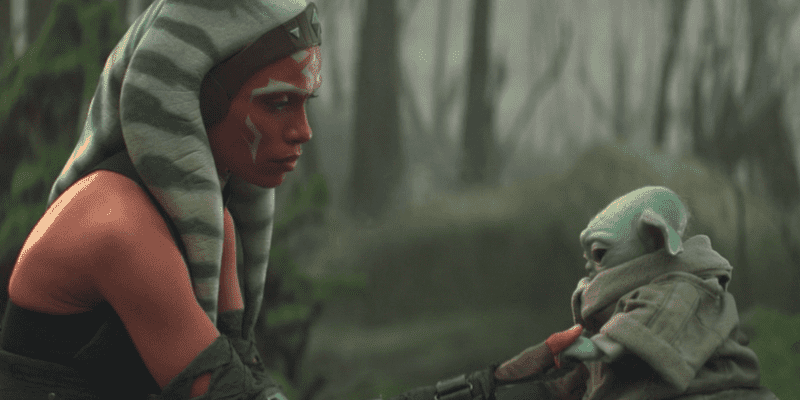 When The Mandalorian Season 2, Episode 5 (“Chapter 13: The Jedi”) premiered, fans of Star Wars: The Clone Wars and Star Wars Rebels were granted two huge reveals thanks to director Dave Filoni.

As Djarin said, “A Mandalorian and a Jedi, they’ll never see it coming” — and they didn’t.

During her battle with Elsbeth, a second major animated character was introduced into the live-action canon. The Togruta successfully defeated Elsbeth, but not before learning that Rebels’ blue-skinned villain, Grand Admiral Thrawn (Lars Mikkelsen), was behind all of the Magistrate’s ministrations on Corvus.

Although Djarin tried to leave his tiny foundling, Grogu (AKA “Baby Yoda”) with Tano to train, she refused, and, ultimately, the little Force-sensitive being ended up in the care of Star Wars icon, Jedi Knight Luke Skywalker.

Then, in Filoni’s “fever dream” episode of The Book of Boba Fett — “Chapter 6: From the Desert Comes a Stranger” — Tano returned, this time convincing Djarin that seeing Grogu would do more harm than good for the fledgling Jedi.

Now, Filoni has admitted that he and Mandalorian creator Jon Favreau have been at odds over Tano’s “Mando-Verse” story. In the new book, “The Art of The Mandalorian: Season 2,” Filoni shared:

“There were a lot of debates about [Ahsoka Tano pointing the way to Luke Skywalker]. And Jon and I went back and forth, because if [Ahsoka can’t take Grogu], then who will?”

“Taking care of the Child is not her destiny. That’s not what I’ve been planning for her to do [laughs], so I can’t change it up.”

Filoni went on to share part of his vision for Tano’s future in The Mandalorian saga:

“But it is interesting if Ahsoka’s there along the way, not as somebody who takes this burden away from Mando but as somebody to say, ‘You might be forgetting that this kid has a choice too. It’s not just about you and your oath to your covert.'”

Fans can next expect to saw Dawson in either The Mandalorian Season 3 — reportedly debuting in December 2022 — or her spinoff series, Ahsoka. The latter will presumably see its title character enter the World Between Worlds on her quest to find Grand Admiral Thrawn (Lars Mikkelsen) and fellow Jedi Ezra Bridger (Mena Massoud).

What do you think about Favreau & Filoni being at odds over Ahsoka Tano’s Star Wars future?